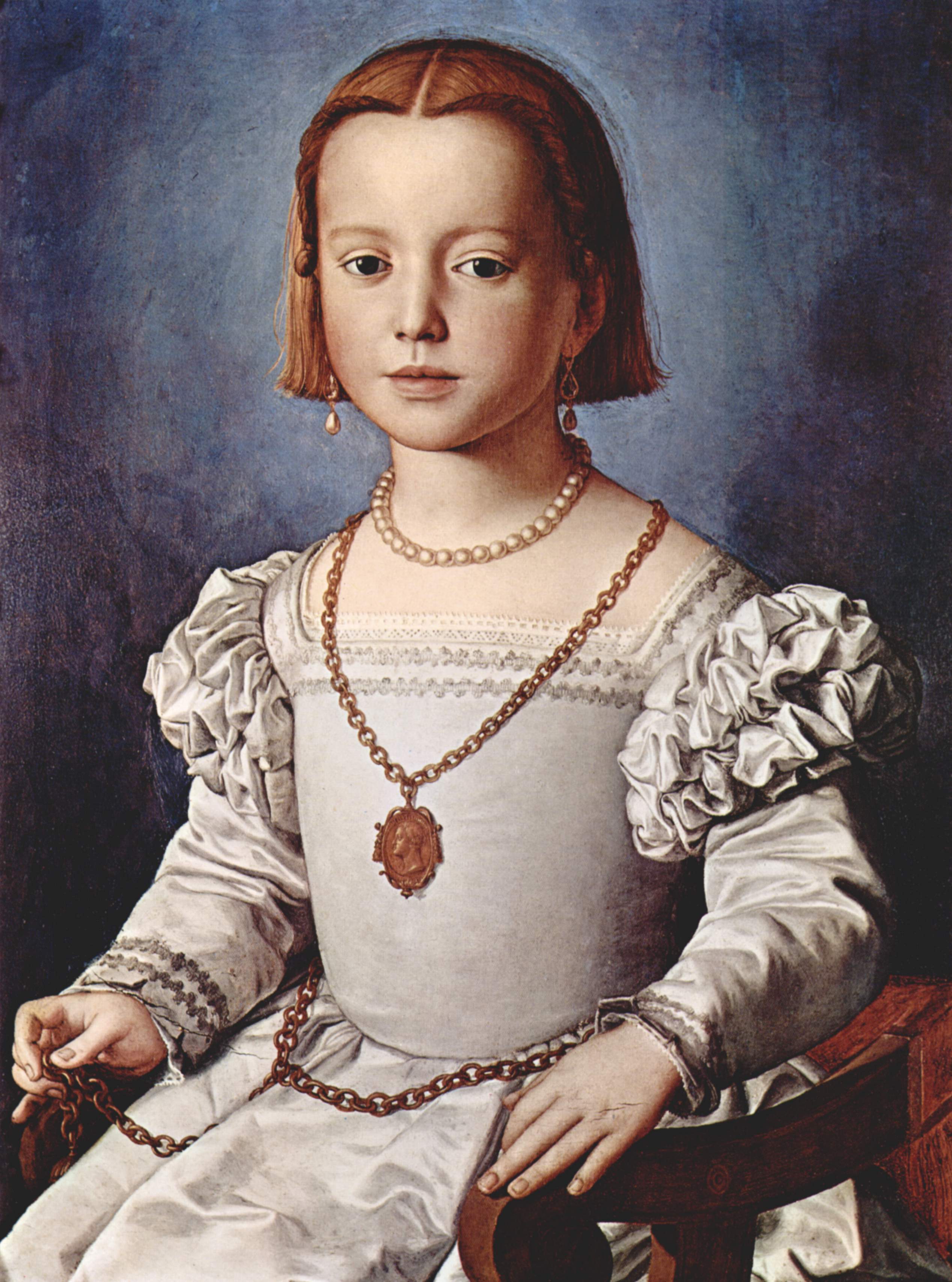 “The painting portrays Bia, one of the two illegitimate daughters of Cosimo I, who died in 1542 when she was only five years old. It is one of the loveliest portraits executed by Bronzino for the Medici family. The girl, who wears a medallion with the profile of Cosimo around her neck, is portrayed with an expression of lucid fixity, in perfect accord with the enchanted happiness of childhood, and her very slight smile creates a magical air of suspense. The background, abstract as in many other portraits by Bronzino, is of an almost enamelled lapis lazuli.”

“Bianca de’ Medici, usually known as Bia de’ Medici, (c. 1536 – 1 March 1542) was the illegitimate daughter of Cosimo I de’ Medici, Grand Duke of Tuscany, born before his first marriage, painted shortly before 1542, when the child died at the age of five. After her death of a fever, some art historians believe her father commissioned a painting of her by Agnolo Bronzino that is one of his most famous works. The posthumous painting of Bia has inspired works of art by modern artists such as American sculptor Joseph Cornell.

The identity of Bia’s mother is not known, but Cosimo I was likely no older than sixteen when he fathered her. According to Edgcumbe Staley’s The Tragedies of the Medici, some stories said the girl’s mother was a village girl from Trebbio, where the Medicis had built one of their first villas, while others said she was a gentlewoman from Florence. Only Cosimo I and the girl’s paternal grandmother, Maria Salviati, knew the identity of the girl’s mother, but Salviati refused to reveal it, though she did acknowledge Bia was the daughter of Cosimo.

Staley wrote that the little girl was called La Bia, short for Bambina (little girl or baby). The name might also have been short for Bianca. Staley wrote that her father’s new wife, Eleonora di Toledo, refused to tolerate her presence in the palace after their marriage, so Cosimo sent her off to the Villa di Castello, her paternal grandmother’s chief residence north of Florence. However, other more reliable reports indicate that her stepmother “brought her up very lovingly.” Her paternal grandmother supervised the nurseries for all of the children of Cosimo I. All of them, not only Cosimo’s illegitimate daughter, spent most of their time at the Villa di Castello and were raised by nurses, with minimal day-to-day contact with their parents, though both Cosimo and Eleonora heard reports of their progress and offered directions for their education, their living arrangements, and the clothing they wore. Bia shared her nursery with Giulia de’ Medici, the illegitimate daughter of Alessandro de’ Medici, Duke of Florence, who was close to her in age. She grew into a high-spirited, loving little girl who kept her grandmother and nurses entertained with her antics. Bia’s father adored his first-born child, and her paternal grandmother, Maria Salviati, said the little girl “was the comfort of our court, being so very affectionate.”

Both Bia and her cousin Giulia contracted a fast-moving fever in February 1542, from which Giulia recovered but Bia did not. Cosimo I received almost daily reports of Bia’s worsening condition from his mother, Maria Salviati. The child grew weaker between 25 February and 28 February and finally died on 1 March 1542. She was buried in the Medici family crypt in San Lorenzo.

When her legitimate half-sister Isabella de’ Medici was born six months after her death, her father rejoiced to have another daughter. Contemporaries who might normally have consoled him on his wife’s failure to present him with a second son instead congratulated him on her birth, knowing how he had grieved for the loss of Bia. “(I) congratulate you on the beautiful baby girl God has conceded to you in recompense for the one he has taken to join him in paradise,” wrote Paolo Giovio after the birth of Isabella. A comparison of portraits of Bia and Isabella reveal that, had she lived past early childhood, Bia likely would have closely resembled her half-sister Isabella, who shared her reddish-blonde hair, brown eyes, and dainty features.

After her death, many art historians believe her father commissioned a posthumous painting of her by Agnolo Bronzino, which art historians regard as one of his finest works. The work is 63 cm by 48 cm and was painted in tempera on wood. In the famous painting, which is on display in the Galleria degli Uffizi in Florence, Bia wears a medallion with her father’s profile on it, emphasizing her bond with her father. Her complexion is a pale white because Bronzino painted the portrait using her death mask as a model. It was not an official state portrait, but would have hung in the family’s private rooms as a reminder to them of the dead child and an inspiration and guide on the path to salvation. As art historian Gabrielle Langdon argues, Bronzino painted the child with a halo effect, in “light-emitting white satin and pearls” as a metaphor for both her name “Bianca,” which means “white” and her childish innocence. “Like (Petrarch‘s) ‘Laura,’ the posthumous Bia is a riveting emanation from Heaven who bestows purifyinggrace on the beholder,” Langdon wrote in the 2004 collection The Cultural World of Eleanora Di Toledo.

Maike Vogt-Lüerssen argues that the famous painting actually depicts Bia’s younger, legitimate half sister, Maria de’ Medici. Vogt-Lüerssen noted in an article in Medicea – Rivista interdisciplinare di studi medicei that the subject of the portrait was identified as Maria until the 1950s and the pearls depicted in the portrait were a common symbol of the Medicis, often worn by legitimate female members of the house. Vogt-Lüerssen believes that the child depicted in a famous portrait by Pontormo with Maria Salviati is actually Bia, her eldest granddaughter, because group portraits in that era depicted family members with close blood relationships and Salviati’s two younger granddaughters, Maria and Isabella, were too young at Salviati’s death to be the 5- or 6-year-old girl in the portrait.

Regardless of which Medici daughter it depicts, the painting has continued to inspire modern artists. American sculptor Joseph Cornell‘s 1948 sculpture Medici Princess incorporates Bronzino’s portrait of the girl. The sculpture, one of a series depicting members of the Medici family, shows an enameled reproduction of Bronzino’s portrait in a dark wooden box, behind a blurred, deep blue glass pane. On either side of the main portrait are smaller vignette reproductions of the same portrait, behind glass as well. Below the girl’s image, in a pull-out drawer, are a feather and a floor plan of the palace in Florence that was once her home. The sculpture, which is owned by a private collector, was on display during a recent retrospective of Cornell’s work originating with the Smithsonian American Art Museum.”