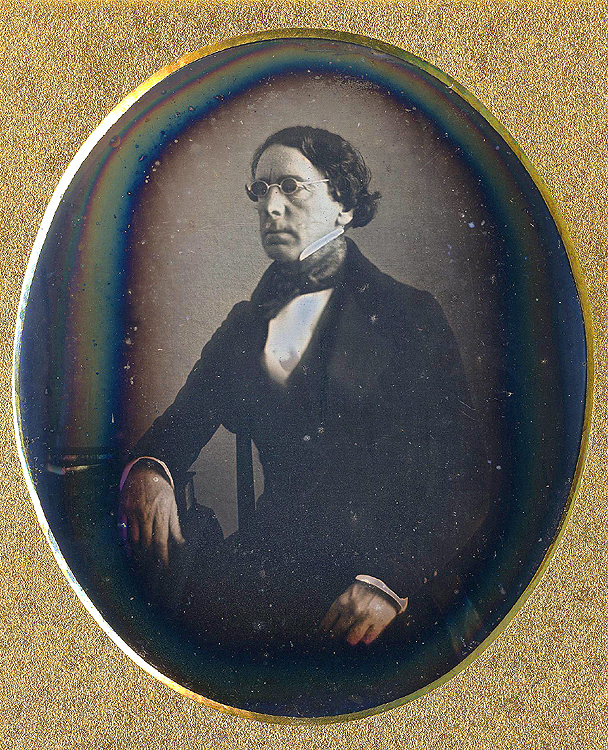 “Edward White asked his subject to turn his body away from the camera, which was moved backward about two feet. He instructed his patron to rest his left hand on his left thigh and partially close the fingers. The other hand flows over the front edge of a large book, resting on a dark cloth. A large hole under his arm reveals part of the small, wooden chair, and we can see through to the backdrop. The side of the man’s expansive jaw, anchored to a very strong chin, is now fully apparent. The lenses of those wire-rimmed glasses that lie on the ridge of his long nose are panes of murky darkness. That effect indicates White either placed a dark scrim near the sitter or the lighting was so compact, the area beyond the operator was cast in a twilight darkness. Further evidence of White’s mastery of lighting is quickly manifest when the piece is viewed. The aristocrat’s heavily veined hands, so marvelously positioned, are bright beacons, leading upwards into the depths of remarkable canyons of darkness, breached by his white shirt and sliver of starched collar. Then his craggy kisser is completely clear. Naturally, the reflected depth is incredible. The piece has concentric rings of multi-hued patina that add to my viewing pleasure. This trio of works indicates Edward White was not only a highly successful supplier to the daguerreian artisans, but he a remarkably skilled performer during the very early period, with a dramatic artistic flair and a keen sense of advertising all rolled together in a neat package. All that is left to decipher is the identity of his prominent sitter!

Like so many of the first people to pose for the camera, White’s subject was obviously a successful, prominent person. Some were politicians, others highly regarded ministers, doctors, lawyers or merchants, et al. They all had one common thread among them: They were wealthy enough to afford a sixth-plate portrait! Or, they were friendly with the operator. Naturally, before White shot his gentleman, the experimenters might have used anyone able to withstand the torture of brilliant light, a cold iron clamp secured tightly to their head and the long tedious minutes of necessary motionlessness. Often their wives or children.”