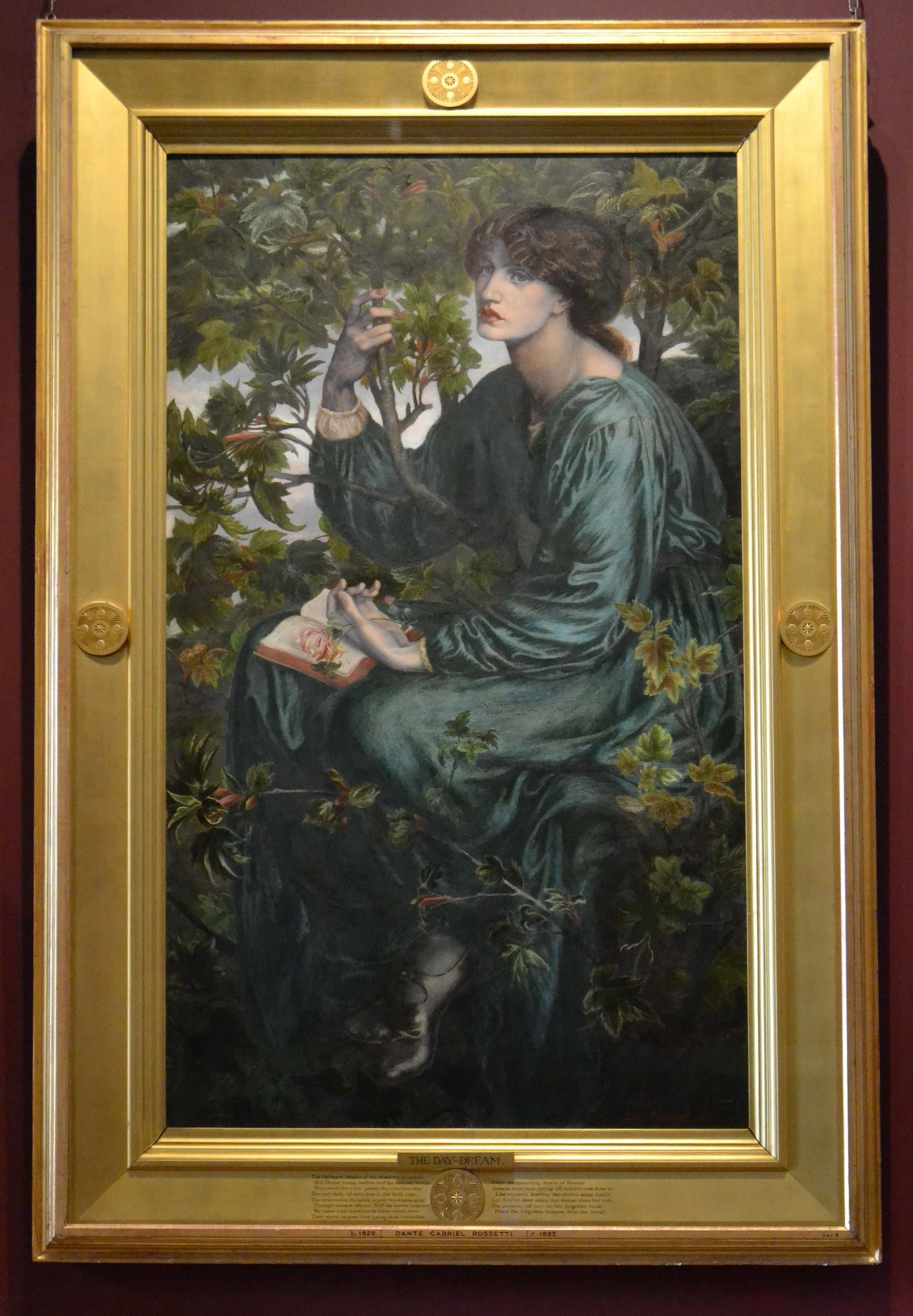 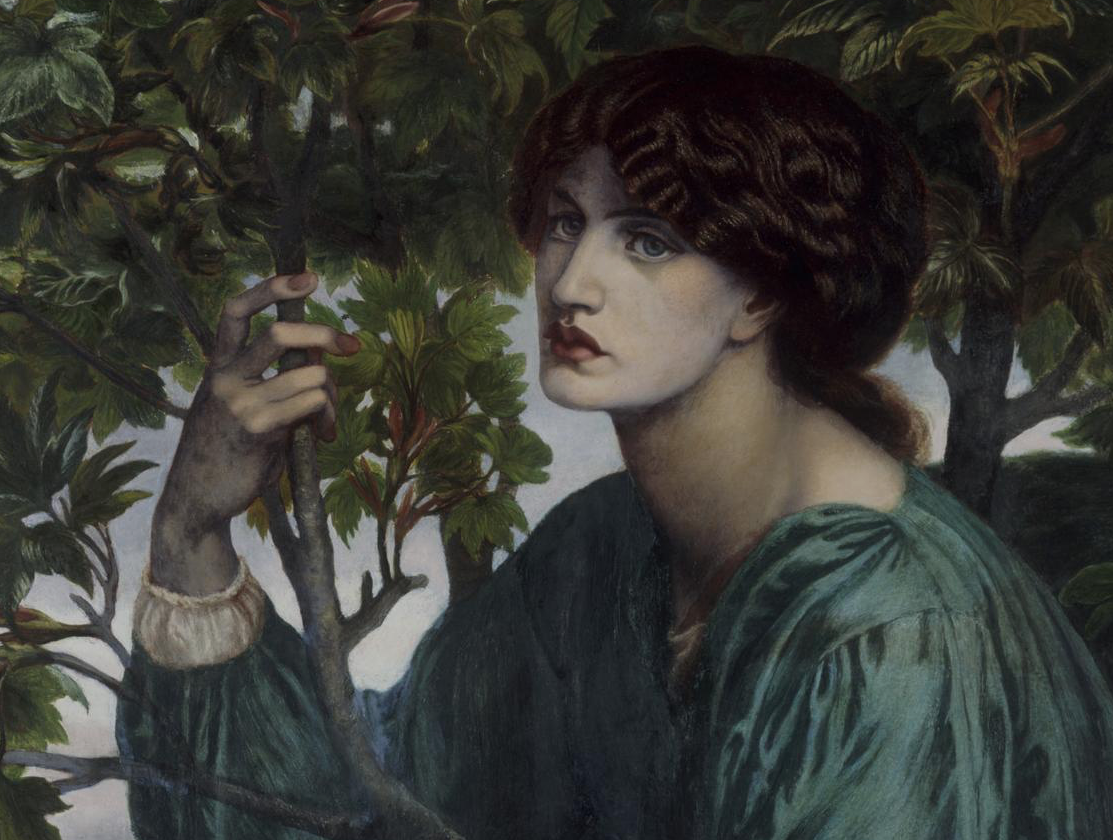 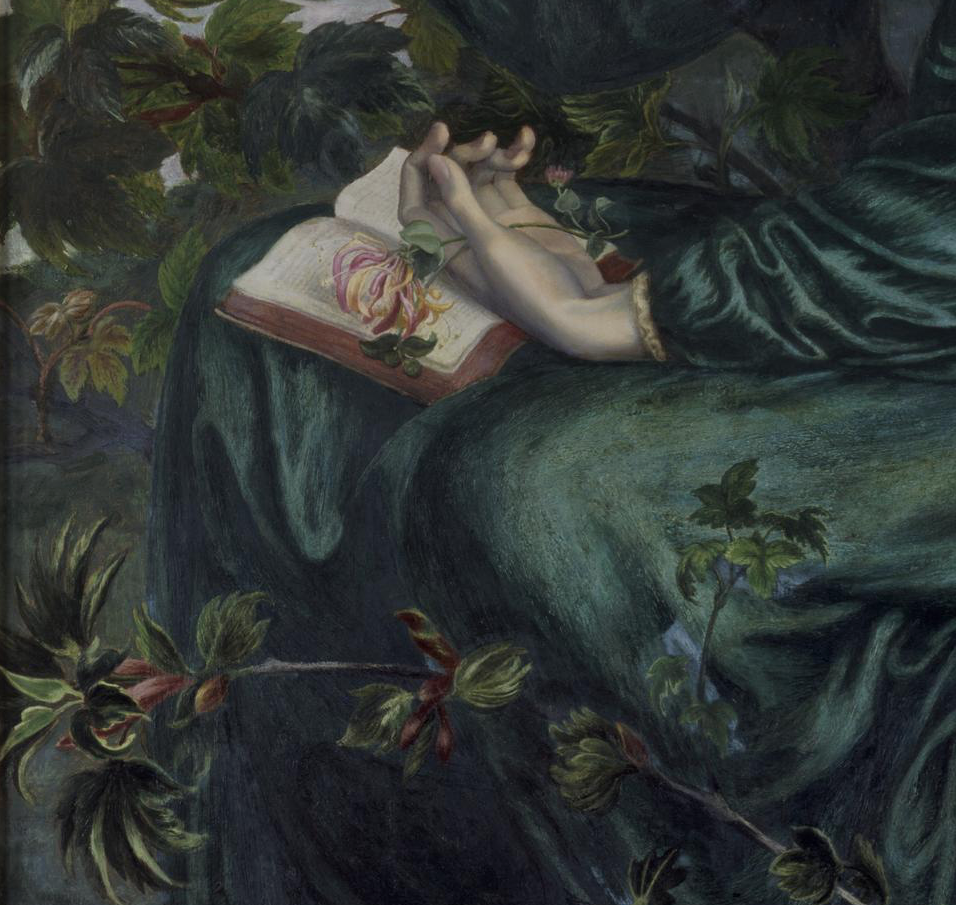 The Day Dream or, as it was initially intended to be named, Monna Primavera, is an oil on canvas painting by the Pre-Raphaelite Brotherhood founder Dante Gabriel Rossetti. The work, which measures 158.7 centimetres (62.5 in) in height by 92.7 centimetres (36.5 in) wide, was undertaken in 1880 and depicts Jane Morris posed in a seated position on the bough of a sycamore tree. A small stem of honeysuckle is in her hand, a token of love in the Victorian era, that may be an indication of the secret affair the artist was immersed in with her at the time. The artwork was left to the Victoria and Albert Museum by Constantine Alexander Ionides in 1900.

The sitter for this painting was Jane Morris, the wife of William Morris, who often posed for Rossetti. At the time this was painted Rossetti was involved in an illicit love affair with Jane. He shows her sitting in the branches of a sycamore tree and holding a sprig of honeysuckle. This sweet-smelling climbing plant symbolised the bonds of love for the Victorians, and Rossetti may have included it here as a subtle reference to the relationship between artist and model. Rossetti was also a poet, and the title relates to his poem of the same name which ends:

She dreams; till now on her forgotten book
Drops the forgotten blossom from her hand.

Rossetti’s last finished work, to which he gave great attention, considering the numerous letters he sent to his patron while executing the painting. He was confident with the quality of the painting, and wrote to Ionides on 18 march 1880: ‘I am glad to say it is far advanced & will be beyond question as good a thing as I ever did.‘ (National Art Library, 86.WW.1
MSL/1979/2601/2)

Rossetti was very directive concerning the way the work should be exhibited in Ionides’ home: ‘The picture itself need not stand more than a foot at very utmost from the ground, to be seen to advantage by a seated person. (…)The picture should slope forward (…). It should be as far away from the white dado as possible, & the stand not made light but dark. The picture cannot help looking dull otherwise, though it is very brilliant if it gets a chance. It ought to stand with the light from the left of spectator, as here, otherwise it will lose in effect.‘ (undated letter, private collection).

The Daydream is one of the last major oils executed by Rossetti before his death. The idea for the painting was first mentioned by the artist in 1872, but hints of the composition can be seen in many of his earlier drawings of Jane Morris (the model for this work). There are also photographs of Jane Morris, posed by Rossetti in 1865, which show his preoccupation with a certain way of portraying his close friend and confidante. The mood of the sitter and the style of the dress that Jane Morris wears is particularly reminiscent of The Daydream. In fact this work perfectly expresses Rossetti’s vision of women. For years he was obsessed by a particular type of female beauty, epitomized by his wife and model Elizabeth Siddal, and Jane Morris. The break from the Pre-Raphaelite Brotherhood in the early 1850s enabled him to develop a more personal poetic vision and explore themes from Dante and the idea of courtly love.

The Daydream is the culmination of his sense of fantasy and the way in which he wished to elevate and deify women he admired. A large woman seated in a highly decorative tree, with leaves resembling William Morris wallpaper, at first presents an odd juxtaposition, but as a portrayal of a mood the painting works very well. Originally Rossetti called it ‘Vanna Primavera’. This is a reference to Dante’s Vita Nuova, when Guido Cavalcanti’s love Primavera is described as going before Beatrice as Sprinz precedes Summer. From a lengthy correspondence with Jane Morris it appears that the painting presented Rossetti with many problems. The main one was to link the seasonal theme of Spring with appropriate flora, which would in turn enhance the overall design of the picture. The original drawing for The Daydream, now in the Ashmolean (see image below), shows Jane Morris holding a convulvulus flower. In the final painting honeysuckle was chosen, to match the rather full blown sycamore leaves of the tree. 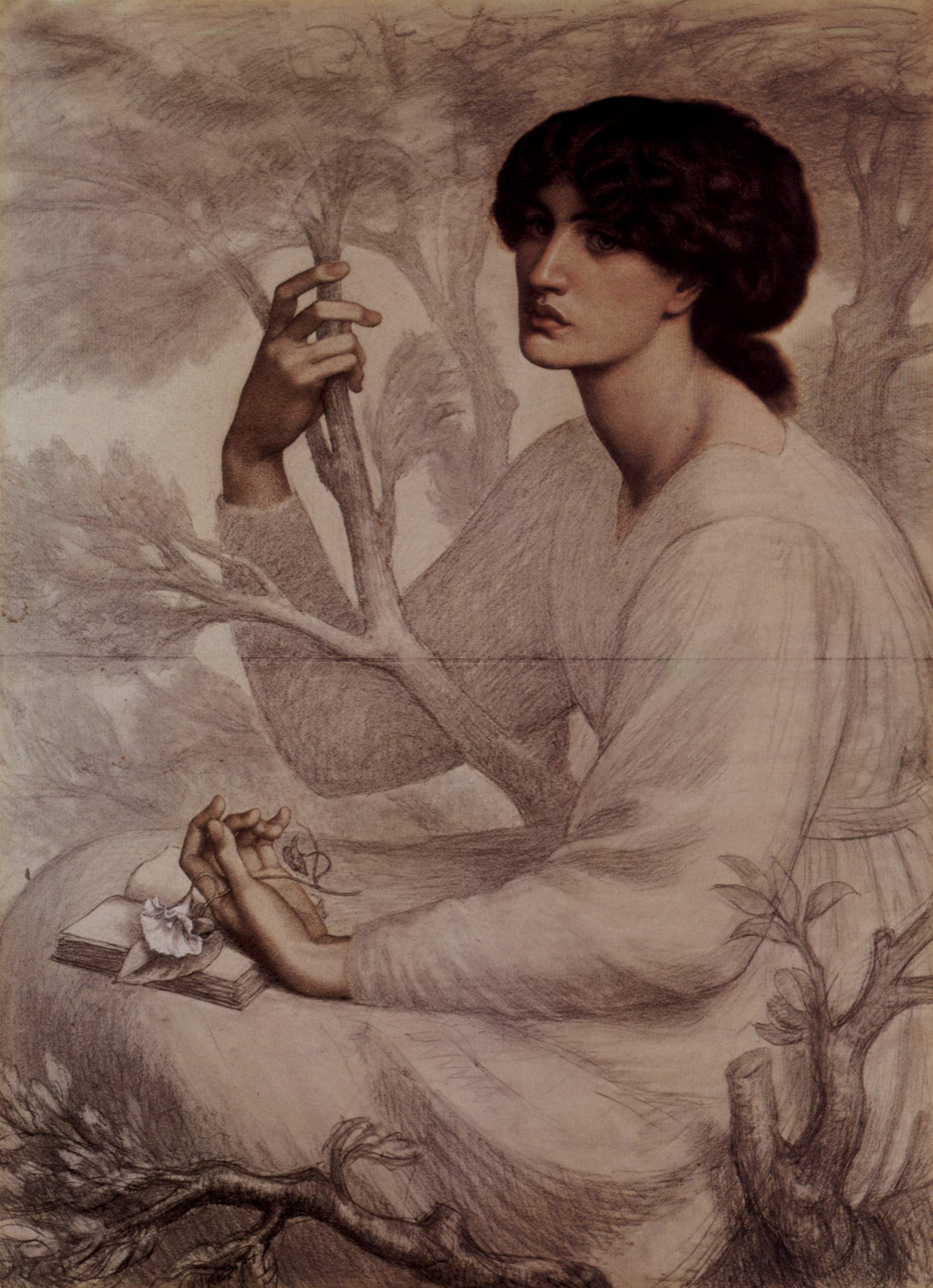 The painting of the figure, especially the head and hands was reworked several times. There is a heaviness and lassitude about the female form which probably reflects Rossetti’s own tiredness and approaching death. The static nature of the piece enhances the mood of dreamlike contemplation, summed up so well in a few lines from the sonnet Rossetti wrote to accompany the work:

‘Within the branching shade of Reverie
Dreams even may spring till autumn; yet none be
Like Woman’s budding daydream spirit fann’d.’

The subject matter of this work evolved through a number of vicissitudes. It began as a drawing of Jane Morris, certainly in existence by 1872, when Rossetti referred to it Simply as ‘the lady seated in a tree with a book in her lap‘ (D & W, III, pp. 1067-8). Thus the visual image, as often in Rossetti’s work, seems to have predated any specific idea for a subject, although the resonances of the motif of the woman in a tree are intriguing. As Andrew Wilton has noted, this motif, important in the Symbolist art of the later 19th century, might recall any of the women in ancient myths who are metamorphosed into trees, or Eve and the Tree of Knowledge (Wilton and Upstone 1997, p. II; perhaps the book alludes to the idea of knowledge).

In 1879 Rossetti was commissioned to execute the design as a full-scale painting, and he worked assiduously at it throughout the next year. At first he called it Vanna Primavera, with reference to a passage in the Vita Nuova in which Dante sees a woman called Giovanna (‘Vanna’) but nicknamed ‘Primavera’ (or ‘Spring’) walking before Beatrice (D.G. Rossetti 1911, p. 331). But the spring flowers Rossetti planned, a snowdrop and a primrose, proved too delicate for the extraordinary shape of Jane Morris’s hand, as painted by Rossetti; meanwhile, the foliage of the sycamore tree grew too full for the season. Finally he abandoned the spring subject and renamed the picture The Day Dream. The new title preserves the emphasis on dreaming characteristic of many of Rossetti’s Dante subjects; it also recalls the earlier drawing of Jane Morris, Reverie (cat. 139). Finally, Rossetti wrote a sonnet, which clearly relates not to the first conception of the picture, but to the way it had developed in the working process:

The thronged boughs of the shadowy sycamore
Still bear young leaflets half the summer through;
From when the robin ‘gainst the unhidden blue
Perched dark, till now, deep in the leafy core,
The embowered throstle’s urgent wood-notes soar
Through summer silence. Still the leaves come new;
Yet never rosy-sheathed as those which drew
Their spiral tongues from spring-buds heretofore.

Within the branching shade of Reverie
Dreams even may spring till autumn; yet none be
Like woman’s budding day-dream spirit-fann’d.
Lo! tow’rd deep skies, not deeper than her look,
She dreams; till now on her forgotten book
Drops the forgotten blossom from her hand.

The picture is among Rossetti’s finest designs, particularly in the subtle management of shades of green (the dress appears to be the same green silk as in Astarte Syriaca, cat. 153, and Proserpine, cat. 155) and in the complex intertwining curves of the limbs and branches. Most fascinating of all is the honeysuckle, slightly wilted, in the long, wan hand resting wearily on the book – ‘forgotten’, as the sonnet says, along with the spring subject, but at the same time a poignant reminder of the importance of flowers, as symbols of perfect beauty, throughout Rossetti’s work.”