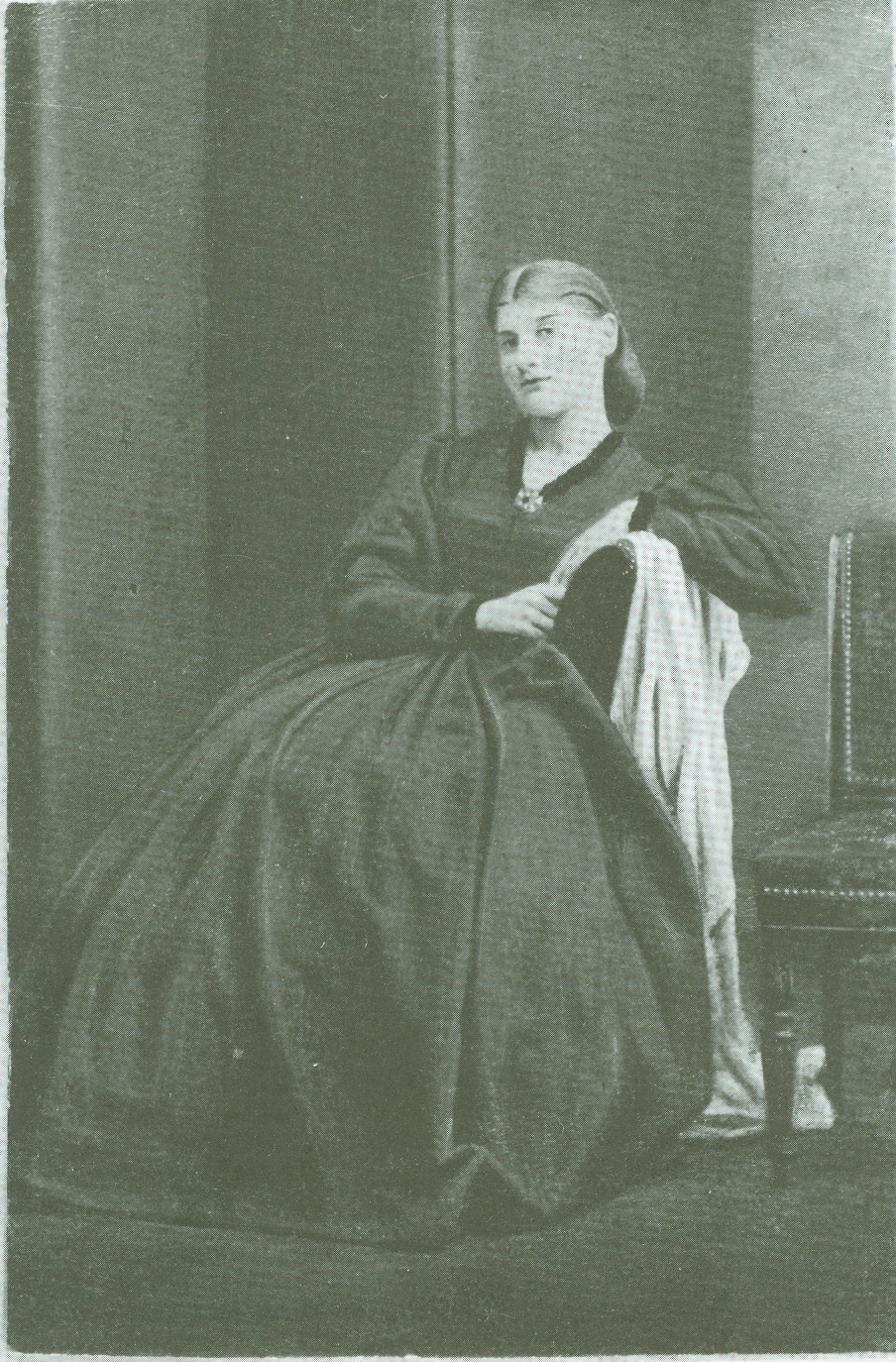 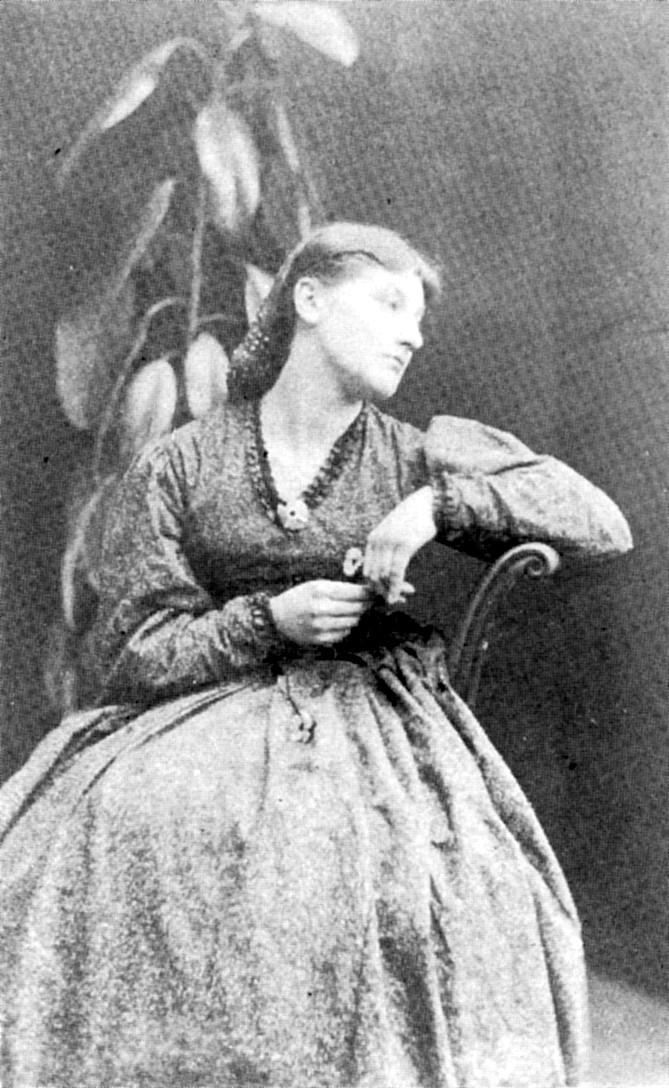 Alexa Wilding (born Alice Wilding, c. 1845–48 – 25 April 1884) was one of the favourite models of the Pre-Raphaelite artist Dante Gabriel Rossetti, featuring in some of his finest paintings of the later 1860s and 1870s. She sat for more of his finished works than any other of his more well-known muses, including Elizabeth Siddall, Jane Morris and Fanny Cornforth.

Comparatively little is known about Wilding, while Rossetti’s other models, Siddall, Morris and Cornforth, are frequently written about. This is perhaps partly due to the lack of any romantic or sexual connection between the pair, which differentiates Rossetti’s relationship with Wilding from those with his other muses.

Alexa Wilding’s working-class family originated from Shrewsbury, Shropshire, in England, while Alexa herself (then Alice) was born an only child in Surrey in approximately 1845. Her father was a piano-maker, while her father’s brothers were butchers. According to the 1861 census, when she was about 16, Wilding was living at 23 Warwick Lane near Newgate Market in London with her 59-year-old grandmother, two uncles and baby cousin. She was a working girl, but her standard of life is not thought to have been terrible for the time, and she could read and write. By the time of her association with Rossetti, she was living with an aunt and working as a dressmaker with ambitions of becoming an actress.

Wilding was first seen by Rossetti in 1865, when she was walking one evening along the Strand. He was immediately impressed by her beauty. She agreed to sit for him the following day for a proposed painting of Aspecta Medusa, but failed to arrive as planned; it is possible that she was put off by the morally dubious reputation of models at that time. Weeks went by, and Rossetti had given up the idea of the painting he had in mind, so important did he consider the look of this specific model to it, when he spotted her again in the street. He jumped from the cab he was in and persuaded her to be led straight back to his studio. He paid her a weekly fee to sit for him exclusively, afraid that other artists might also employ her. The two shared a lasting bond; after Rossetti’s death in 1882, Wilding, though not particularly financially well off, was said to have travelled regularly to place a wreath on his grave in Birchington-on-Sea.

In the 1881 census, an Alice Wilding, aged 34, was living at 33 Redcliffe Road, Kensington, with two young children, Charles and Nellie Wilding, who are listed as her own children. Since Wilding never married, it could be that these were the children of her uncle who is thought to have died along with his wife. Her age in this census is a few years younger than it should be according to the 1861 records, but it was not uncommon for women of that time to do this; alternatively it is possible that her uncle could have provided the wrong information originally. By this time she held a position as a landlady and property-holder, a considerable achievement for a working-class woman. In his letters to Dunn from 1873, Rossetti complains about Wilding’s housing situation, since he seems often to have been called upon to lend her money towards it; “Surely A.W. will now get rid of this mad house of hers.”

The death certificate issued for Alexa Wilding records her death on 25 April 1884, aged 37, the first official record of her name as Alexa rather than Alice. The cause of death was peritonitis for six days and eventual exhaustion; sixteen months earlier she had been diagnosed with a splenic tumor. This may be the disease that had previously caused Rossetti to think her ill, and prevented her sometimes from keeping her sittings.

She is buried in Brompton Cemetery, along with her grandmother, Mary Ann, and niece, Marie. While her death certificate states the date of her death as 25 April, her tombstone lists it as 24 April 1884.

In Rossetti’s paintings, Wilding’s elegant looks and ethereal beauty were in contrast to another of Rossetti’s models, the voluptuous Fanny Cornforth. Wilding’s more refined features were substituted for Cornforth’s in Lady Lilith (1864–68), in part when Rossetti’s patron and owner of the painting Frederick Leyland considered the original too earthy. Similarly, the painting Venus Verticordia (1864–68), originally modelled by a near six-foot-tall cook, was repainted with Wilding’s face in January 1868. Rossetti seems to have considered her features versatile enough for the roles of both virtue, for example Sibylla Palmifera, and vice, as in the paintings mentioned here, in roles previously reserved for Cornforth.

Contemporaries seem to have disagreed over Wilding’s capacity for expression: Rossetti’s assistant, Henry Treffry Dunn said of her that she was “… without any variety of expression. She sat like a Sphinx, waiting to be questioned, and with always a vague reply in return… But she had a deep well of affection within her seemingly placid exterior.” The artist’s brother, William Michael Rossetti, meanwhile saw her as “capable of much varying expression.”

Dunn described Wilding as having “a lovely face, beautifully moulded in every feature, full of quiescent, soft, mystical repose that suited some of his conceptions admirably… He was struck with her beautiful face and golden, auburn hair. It was the very type of face he had been seeking so long.” Wilding’s features are easy to spot in Rossetti’s art; the red hair, long neck, perfect Cupid’s bow lips, and somewhat softer eyes compared to Lizzie Siddall’s famed heavy-lidded ones. However, in The Blessed Damozel (1975–78), Wilding’s features are less discernible thanks to Rossetti’s portrayal of her with his late wife’s eyes. Additionally two of Rossetti’s paintings featuring Wilding are similar to those originally modelled for by his late wife Lizzie Siddall, Regina Cordium and Damsel of the Sanct Grael. According to his close friend, the art critic Frederic George Stephens, “nothing he drew of her, diverse as the delineations were, seemed less than an exact likeness.”

Paintings of Alexa Wilding. Those by Rossetti include:

Drawings by Rossetti include: