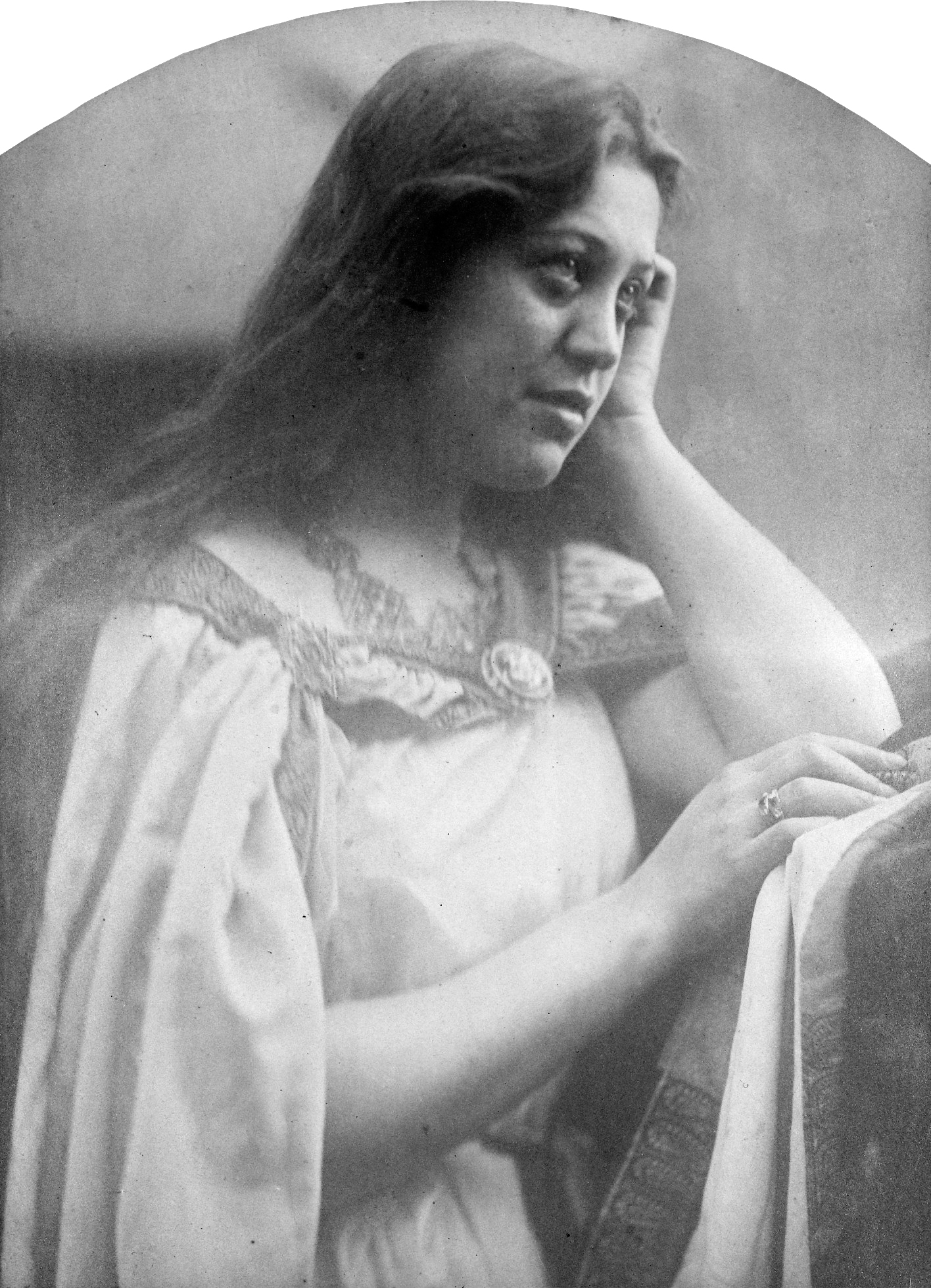 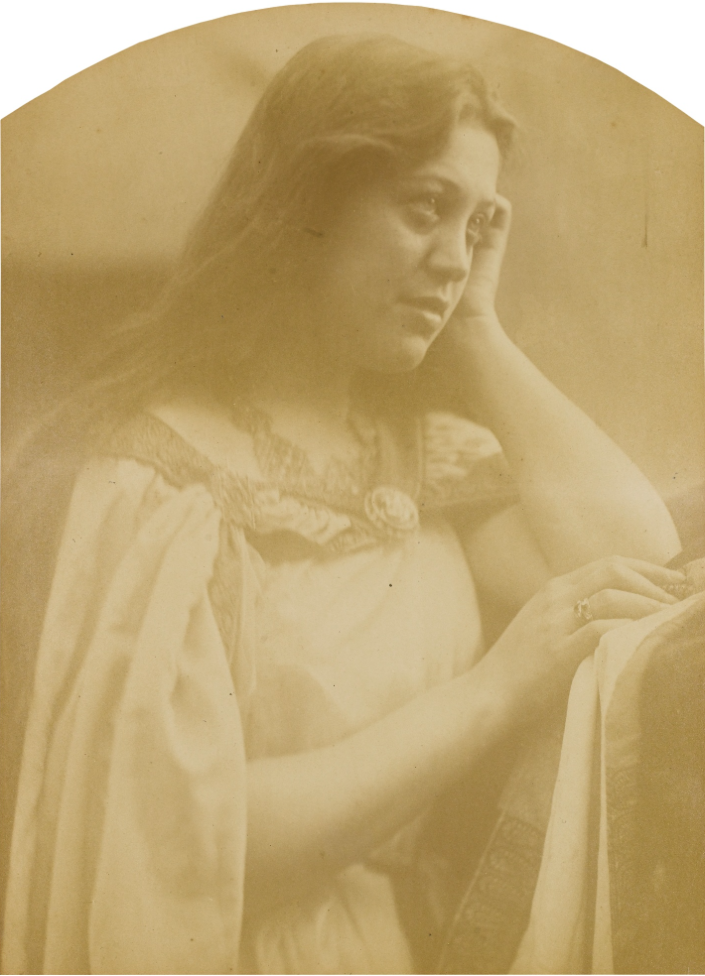 .
Hannah de Rothschild (later Countess of Rosebery), aged 20, by Julia Margaret Cameron, 1871
.
Hannah Primrose, Countess of Rosebery (27 July 1851 – 19 November 1890) was a British noblewoman, the daughter of Baron Mayer de Rothschild and the wife of Archibald, Earl of Rosebery. After inheriting her father’s fortune in 1874, she became the richest woman in Britain.
..
During the final quarter of the 19th century her husband, the Earl of Rosebery, was one of the most celebrated figures in Britain, an influential millionaire and politician, whose charm, wit, charisma and public popularity gave him such standing that he “almost eclipsed royalty.” Yet his Jewish wife, during her lifetime regarded as dull, overweight and lacking in beauty, remains an enigmatic figure largely ignored by historians and often regarded as notable only for financing her husband’s three ambitions: to marry an heiress, win the Epsom Derby, and become Prime Minister (the second and third of these possibly apocryphal ambitions were achieved after her death). In truth, she was her husband’s driving force and motivation.
.
Her marriage into the aristocracy, while controversial at the time, gave her the social cachet in an antisemitic society that her vast fortune could not. She subsequently became a political hostess and philanthropist. Her charitable work was principally in the sphere of public health and causes associated with the welfare of working-class Jewish women living in the poorer districts of London.
.
Having firmly assisted and supported her husband on his path to political greatness, she suddenly died in 1890, aged 39, leaving him, distraught and bereft of her support, to achieve the political destiny which she had plotted. His premiership of the United Kingdom was shambolic, and lasted barely a year. For over thirty years following her death, he wandered in a political wilderness, directionless and exceedingly eccentric, until his own death in 1929.
.
Hannah de Rothschild was born in 1851 into a world of great wealth and luxury. She was the granddaughter of Baron Nathan Mayer Rothschild, who had founded N M Rothschild & Sons, the English branch of the Rothschilds’ banking empire. Niall Ferguson states in his History of the House of Rothschild that by the mid-19th century the Rothschilds regarded themselves as the nearest thing the Jews of Europe had to a royal family, and the equals of royalty. Whether or not this was strictly true, the many Rothschild homes and their art collections, in England, Austria, France and Germany, certainly rivalled those of the crowned heads of Europe.
.
Hannah de Rothschild’s father Baron Meyer Amschel de Rothschild married his cousin Juliana Cohen in 1850. The marriage provided the impetus for Meyer to create what he described as “an enduring monument,” a country house of monumental proportions. His daughter Hannah, aged just six months, laid the foundation stone on 31 December 1851. Throughout her life, Mentmore Towers was to be a fixed and pivotal point.
.
Within a few years of the mansion’s completion, attracted by the good hunting and proximity to London, Hannah’s relatives began to build estates nearby, all within a carriage drive of each other; thus, Hannah grew up in an almost private world of unimaginable splendour and security. Pevsner has described this enclave of Rothschild properties as “the most conspicuous and significant aspect of Victorian architecture in Buckinghamshire.” In addition to Mentmore, Baron and Baroness Meyer de Rothschild had a large house in London, 107 Piccadilly; The Zenaide, a luxurious yacht moored in the South of France; and other smaller properties visited only seasonally and occasionally.
.

Hannah de Rothschild inherited the vast Rothschild mansion of Mentmore aged 23. The neo-Renaissance mansion is photographed here at about thetime of Lady Rosebery’s death in 1890.

.As an only child growing up in what were, in all but name, palaces, her childhood appears to have been quite lonely. She was a companion to her hypochondriac mother and, in later life, a hostess with her father during her mother’s long periods of indisposition. She was indulged by both parents and her formal education was neglected in favour of music and singing lessons, subjects in which she was accomplished. Her parents were very protective of her, attempting to ensure that she was never exposed to the risk of sickness or even the sight of poverty. As a result, she was never allowed to enter the cottages on the Rothschilds’ estates. A cousin, who seems to have disliked her, claims that Hannah was so sheltered that the phrase “the poor” was just a meaningless euphemism to her. This is likely to be an exaggeration, as from her teens onwards she used much of her fortune to improve the lot of the poor, in housing and education. Whatever the faults of her education, she possessed great confidence, impressing her Rothschild relations, who noted her poise and competence when she hosted a large house party at Mentmore for the Prince of Wales while only 17 years of age.
.
Mayer Amschel de Rothschild died in 1874, leaving his daughter not only Mentmore (with its priceless art collection), his London mansion, and innumerable investments, but also the sum of two million pounds sterlingin cash (equivalent to £167 million in present day terms). Thus, Hannah de Rothschild became the wealthiest woman in England.