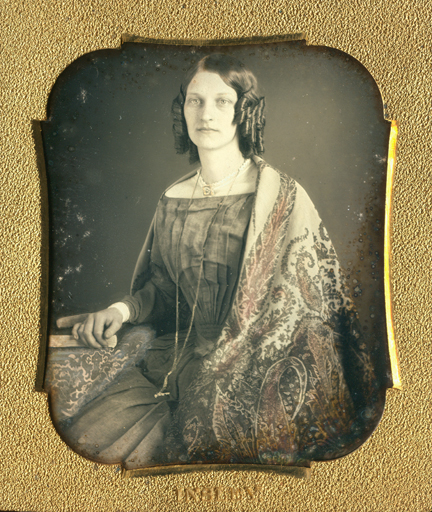 Henry Earle Insley, the eldest son of Daniel Insley of Nova Scotia was one of New York’s earliest daguerreians having reputedly been in business in 1840 with his brother-in-law George W. Prosch at 81 Liberty St from at least as early as July 28th. Insley had close familial ties with a number of other early New York daguerreotypists including William G. Babb and Nathaniel Crosby Jacquith/Jaquith..

Insley had married Sarah Babb in 1839. In April 1842 their second son Albert, who later joined his father in business, was born in Jersey City.  This suggests Henry was still living in Jersey City and working in New York at that time, however by November 1843 he had established himself in Montreal, Canada.  By mid-December this studio was taken over by a Mr. Horsley.  Insley then worked as a travelling photographer and he visited Ottawa for a few days in mid-March 1844 and Toronto in mid-June and then Brockville where he set up at Wilson’s Hotel in September.  Insley was back in Jersey City for the birth of his daughter Anna in January 1845.  Directory listings show Insley in business at 712 Broadway in 1845 and in 1845-1846 he was at 122 Broadway.  During 1846-1847 Insley was listed at both 155 and 122 Broadway and from 1847-1849 he was listed at 122 Broadway and 156 Fulton Street.  In 1849-1850 Insley was listed at 122 Broadway and 196 Fulton Street then from 1850-1856 he was at 311 Broadway.  Insley opened another studio with brother-in-law W. G. Babb at 177 Greenwich St which was listed from 1853-1854.  From 1856-1857 Insley was listed at 373 Broadway and he also established a studio closer to home at 47 Montgomery St, Jersey City over Millar’s store which ran until 1861.  No New York studio address was listed after 1857. Henry is listed as a farmer living in Clarkstown, Rockland County, New York in the 1870 and 1880 censuses.

Albert Babb Insley had taken up an interest in art under the tutorage of his uncle George F. Babb who was an architect and by the age of twelve he was already quite accomplished and by fourteen he was accepting painting commissions.  Albert left school at this age to join his father’s studio which by that time had moved away from daguerreotypes and into the newly emerging ambrotypes and later tintypes and paper prints.  Albert established himself as an extremely successful and influential painter of landscapes of the “Hudson Valley” school although he continued to work as a photographer.

Henry Insley became a Jersey City alderman in 1855 and he remained active in public life in that city.  He died at the ripe age of 83, the day after his birthday on 7 August 1894.  Insley’s career ran in an interesting parallel to noted daguerreian Jeremiah Gurney who was born the same year and who also commenced working in New York in 1840.  Gurney’s death was in the year after Insley’s.

Insley exhibited six half-plate daguerreotypes at the American Institute, Castle Garden, New York, in 1851.  Insley was awarded a patent on January 6, 1852 for “Illuminated Daguerreotypes”. According to the patent papers, Insley claimed his invention consisted of “producing an image of greater boldness and relief, at the same time casting a halo of various tints around the image, gradually blending in the dark or black outer edge.” Signing the application as witnesses were Lewis Wood and William G. Babb. Describing the process as used by C.C. Kelsey in Chicago, Humphrey’s Daguerreian Journal said “…around the upper part of the picture a halo is thrown, composed of the colors or rays of the spectrum, gradually merging into a rich dark border, giving a fine effect.”