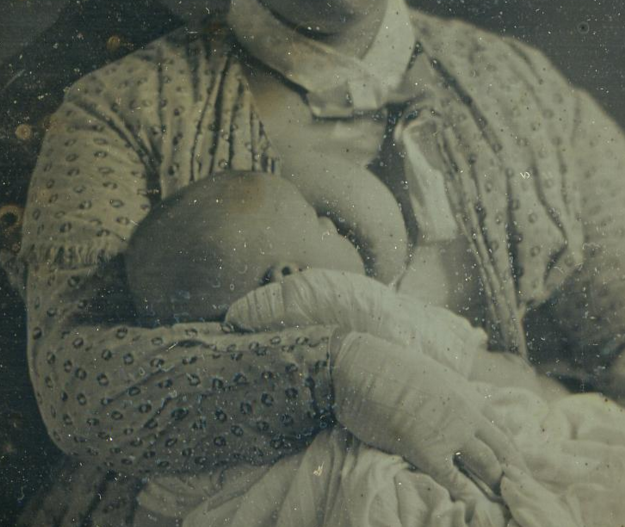 This is a most peculiar photo. First of all the explicit representation of breastfeeding. I wonder if the woman in the image was the child’s mother or her wet nurse. In those days many babies had wet nurses. If it were the biological mother, would a photographer (in those days almost all of them were male) be allowed to see the lady thus exposed? And for whose eyes was this image intended? For the husband, in his bedroom? For they would surely not display such an image in their parlor for all eyes to see. I am inclined to think the woman in the picture was a wet nurse, and the picture taken as a kind of memento. For example there is an image of a baby with it’s wet nurse, see the link to my other post here. Wet nurses were of lower class, and therefore I guess it was not so inappropriate to have a bared breast displayed on a photograph. The peculiar thing of the above photo is that the woman is wearing gloves! This is such a strange contrast with the bareness of her breast. Why would she have to cover her hands? Which again makes me think she was a wet nurse and not the biological mother. The photo is also a very nice example of the anatomy of an 1840s dress, how it opened in the front, and how the collar was separate from the dress. NB on the Flickr page of the Schlesinger library this image is dated 1860s, but this is absolutely not the case. The photo is from somewhere in the 1840s, beginning of the 1850s at the latest.