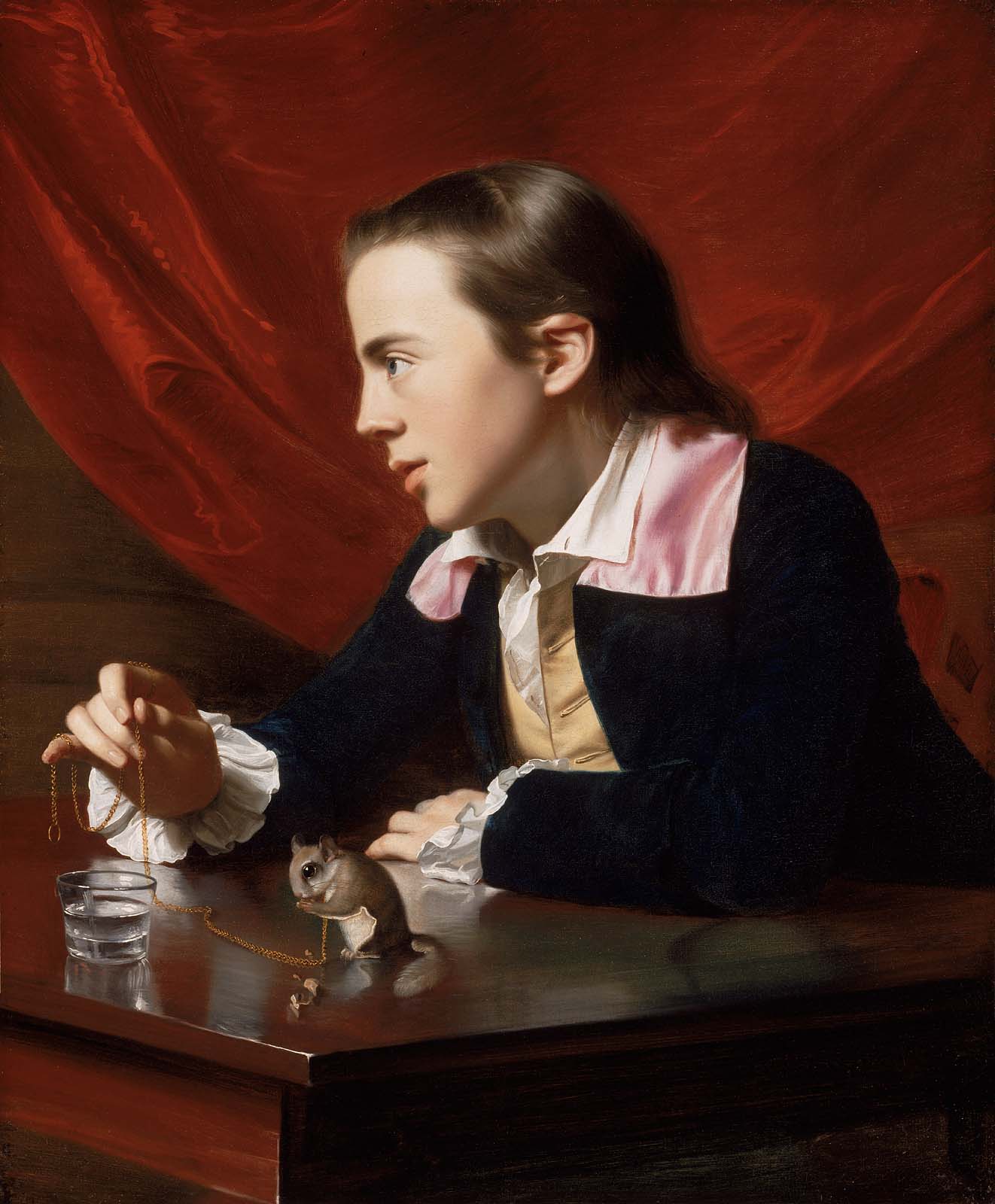 A Boy with a Flying Squirrel (Henry Pelham) by John Singleton Copley, 1765

Henry Pelham (February 14, 1748/49 – 1806), American painter, engraver, and cartographer, was born in Boston, where his father, Peter Pelham, limner, engraver, and schoolmaster, had married Mary (Singleton) Copley, widow of Richard Copley and mother of John Singleton Copley. His father died in 1751. A small tobacco shop run by his mother provided support for the family until Copley brought prosperity to them all through his portrait painting. Their home was in Lindall Street, at the present-day intersection of Exchange Place and Congress Street. From there Henry attended the Boston Latin School. He is assumed to have studied drawing and painting with his half-brother. It was a likeness of Henry Pelham, then aged fifteen or sixteen, that featured in The Boy with the Squirrel, a painting that was exhibited in London in 1766 and brought Copley his first fame abroad.

Henry Pelham’s many letters reveal a naïve, boyish young man, devoted to his mother and half-brother, an efficient assistant to the latter in practical affairs. He himself painted miniatures at this time, several of which are preserved. They reveal admirable workmanship.

Pelham created an engraving titled, The Fruits of Arbitrary Power, or The Bloody Massacre which depicted the incident on March 5, 1770. He lent a copy to Paul Revere, who copied it and produced his own engraving. Because Revere’s version was advertised for sale three weeks after the Massacre and a week before Pelham’s version went on sale, and because it didn’t credit him, Pelham felt that Revere had taken advantage of him.

A much more ardent Loyalist than Copley, he expressed himself vigorously against his neighbors, whom he held to be misguided and rebellious. In the winter of 1775, while making a journey on horseback to Philadelphia, a mob attacked him at Springfield, Massachusetts, as one of “a damn’d pack of Torys.” His sketch of the redoubts on Bunker Hill is reproduced with the Copley-Pelham letters. His Plan of Boston was engraved in aquatint in London in 1777. His illuminating letters shed important light on events of the American Revolution.

Pelham left Boston with other Loyalists in August 1776. Having arrived in London, where the Copleys were settled, he supported himself by teaching drawing, perspective, geography, and astronomy. In 1777 he contributed to the Royal Academy The Finding of Moses, which was engraved by W. Ward in 1787. The following year he exhibited some enamels and miniatures. Having married Catherine Butler, daughter of William Butler of Castle Crine, County Clare, Ireland, Pelham went to Ireland. His wife, however, died while bearing twin sons, Peter and William, and the father returned with them to London. He and Copley shared in the estate of their mother, who died in Boston on April 29, 1789. Soon after this Pelham was named agent for Lord Lansdowne‘s Irish estates, a work which he followed with energy and ability. He was a civil engineer and cartographer, and his county and baronial maps are important documents of Irish history. He was drowned from a boat while superintending the erection of a martello tower in the River Kenmare.

Via: Streets of Salem, Museum of Fine Arts Boston