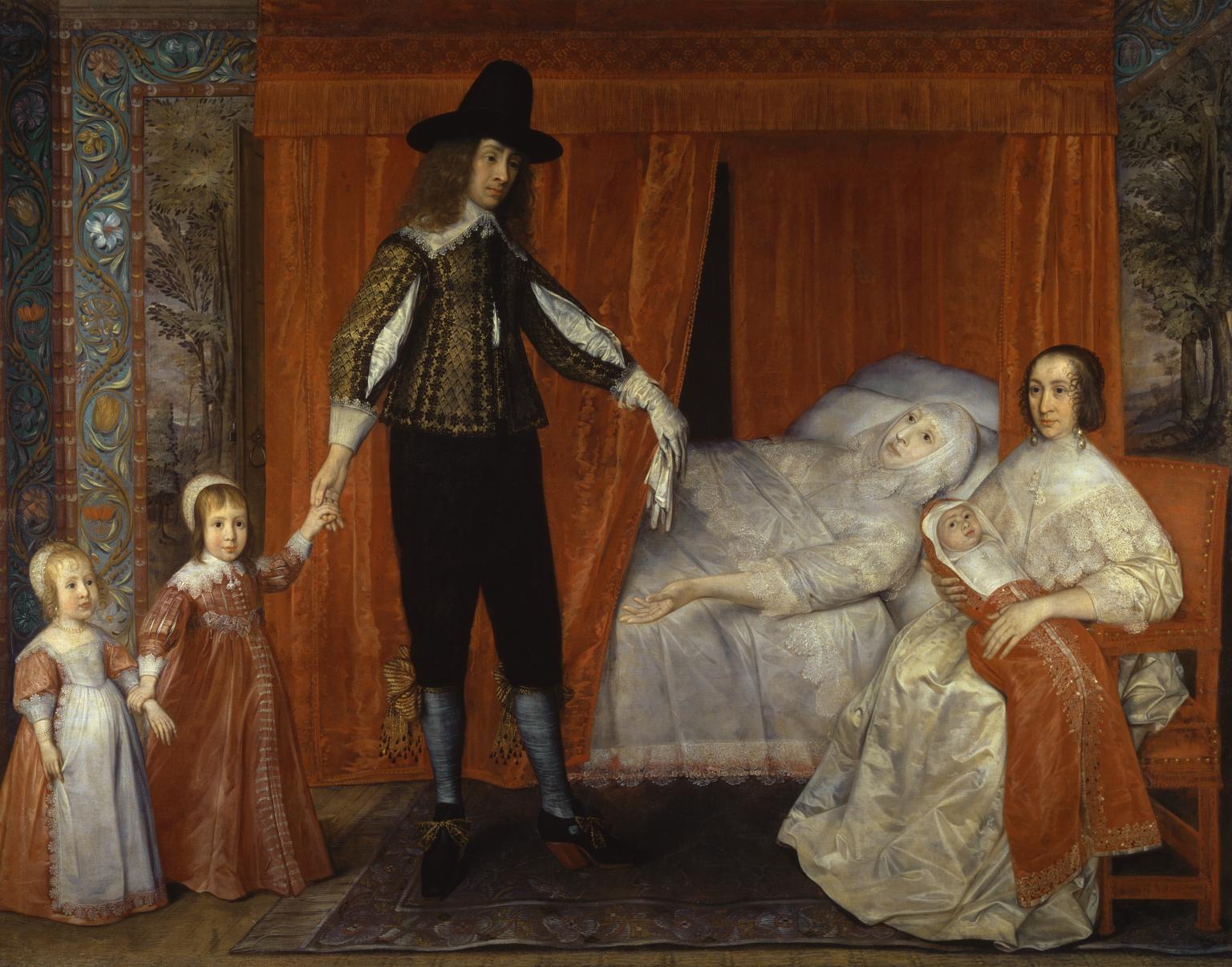 The painting was in the collection of the Earls of Guildford. It was among the items sold from Wroxton Abbey, Oxfordshire on 22-24 May 1933 (lot 718, as ‘Members of the Saltonstall Family’).

It has traditionally been attributed to David des Granges, who is otherwise known as a painter of portrait miniatures, although a handful of half-length paintings by him have also been noted. Des Granges came of an immigrant family from Guernsey and was baptised in 1611 at the French Church in London; as an adult he lived and worked in the Covent Garden area. He was employed as a miniaturist by Charles I (reigned 1625-49). During the English Civil War and subsequent Commonwealth period (1642-60) he took the royalist side and produced many miniatures of the future Charles II (reigned 1660-85).

The painting is thought to show Sir Richard Saltonstall (1595-1650) of Chipping Warden, near Banbury, Oxfordshire, with his family. Sir Richard was widowed in 1630, and the pallid figure within the bed may therefore be a posthumous image of his first wife, Elizabeth Basse. She here points towards the couple’s two surviving children, Richard and Ann, who link hands with each other and with their father, forming a chain both of affection and of family unity. As was customary at this period, the younger Richard wears a long skirt; boys only adopted breeches around the age of six or seven. In 1633 Sir Richard remarried, to a lady called Mary Parker, who may be the richly attired woman seated to the right. The swaddled child in her arms would be one of her own sons by Sir Richard – either John (born 1634, but died young) or Philip (born 1636).

The red hangings of the great bed are a sign of wealth and high status, but also give a celebratory rather than a sombre air to this grand dynastic image. To left and right of the bed can be seen the edges of a rich tapestry on the wall behind it – again a sign of wealth.

The intermingling here of the figures of the dead and the living echoes the conventions of sixteenth- and seventeenth-century funerary monuments, where a husband may be depicted in sculptural form lying alongside his first and second wives, all attended by the figures of both deceased and living children.