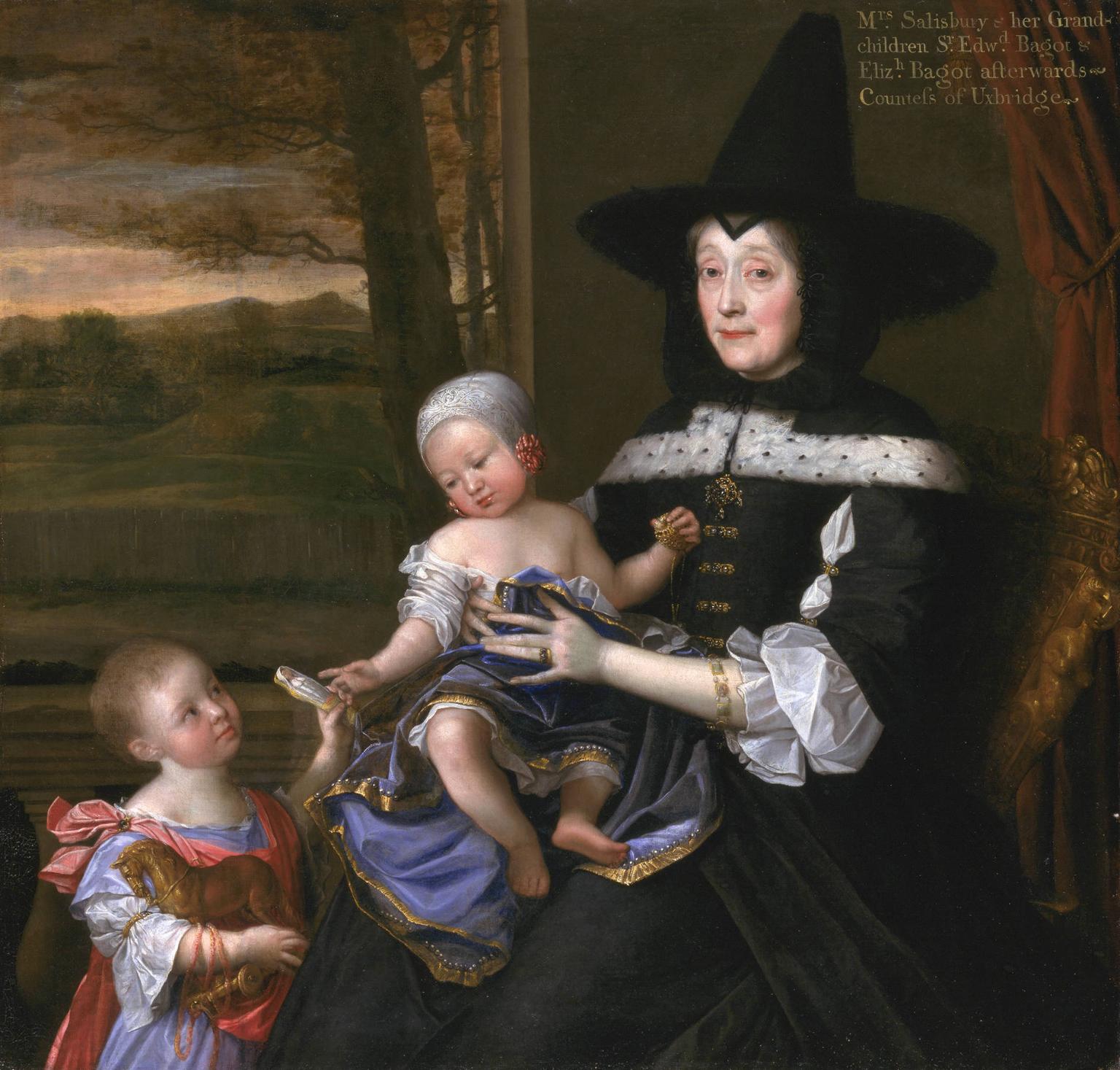 The painting may appear – and indeed is – a charming family group. Yet, when it was painted, it also served a further purpose. It was commissioned as a piece of visual evidence in a bitter dynastic row that centred on property – the very land that is depicted in it, beyond left.

It is the pivotal painting in a group of six family portraits commissioned in 1675 from John Michael Wright by a Staffordshire gentleman, Sir Walter Bagot (1644-1704) of Blithfield, near Rugeley. They comprised the present work showing his mother-in-law and his two younger children; a picture of himself in classical attire; a pendant pair of himself and his wife Jane, nee Salesbury (c.1650-95); a double portrait of his mother, Lady Mary Bagot with his other daughter Mary; and an image of his late father-in-law, Sir Charles Salesbury (died 1659) – the present sitter’s husband.

Much is known about the Bagot family‘s affairs – including the progress of Wright’s work on the paintings – because a large group of family documents survives in the National Library of Wales. Walter and Jane’s marriage in 1670 brought him her profitable Welsh estates, but triggered a bitter rift with part of the Salesbury family.

In 1675, when these pictures were commissioned, Wright was at the height of his success. He went up to Blithfield in summer 1675 and remained there until the autumn, residing with the family and making preliminary sketches of them, then returning to London for the winter and working on the paintings over the following year, 1676. The Tate portrait was the last in the group to be finished. On 24 October 1676, Wright wrote that it had been despatched to Blithfield, adding that ‘Madam Salisbury’s peece [sic] (being of 3 figures) I thought I would never have an end for I could not hinder my self from making it curious and full of variety as the subject required’ (National Library of Wales, Bachymbyd Letters, no.304). Investigation and conservation of this work at Tate revealed that he did indeed make various changes in the course of painting it.

Wright charged £40 for the Tate portrait, – it was by some way the costliest of the set. He made a separate charge for supplying the frames, the carrying cases and for the cost of sending the finished works to Blithfield. The present frame is probably the original one.

Given the legal case over the Salesbury estates that was then in progress, the peaks seen in the present picture must indicate Wales. Mrs Salesbury herself lived at Pool Park, near Ruthin, from where the Clwyd Hills would have been visible. Her attire is that of an affluent widow. Her pointed hat is of a type worn by affluent women throughout Britain at this date. Although Mrs Salesbury is in contemporary dress, little Edward wears imitation classical attire. This style links him with the heroes of Roman literature and history. The composition echoes the iconography found in images of the Madonna and Christ Child with the infant John the Baptist. This is not by chance, for Wright had previously spent fourteen years in Rome and had been accepted into the artists’ guild there (the only seventeenth century British artist to be accorded such recognition).

Mrs Salesbury’s year of birth is not known; having been widowed in 1659, she was to live on until 1693. Elizabeth herself, born in March 1675, did not marry until 1739, dying ten years later at the age of 75. Her husband, Henry Paget, Earl of Uxbridge, was a close political associate of her brother. Edward himself, like his father, married an heiress and represented Staffordshire as a Member of Parliament, but died comparatively young, at the age of 38.