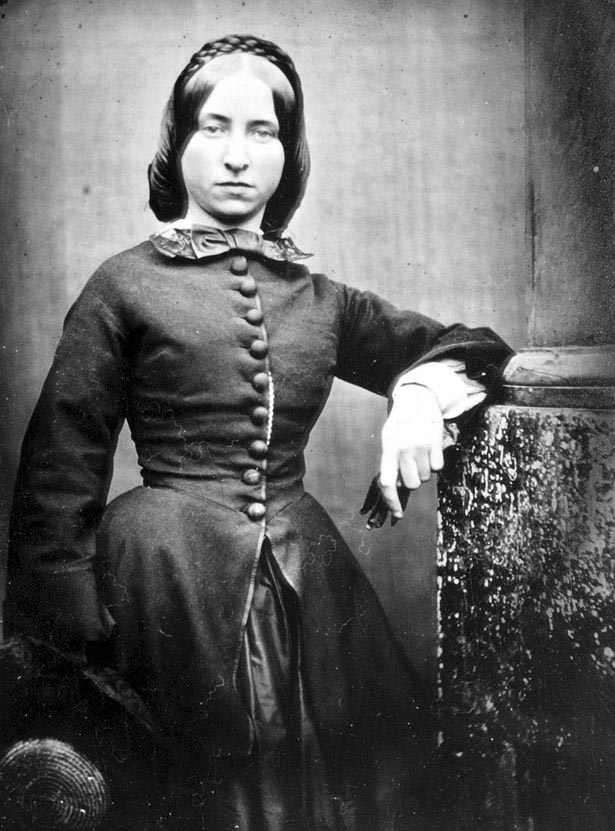 In 1857, a twenty-two-year-old woman stood trial in Glasgow for murdering her former lover. It was the cause célèbre of the day and artist Dante Gabriel Rossetti declared her too beautiful to be executed whether she was guilty or not, saying, “you wouldn’t hang a stunner!” (‘Letters of DG Rossetti’, Atlantic Monthly vol. 77) Rossetti used the term ‘stunner’ quite often, it was his preferred description of beauty. In this instance, he was describing socialite Madeleine Smith who may or may not have fed arsenic to Pierre Emile L’Angelier, the lover she had kept secret from her family.

Smith was the first child (of five total) of an upper-middle-class family in Glasgow; her father James Smith (1808–1863) was a wealthy architect, and her mother, Elizabeth, the daughter of leading neo-classical architect David Hamilton. The family lived at No 7, Blythswood Square, Glasgow, and also had a country property, “Rowaleyn”, near Helensburgh.

Smith broke the strict Victorian conventions of the time when, as a young woman in early 1855, she began a secret love affair with Pierre Emile L’Angelier, an apprentice nurseryman who originally came from the Channel Islands.

The two met late at night at Smith’s bedroom window and also engaged in voluminous correspondence. During one of their infrequent meetings alone, she lost her virginity to L’Angelier.

Smith’s parents, unaware of the affair with L’Angelier (whom Smith had promised to marry) found a suitable fiancé for her within the Glasgow upper-middle class – William Harper Minnoch.

Smith attempted to break her connection with L’Angelier and, in February 1857, asked him to return the letters she had written to him. Instead, L’Angelier threatened to use the letters to expose her and force her to marry him. She was soon observed in a druggist’s office, ordering arsenic, and signed in as M.H. Smith.

Early in the morning of 23 March 1857, L’Angelier died from arsenic poisoning. He is buried in the Ramshorn Cemetery on Ingram Street in Glasgow.

After his death, Madeleine Smith’s numerous letters were found in his lodging house, and she was arrested and charged with his murder.

At trial, Smith was defended by advocate John Inglis, Lord Glencorse. Toxilogical evidence, confirming that the victim had died of arsenic poisoning, was given by Andrew Douglas Maclagan.

Although the circumstantial evidence pointed towards her guilt (Smith had made purchases of arsenic in the weeks leading up to L’Angelier’s death, and had a clear motive) the jury returned a verdict of “not proven“, i.e. the jury was unconvinced that Smith was innocent, but the prosecution had produced insufficient evidence to the contrary.

Crucial to the case was the chronology of certain letters from Smith to l’Angelier, and as the letters themselves were undated, the case hinged to some extent on the envelopes. One letter in particular depended on the correct interpretation of the date of the postmark which was unfortunately illegible, and attracted some caustic comments from the judge; but the vast majority of these postmarks were quite clearly struck. It transpired that when the police searched L’Angelier’s room, many of Smith’s letters were found without their envelopes and were then hurriedly collected and stuck into whichever envelopes came to hand.

The notoriety of the alleged crime and trial were scandalous enough for Smith to leave Scotland.

On 4 July 1861 she married an artist named George Wardle, William Morris‘s business manager. They had one son (Thomas, born 1864) and one daughter (Mary, called “Kitten”, born 1863). For a time she became involved with the Fabian Society in London, and sometimes made the coffee at meetings. As she was known by her new married name not everyone knew who she was, but a few did.

After many years of marriage, she and her husband separated in 1889 and Madeleine moved to New York City. Around 1916, she married a second time to William A. Sheehy and this marriage lasted until his death in 1926.

She died in 1928 and was buried under the name of Lena Wardle Sheehy.

As in the case of Lizzie Borden, scholars and amateur criminologists have spent decades going over the minutiae of the case.

Most modern scholars believe that Smith committed the crime and the only thing that saved her from a guilty verdict and a death sentence was that no eyewitness could prove that Smith and l’Angellier had met in the weeks before his death.

After the trial, The Scotsman ran a small article stating that a witness had come forward claiming that a young male and female were seen outside Smith’s house on the night of l’Angellier’s death. However, the trial was already in progress, and the witness could not be questioned during it.

Smith’s story was the basis for several plays and the David Lean film Madeleine (1950). Jack House‘s book Square Mile of Murder (1961), which contains a section on Smith, formed the basis for a BBC television version in 1980. A television play based upon the case, Killer in Close-Up: The Trial Of Madeleine Smith, written by George F. Kerr, was also produced by Sydney television station ABN-2, broadcast on 13 August 1958.

The case was an inspiration for Wilkie Collins‘ novel The Law and the Lady (1875), though the only main similar features were the problem of the Scottish “Not Proven” verdict and arsenic poisoning as a means for murder.

In the early 1930s. MGM starred Joan Crawford, Nils Asther and Robert Montgomery in a film called “Letty Lynton“, which was based on a 1931 novel of the same title by Marie Adelaide Belloc Lowndes. This film followed very closely along Madeleine’s story. In the film version, however, Crawford’s character is never charged with murder, and, in a classic example of pre-code Hollywood, gets away with murder (though the murder is accidental). Unfortunately, Letty is only available as a bootleg (illegally) due to a copyright suit filed shortly after the film’s release in 1932. For those that have seen it, the parallels are very much obvious and it remains a highly sought after piece of history.

Other novels based on the case include The House in Queen Anne’s Square (1920) by William Darling Lyell, Lovers All Untrue (1970) by Norah Lofts, and Alas, for Her That Met Me! (1976) by Mary Ann Ashe (pseudonym of Christianna Brand).