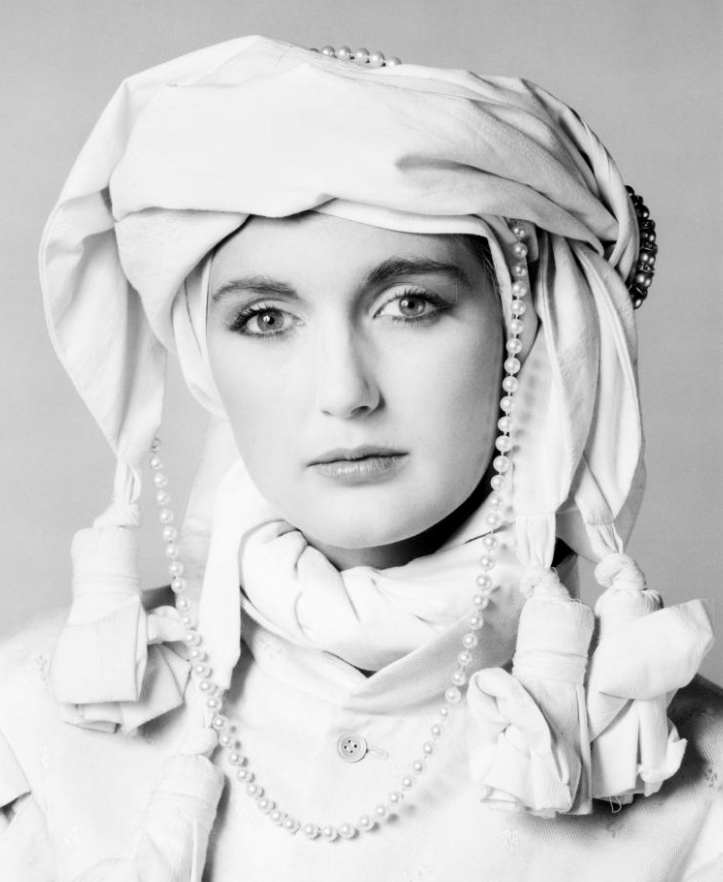 Francesca Thyssen is the daughter of the art collector, the late Baron Thyssen-Bornemisza, and the Scottish model, Fiona Campbell-Walter. In 1993 she married Archduke Karl von Habsburg, but they later separated. Francesca von Habsburg (as she is now called) lives in Vienna and, like her father, collects art on a grand scale. Mapplethorpe portrays her in a costume that makes her look like a woman in an early Netherlandish painting or a figure out of the Arabian Nights.

She was born Francesca Anne Dolores Freiin Thyssen-Bornemisza de Kászon et Impérfalva in Lausanne, the daughter of Baron Hans Heinrich Thyssen-Bornemisza and his third wife, fashion model Fiona Frances Elaine Campbell-Walter. She was educated at Le Rosey in Switzerland and at the age of eighteen attended Saint Martin’s School of Art but left after two years. After leaving the college she worked as an actress, singer and model. Her partying lifestyle in London in the 1980s earned her reputation as an It girl. For the ten years after she left Saint Martin’s college she lived in England, New York and Los Angeles before moving to Lugano to become curator for her father’s art collection.

During the war in Croatia Francesca visited the country to help protect Croatia’s heritage and artworks and to help restore churches and paintings damaged during the fighting.

Von Habsburg regularly participates in biennales by commissioning new works of contemporary art through a foundation called Thyssen-Bornemisza Art Contemporary which she founded in 2002 in Vienna Austria and has built up her own art collection with over four hundred pieces of contemporary video and digital art. Since 2012, TBA21 has a new exhibition space in Vienna’s second district, more precisely in a public park called Augarten. The exhibition space was therefore renamed Thyssen-Bornemisza Art Contemporary–Augarten. It exhibits works from the collection in thematic exhibitions twice a year. The Foundation also organises exhibitions of its collection world wide.

Von Habsburg has criticised her stepmother, Carmen Cervera, for the latter’s management of the Thyssen-Bornemisza Museum in Madrid after the sale of John Constable‘s painting, “The Lock“.

She appeared as Queen Marie-Henriette in the production Kronprinz Rudolf (2006), directed by Robert Dornhelm.