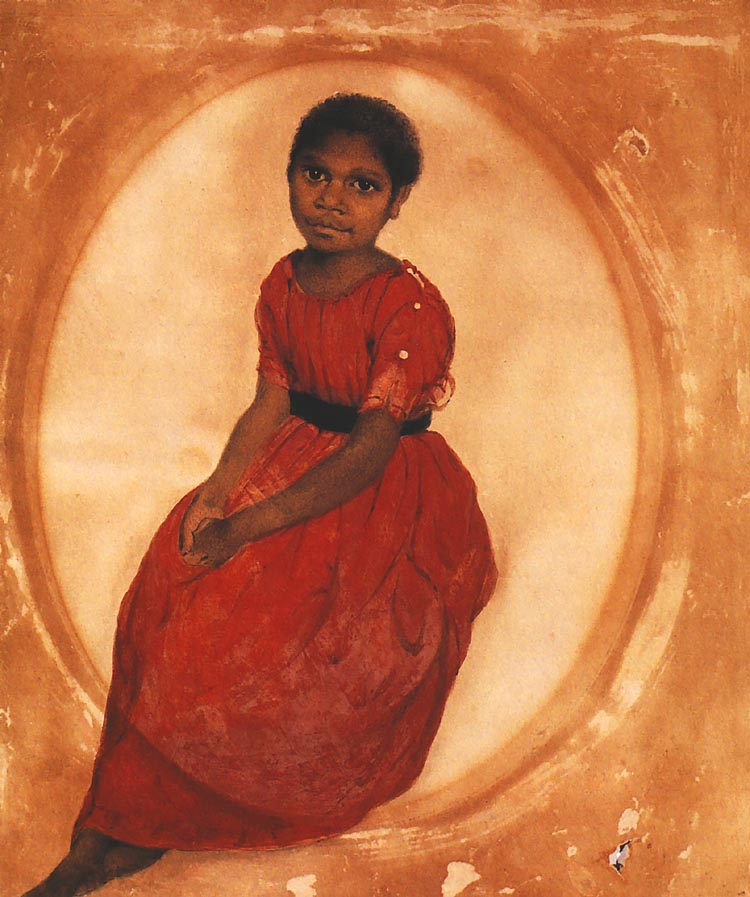 Mathinna (1835–1852) was an indigenous Australian girl, who was adopted and later abandoned by the Governor of Tasmania, Sir John Franklin.

Mathinna was born as Mary on Flinders Island, Tasmania to the Chief of the Lowreenne tribe, Towgerer, and his wife Wongerneep but the tribe was captured by Robinson, the Chief Protector of Aborigines, in 1833. Mary was renamed Mathinna when she was about six years old and adopted by Governor Sir John Franklin, an Arctic explorer, and his wife, Lady Jane Franklin; Mathinna was raised with Sir John’s daughter Eleanor.

Just one fragment of a letter written by Mathinna reveals what the transition from living with her family at Flinders Island to living at Government House must have been like: “I am good little girl, Ihave pen and ink cause I am a good little girl . . . . I have a got a red frock like my father. Come here to see my father. I have got sore feet and shoes and stockings and I am very glad.”

When Sir John Franklin was recalled to England (McGoogan, 212), they left Mathinna at Queen’s Orphan School in Hobart in 1843. Only eight years old, she found it difficult to adjust to her new surroundings. She was sent back to Flinders Island in 1844, at the age of nine, and then sent back to Queen’s Orphan School. In 1851, when she was about 16, she returned to the aboriginal settlement at Oyster Cove, west of Hobart (McGoogan, 213).

She drowned—according to one account—in a puddle while drunk on 1 September 1852. She was 17 or 18 years old.

Mathinna is believed to have been buried in the Oyster Cove Aboriginal cemetery, and is likely to have been among the remains exhumed by William Crowther in 1907 and taken to the University of Melbourne. After a campaign by the Tasmanian Aboriginal Centre, all remains from Oyster Cove were returned and cremated in a four-day ceremony in 1985.

The town of Mathinna is named after her, as is the mushroom Entoloma mathinnae.