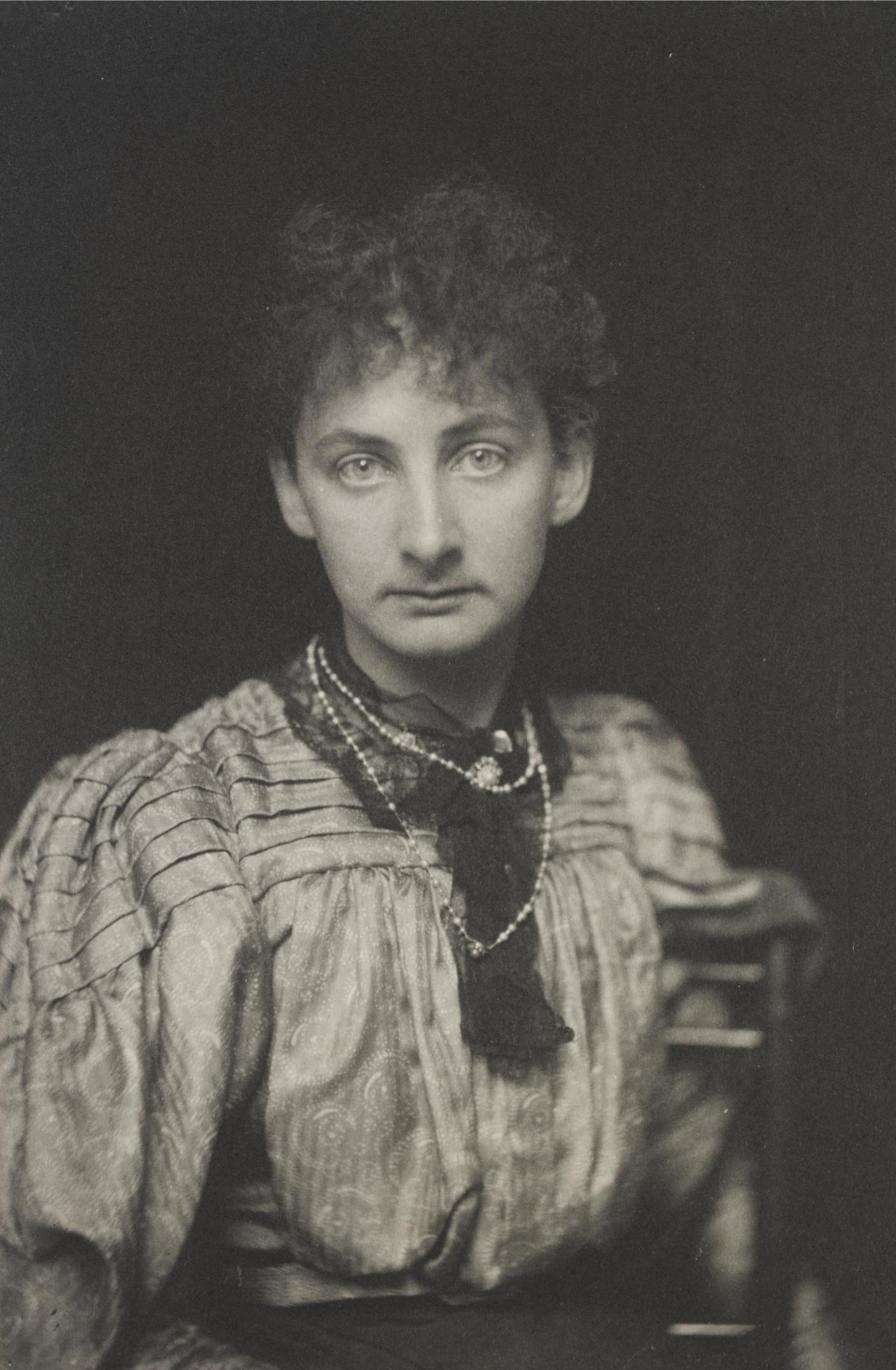 Although born and raised in the privileged ruling class of British society, Lytton rejected this background to join the Women’s Social and Political Union (WSPU), the most militant group of Suffragette activists, campaigning for “Votes for Women”.

She was subsequently imprisoned four times, including once in Walton gaol in Liverpool under the nom de guerre of Jane Warton, where she was force fed while on hunger strike. She chose the alias and disguise of Jane Warton, an ‘ugly London seamstress’, to avoid receiving special treatment and privileges because of her family connections: she was the daughter of a viceroy and the sister of a member of the House of Lords. She wrote pamphlets on women’s rights, articles in The Times newspaper, and a book on her experiences Prisons and Prisoners which was published in 1914.

While imprisoned in Holloway during March 1909, Lytton used a piece of broken enamel from a hairpin to carve the letter “V” into the flesh of her breast, placed exactly over the heart. “V” for Votes for Women.

Lytton remained unmarried, because her mother refused her permission to marry a man from a “lower social order”, while she refused to contemplate marrying anyone else.

Her heart attack, stroke, and early death at the age of 54 have been attributed in part to the trauma of her hunger strike and force feeding by the prison authorities.

Constance Lytton was the second daughter and third child of Robert Bulwer-Lytton, 1st Earl of Lytton and Edith Villiers (see my other posts here). Lytton was the Viceroy of India where his daughter spent the first eleven years of her life; it was he who made the proclamation that Queen Victoria was the Empress of India.

Constance Lytton’s paternal grandparents were the novelists Edward Bulwer-Lytton, 1st Baron Lytton and Rosina Doyle Wheeler. Edward Bulwer-Lytton, confidant of Mary Shelley, was a florid, popular writer of his day, coining such phrases as “the great unwashed”, “pursuit of the almighty dollar”, “the pen is mightier than the sword”, and the infamous incipit “It was a dark and stormy night“. Constance Lytton’s great-grandmother was the author and women’s rights campaigner Anna Wheeler.

In the early years in India Lytton was educated by a series of governesses and reportedly had a lonely childhood. Although she matured in England surrounded by many of the great artistic, political and literary names of the day, she tended to reject the aristocratic way of life, and after her father died she retired from view to care for her mother, rejecting attempts to interest her in the outside world.

Lytton remained unmarried until her death, having been refused permission in 1892 to marry a man from a “lower social order”. For several years she waited in vain for her mother to change her mind, whilst refusing to contemplate marrying anyone else.

The reclusive phase of Lytton’s life started to change in 1905 when she was left £1,000 in her great-aunt/godmother, Lady Bloomfield’s estate. She donated this to the revival of Morris dancing and her family records state that “Her brother Neville suggested that she gave it to the Esperance Club, a small singing and dancing group for working class girls”, where part of their remit was teaching Morris dancing. The Esperance club was founded by Emmeline Pethick-Lawrence and Mary Neal in response to distressing conditions for girls in the London dress trade.

Between September 1908 and October 1909 Constance Lytton’s conversion to the militant suffragette cause was complete.

Constance Lytton was imprisoned in Holloway prison twice during 1909, after demonstrating at the House of Commons, but her ill health (a weak heart) meant that she spent most of her sentence in the infirmary. When the authorities discovered her identity, the daughter of Lord Lytton, they ordered her release. The British government were also aware that her health problems and hunger striking could lead to martyrdom. Infuriated by such inequality of justice she wrote to the Liverpool Daily Post in October 1909 to complain about the favourable treatment she had received.

While she was imprisoned in Holloway Prison during March 1909 she started to mutilate her body. Her plan was to carve ‘Votes for Women’ from her breast to her cheek, so that it would always be visible. But after completing the “V” on her breast and ribs she requested sterile dressings to avoid blood poisoning, and her plan was aborted by the authorities.

Lytton wrote of the self-mutilation action in Prisons and Prisoners (Chapter VIII-“A Track to the Water’s Edge”):

I had decided to write the words “Votes for Women” on my body, scratching it in my skin with a needle, beginning over the heart and ending it on my face. I proposed to show the first half of the inscription to the doctors, telling them that as I knew how much appearances were respected by officials, I thought it well to warn them that the last letter and a full stop would come upon my cheek, and be still quite fresh and visible on the day of my release.

…(the blood)… The next morning before breakfast I set to work in real earnest and, using each of these [needle and broken hatpin] in turn, I succeeded in producing a very fine V just over my heart. This was the work of fully twenty minutes, and in my zeal I made a deeper impression than I had intended. The scratch bled to a certain extent. I had no wish for a blood-poisoning sequel, and, fearing the contact with the coarse prison clothes, when the wardress came to fetch me for breakfast I asked her for a small piece of lint and plaster.

I was taken down to the Senior Medical Officer….and the ward superintendent, who ushered me into his presence and exposed the scratched “V” for his inspection, were evidently much put out. I felt all a craftsman’s satisfaction in my job. The V was very clearly and evenly printed in spite of the varying material of its background, a rib bone forming an awkward bump. As I pointed out to the doctor, it had been placed exactly over the heart, and visibly recorded the pulsation of that organ as clearly as a watch hand, so that he no longer need be put to the trouble of the stethoscope.

In October 1909 Constance Lytton was arrested for a second time in Newcastle. She had thrown a stone wrapped in paper bearing the message ‘To Lloyd George – Rebellion against tyranny is obedience to God – Deeds, not words’. Her message was in response to the government’s new policy of force-feeding imprisoned suffragettes who were on hunger strike.

In January 1910, convinced that poorer prisoners were treated badly, Lytton travelled to Liverpool disguised as a working-class London seamstress named Jane Warton. She was arrested after an incident of rocks being thrown at an MP’s car, imprisoned in Walton gaol for 14 days ‘hard labour’ and force-fed 8 times. After her release, although desperately weak, she wrote accounts of her experience for The Times and Votes for Women (the monthly journal of the WSPU, launched in 1907). She went on to lecture on the subject of her experience of the conditions which suffragette prisoners endured. It’s thought that her speeches and letters helped to end the practice of force-feeding.

Lytton’s health continued to deteriorate and she suffered a heart attack in August 1910, and a series of strokes which paralysed the right side of her body. Undaunted, she used her left hand to write Prisons and Prisoners(1914), which became influential in prison reform.

In November 1911 Constance Lytton was imprisoned in Holloway for the fourth time, after breaking windows in the Houses of Parliament, or of a Post Office in Victoria Street, London. However, conditions had improved, “all was civility; it was unrecognisable from the first time I had been there” and suffragettes were treated as political prisoners.

After the WSPU ended its militant campaign at the outbreak of war in 1914, Lytton gave her support to Marie Stopes‘ campaign to establish birth control clinics.

In January 1918 parliament passed a bill giving women over 30 the vote if they were married to a property owner or were one themselves.

Constance Lytton never fully recovered from her prison treatment, heart attack and strokes, and was nursed at Knebworth by her mother. They lived at Homewood, a house designed by Constance’s brother-in-law, Edwin Lutyens. She died in 1923, aged 54, only days after moving out of Homewood to a flat in Paddington, London, in an attempt to restart an active life. She was buried with the purple, white and green Suffragette colours laid on her coffin. Her remains lie in the family mausoleum.