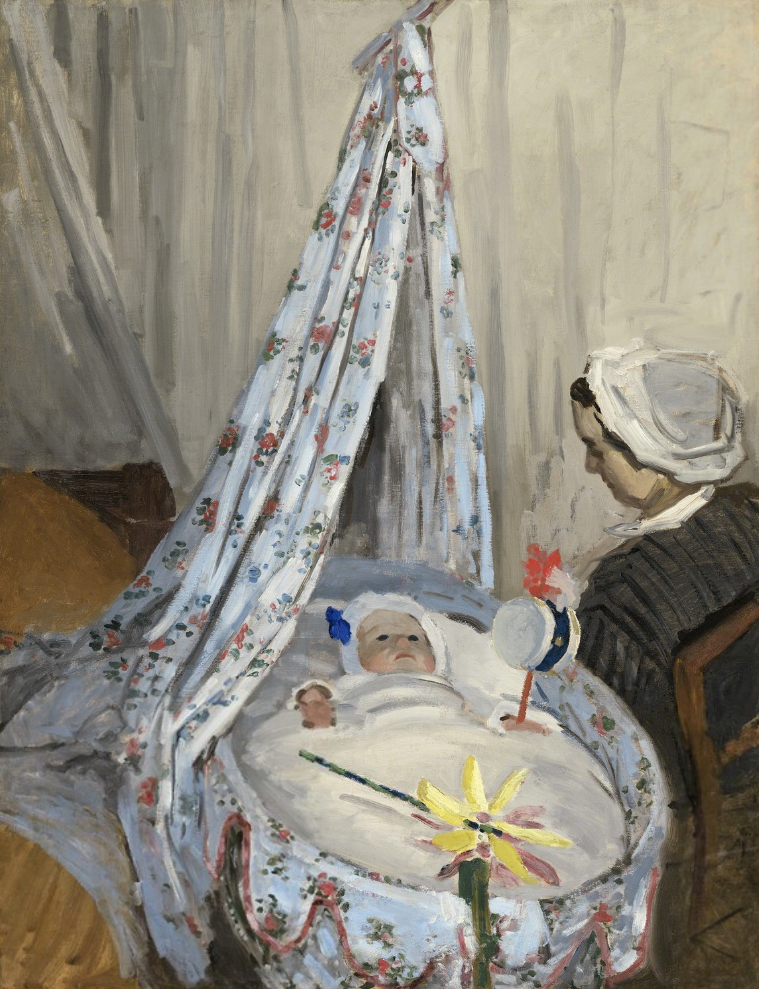 Camille Doncieux with the Artist’s Son Jean by Claude Monet, 1867

What seems like an idyllic image was in fact not so idyllic:

Camille-Léonie Doncieux was born in the town of La Guillotine (now part of Lyons, France) on 15 January 1847. Her father, Charles Claude Doncieux, was a merchant. He moved with his wife and daughter to Paris, near the Sorbonne, early in the Second French Empire (1852-1870). A few years after the birth of her sister, Geneviève-François in 1857, the family moved to Batignolles, now a part of the northwestern section of Paris. Batignolles was popular with artists.

While in her teens, Doncieux began work as a model. She met Monet, seven years her senior, in 1865 and became his model posing for numerous paintings. She was Monet’s mistress, living in poverty at the beginning of his career. His aunt and father did not approve of the relationship with Camille. During Camille’s pregnancy with their first son, Monet left her in Paris and stayed at his aunt’s country estate to protect the monthly cheque that he received from the family and give the appearance that he was no longer in a relationship with Camille. She was left behind in Paris without funds for her care.

In Paris on 8 August 1867, Camille Doncieux gave birth to Jean, her first son with Claude Monet. Claude, who had spent the summer in Sainte-Adresse visiting his father and aunt Sophie Lecadre, returned to Paris for the birth and stayed for several days afterwards before returning to Sainte-Adresse. He returned to Paris at the end of the year for the holidays and stayed in the cold one-room apartment that Camille shared with Jean. In 1868 Monet went to live with Camille and Jean in Paris, hiding the fact from his father and aunt who thought he abandoned “his mistress and child”. To escape his creditors and live in a less expensive place, in the spring the three moved to Gloton, a small scenic village near Bennecourt. They were thrown out of the inn they were staying in for non-payment. Camille and Jean were able to stay with someone in the country, while Monet tried to obtain monies for survival.

Camille and Monet were married on 28 June 1870 in the 8th arrondissement of Paris during a civil ceremony. Painter Gustave Courbet was a witness. Although Monet’s father was not present because he did not approve of his marriage, Camille’s parents attended the ceremony. Upon her marriage, Camille received a 1,200 franc dowry, which represented two years interest on a principal investment that she would receive upon her father’s death. Her parents stipulated that the dowry money should be kept in a separate account in Camille’s name. This was done to protect the money from Claude Monet’s creditors. The couple took their son Jean with them on their honeymoon to Trouville-sur-Mer and stayed at the Hotel Trivoli. Continuing to avoid creditors, Monet also sought to avoid being drafted to serve during the Franco-Prussian War. He left his bride and son to go to Le Havre, France to visit his ailing father and then on to England, “presumably” with money given to him by his father. Camille and Jean met up with him in England in October 1870.

They lived at Bath Place, now Kensington High Street, by early 1871. It was here that Monet made the only painting of Camille that he made in London. Entitled Repose, she sat in a chaise longue with a book on her lap.

Their second son, Michel was born on 17 March 1878, and Camille’s poor health was further degraded.