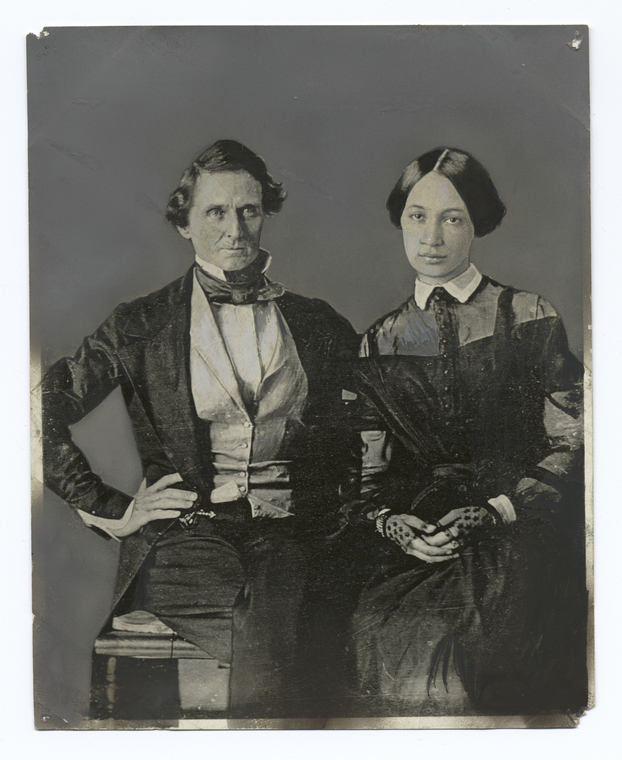 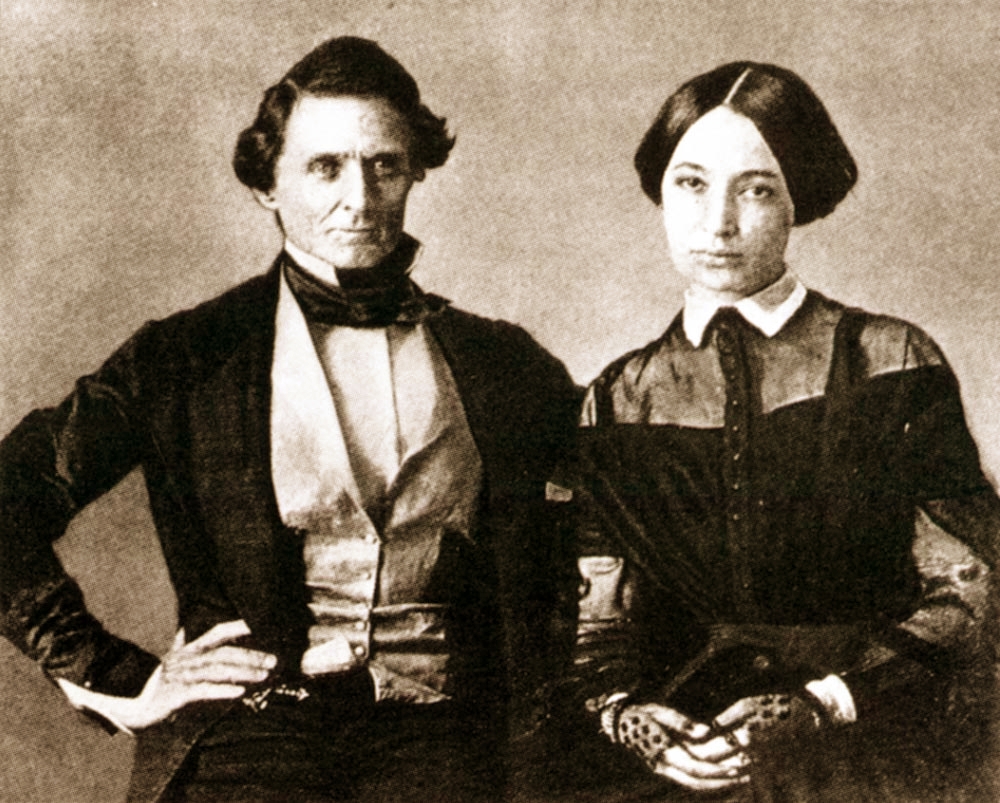 From a daguerreotype in the possession of their granddaughter, Mrs. George B. Webb, Colorado Springs, Colorado. On this image he was 37, she was 19.

Jefferson Davis was a 35-year-old widower when he and Varina met. His first wife, Sarah Knox Taylor, daughter of the future president Zachary Taylor, had died of malaria three months after their wedding in 1835. Davis had been reclusive in the ensuing eight years, although beginning to be active in politics. Shortly after first meeting him, Howell wrote to her mother:

“I do not know whether this Mr. Jefferson Davis is young or old. He looks both at times; but I believe he is old, for from what I hear he is only two years younger than you are [the rumor was correct]. He impresses me as a remarkable kind of man, but of uncertain temper, and has a way of taking for granted that everybody agrees with him when he expresses an opinion, which offends me; yet he is most agreeable and has a peculiarly sweet voice and a winning manner of asserting himself. The fact is, he is the kind of person I should expect to rescue one from a mad dog at any risk, but to insist upon a stoical indifference to the fright afterward.”

In keeping with custom, Davis sought the permission of Varina Howell’s parents before beginning a formal courtship. They initially disapproved of him due to the many differences in background, age, and politics. Davis was a Democrat and the Howells, including Varina, were Whigs. In her memoir, Varina Howell Davis later wrote that her mother was concerned about Davis’ excessive devotion to his relatives (particularly his older brother Joseph, who had largely raised him and upon whom he was financially dependent) and his near worship of his deceased first wife. The Howells ultimately consented to the courtship, and the couple became engaged soon after.

Initially their wedding was planned as a grand affair to be held at Hurricane during Christmas of 1844, but the wedding and engagement were cancelled shortly beforehand, for unknown reasons. In January 1845, while Howell was ill with a fever, Davis frequently visited her. They became engaged again. When they married on February 26, 1845 at her parents’ house, a few relatives and friends of the bride attended, and none of the groom’s family.

Their short honeymoon included a visit to Davis’ aged mother, Jane Davis, and a visit to the grave of his first wife in Louisiana. The newlyweds took up residence at Brierfield, a 1,000 acres (4.0 km2) plantation given by Joseph Davis to his much younger brother for his use some years before. It adjoined Hurricane Plantation. Their first residence was a two-room cottage on the property, and they started construction of a main house. It became a source of contention.

Soon after their marriage, Davis’ widowed and penniless sister, Amanda Davis Bradford, came to live on the Brierfield property along with her seven youngest children. Her brothers decided that she should share the large house which the Davises were building, but they had not consulted Varina Davis. It was an example of what she would later call interference from the Davis family in her life with her husband. Her brother-in-law Joseph Davis proved controlling, not only of his brother, who was 20 years younger, but of the even younger Varina during her husband’s absences. At the same time, her parents became more financially dependent on the Davises, to her embarrassment and resentment. Her youngest brother, born after her own marriage, was named Jefferson Davis Howell in her husband’s honor.

The couple had long periods of separation from early in their marriage, first as Jefferson Davis gave campaign speeches and “politicked” (or campaigned) for himself and for other Democratic candidates in the elections of 1846. He was also gone for extended periods during the Mexican War (1846-1848). Varina Davis was put under the guardianship of Joseph Davis, whom she had come to dislike intensely. Her correspondence with her husband during this time demonstrated her growing discontent, with which Jefferson was not particularly sympathetic.