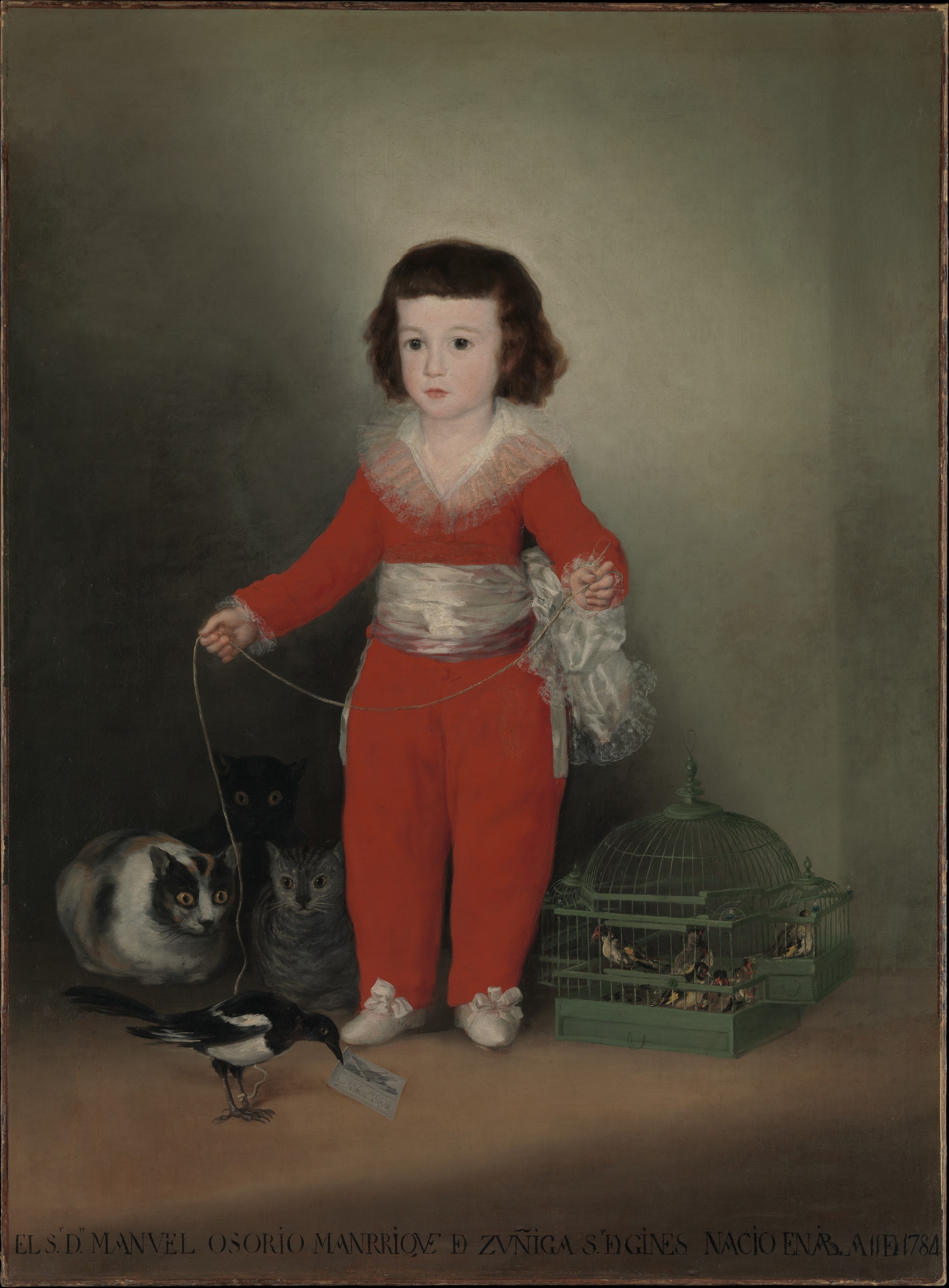 The sitter is the son of the Count and Countess of Altamira, born on April 11, 1784. Outfitted in a splendid red costume, he is shown playing with a pet magpie (which holds the painter’s calling card in its beak), a cage full of finches, and three wide-eyed cats. In Christian art birds frequently symbolize the soul, and in Baroque art caged birds are symbolic of innocence. Goya may have intended this portrait as an illustration of the frail boundaries that separate the child’s world from the forces of evil or as a commentary on the fleeting nature of innocence and youth.

Goya’s portrait of Manuel Osorio Manrique de Zuñiga was already described in 1923 (Mayer) as “perhaps the best” of the artist’s portraits of children from the 1780s. Less than fifty years later, the painting had assumed iconic status and was considered “one of the most appealing and successful portraits of children ever painted, and also one of the most famous” (Virch 1967). This was in part due to Duveen’s sale of the highly publicized canvas in 1927 to Jules Bache, who had decided to acquire the portrait following the suggestion of his daughter Mrs. Gilbert Miller (Behrman 1952). A copy of the painting had also been included as part of the stage set in Henri Bernstein’s play La Galerie des Glaces which opened at the Théâtre du Gymnase, Paris, in October 1924. Bernstein had owned the portrait himself, from at least 1903 to 1925. For the celebrity of the painting in the twentieth century, see Reva Wolf, “Goya’s ‘Red Boy’. The Making of a Celebrity,” in Sarah Schroth, ed., Art in Spain and the Hispanic World: Essays in Honor of Jonathan Brown, London, 2010.

On January 29, 1787 Goya was paid for a series of portraits for the Banco de San Carlos (current Banco de España), including a full-length one of the governor of the bank, Vicente Joaquín Osorio Moscoso y Guzmán, 12th Conde de Altamira (1756–1816) (Banco de España, Madrid). The success of this portrait prompted the count to commission other portraits of members of his family by Goya. These included images of his wife, María Ignacia Álvarez de Toledo Condesa de Altamira with her daughter María Agustina (MMA 1975.1.148), and of his two sons, Vicente Osorio de Moscoso, Conde de Trastamara (1777–1837; private collection) and Manuel Osorio Manrique de Zuñiga señor of Ginés. As stated in the inscription at the bottom of the painting, Manuel was born on April 11, 1784; he died at the age of eight on June 12, 1792 (for a biography of the members of the Altamira family, see Moffitt 1987). It is likely that all four Altamira portraits were painted between 1786 and 1788, and this is supported by the age of the sitters in each painting. It has been suggested that the portrait of Manuel may be posthumous and painted after 1792, but this seems unlikely, and a dating around 1787–88 would fit for a three or four-year-old boy. The portraits of Vicente and Manuel were accompanied by a third one of their middle brother, Juan María Osorio (1780–1785; Cleveland Museum of Art). The portrait, acquired by the Cleveland Museum as a Goya, and subsequently attributed to Augustín Esteve, is by an unknown artist but, as the inscription at its bottom proves, was a posthumous one painted after 1785. It is unclear if the anonymous painter who portrayed Juan María based his image on Goya’s one of Manuel, or if he established the prototype for the portraits of the two other brothers.

In this portrait Manuel wears a red outfit, which has given the painting the nickname the “Boy in Red”. He is accompanied by several pets. Attached to a string is a magpie that holds Goya’s calling card in its beak. To the right is a cage full of finches and to the left three cats. Manuel’s pets have been interpreted in several different ways. The caged birds are usually symbols of the soul and of innocence; the cats can be seen as forces of evil; for Virch (1967), “all motion is suspended, but one can easily imagine all hell breaking loose in the next instant, when those monstrously intent cats, foreboding evil, jump at the magpie and tear apart the fragile birdcage, creating disorder and early sorrow. . . By introducing the dark forces of evil Goya gave poignancy to his portrayal of innocent youth.” According to Chan (1980) the birdcage is a symbol of the confinement and protection of childhood, while the cats represent Fortune, Time, and Fate, and the magpie Destiny. The animals have also been seen as related to the iconography of Christ and his Passion (Pressly 1992) and to the educational views of the Enlightenment (Mena Marqués 2004). In general the animals fit within a larger visual tradition of children’s portraiture in Spain (Velázquez) and in England (Reynolds and Hogarth).