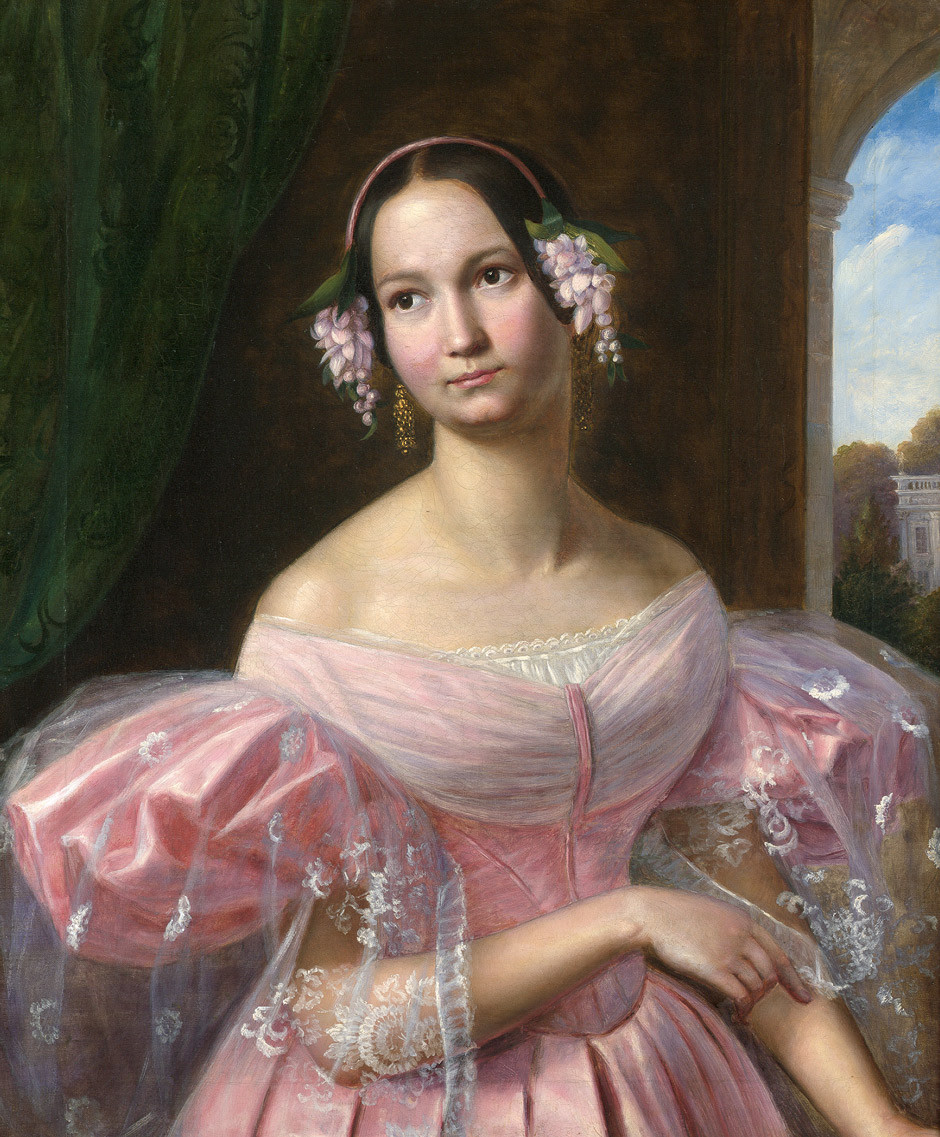 Helene Princess of Mecklenburg-Schwerin as a bride by Gaston Camillo Lenthe, 1837

Helene of Mecklenburg-Schwerin (Helene Luise Elisabeth; 24 January 1814 – 17 May 1858) was a French Crown Princess after her marriage in 1837 to the eldest son of Louis Philippe I, Ferdinand Philippe of Orléans.

On 30 May 1837 Helene Luise married Ferdinand Philippe d’Orléans at the Palace of Fontainebleau. The Archbishop of Paris, Hyacinthe-Louis de Quélen had used the pretext of religious differences to forbid it taking place in Notre Dame de Paris. She was chosen as the bride for the Duke to form of alliance with her uncle Frederick William III of Prussia, despite the fact that she was a Protestant, and that she was considered to be a liberal, and not considered a beauty: described as an ambitious person, she accepted the proposal against the will of her family because she wanted to become a queen.

Her husband was the eldest son of king Louis Philippe I and his Italian consort, Queen Maria Amalia. For the Duke of Orléans, it was a convenient alliance but one without much attraction – Metternich quipped she was “Petite but of a good house”

The marriage was described as happy, and it was mostly the queen who opposed her as a Protestant and a liberal. She became popular with the public by her introduction of the German Christmas tree in France. The couple had two children in quick succession. Their eldest Philippe, born at the Palais des Tuileries in Paris, would later be hailed as Louis Philippe II by Royalists. Their other son, Robert, fought for the Union in the American Civil War, and then for France in the 1870 Franco-Prussian War.

On 13 July 1842, her husband died from injuries sustained after jumping from an out of control carriage, his untimely death sparked a debate within the House of Orléans over the establishment of a regency council which would be necessary should Louis Philippe I die while his heir was still in infancy. The main contenders were Ferdinand Philippe’s widow and his brother Louis, Duke of Nemours, but further developments meant that the regency did not in the end materialise. In 1848, her father-in-law was deposed. Helene planned to prevent the abolition of the monarchy and be proclaimed as regent for her young son. Louis, Duke of Nemours, resigned his right to act as regent for her son to Helene and Helene appeared at the French parliament with her two sons; the count of Paris and her younger son the Duke of Chartres, to claim her son’s right to the throne and to be installed as his regent during his minority. This claim, however, was not accepted by the parliament. After failing to seize power, she left France for Germany with her children. Helene continued to actively claim the rights of her son to be the monarch of France from abroad, but the French royalists at home began to favour the other formerly reigning French royal line under the headship of the Count of Chambord instead.

Hélène died of a flu in Richmond; she passed the illness onto her son Robert who was staying with her at the time but he survived and continued to fight in the Wars of Italian Unification.