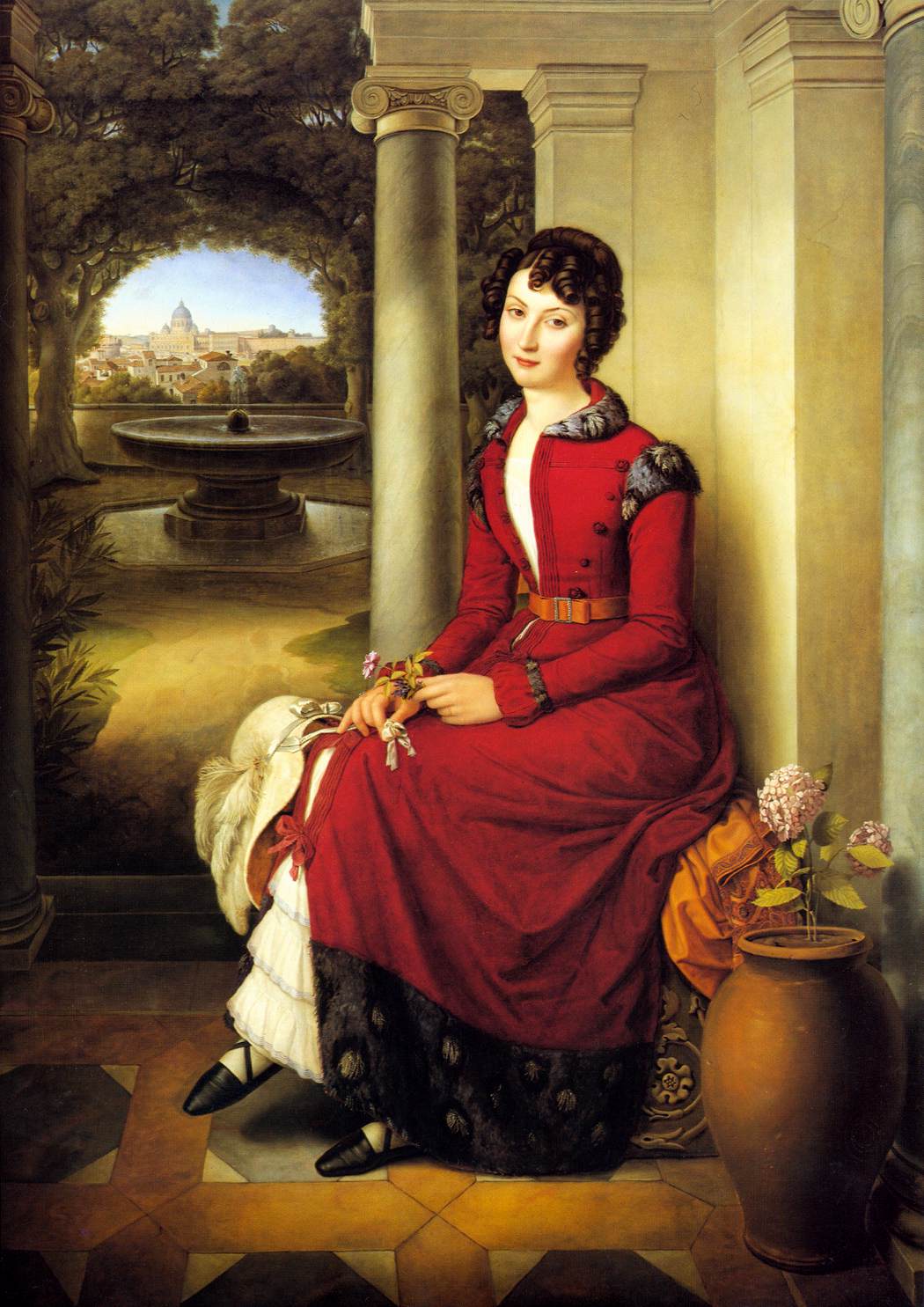 A type of portrait that the Nazarenes were highly successful with was the fanciful female portrait, in which the medieval dream is that of the courtly Romance. Hess’s depiction of the Marchesa Florenzi, mistress to the king of Bavaria, is a prime example of this.

The nearly life-size portrait of the Marquise shows her sitting in a garden. She’s turning slightly to the right, her legs crossed and her hands, holding a few flowers, are resting in her lap. Her head, slightly tilted back, and her lively, direct glance suggest self-confidence rather than arrogance. She is surrounded by the architecture of the loggia, which also serves as a frame. The ionic columns, which were primarily used in ancient temples devoted to goddesses, are here used as a mark of distinction to further define the importance of the sitter. In the background is a fountain, and behind that, cleverly revealed through carefully trimmed hedges, a view of St. Peter’s.

Several of the attributive elements surrounding the Marquise, for example the vase with a flowering plant, are reminiscent of medieval material symbolism, which the Nazarenes sought to revive. They, too, express the high regard that Ludwig held for the Marquise.

Marianna Marchesa Florenzi (1802 – 15 April 1870, Florence), née Marianna Bacinetti, was an Italian noblewoman and translator of philosophical works. She was also known by her married name of Marianna Florenzi Waddington.

A daughter of count Bacinetti of Ravenna, she had a literary education and devoted herself to reading philosophical works, becoming the female ideal of an educated woman of the time and a witty hostess of cultural gatherings and salons. She was one of the first female students, studying natural sciences at the University of Perugia in the first half of the 19th century.

She translated Leibniz’s Monadology into Italian and also promoted the spread of works by Kant, Spinoza and Schelling in Italian. Politically she supported Italy’s national-movement and in 1850 published Some reflections on socialism and communism, which (like many of her other works) ended up on the church’s Index Librorum Prohibitorum. She was for forty years a lover and close friend of Ludwig I of Bavaria, whom she visited more than thirty times. He always sought her advice, even in government matters, and 3,000 of her letters to him (along with 1,500 of his replies) survive.