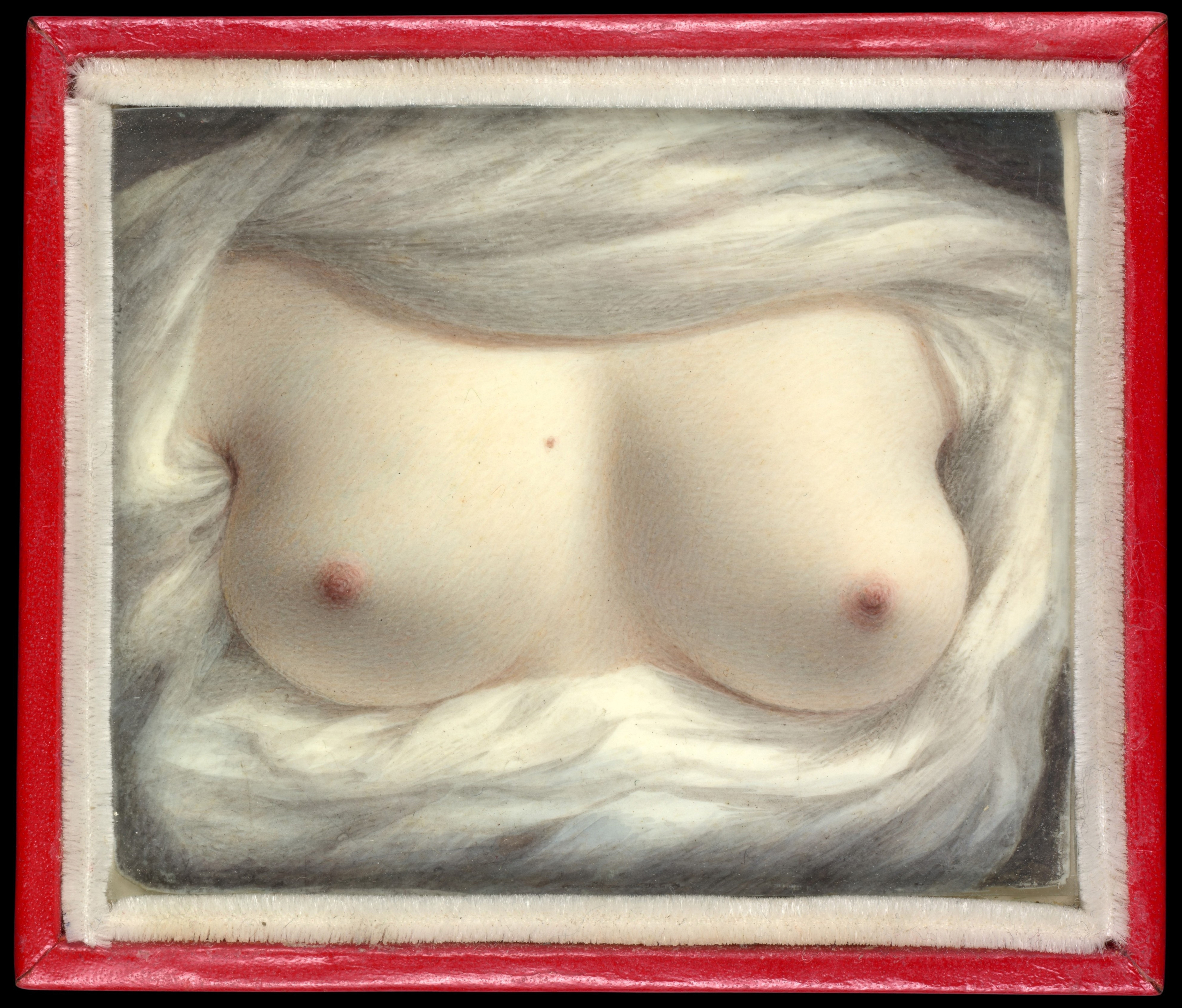 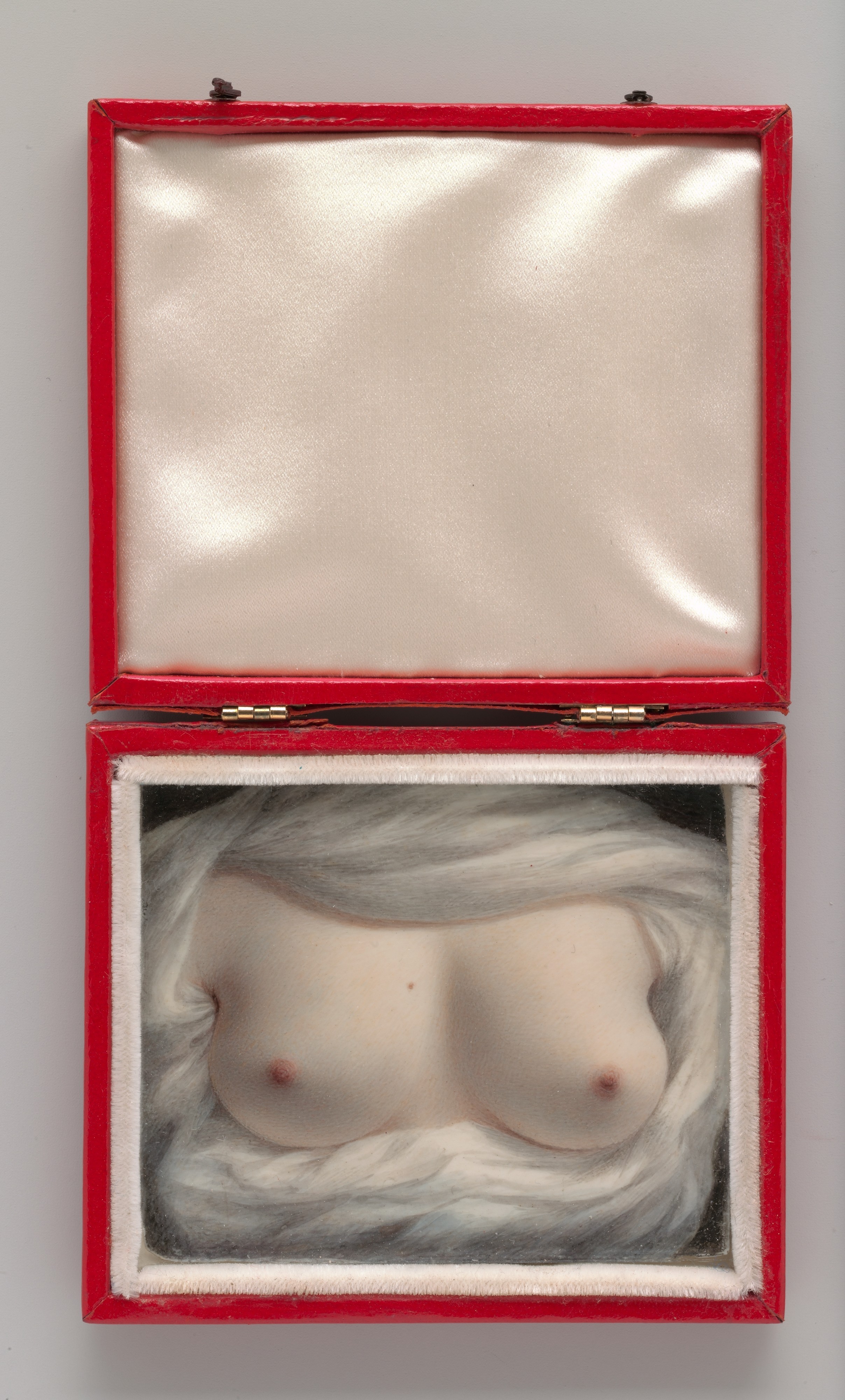 Beauty Revealed – given as a gift to a man who was not her husband –  is an 1828 self-portrait by Sarah Goodridge, painted in miniature with watercolors on a piece of ivory. Depicting the artist’s bared breasts surrounded by pale cloth, the 6.7-by-8-centimetre painting – originally on a paper backing – is set in a modern case. Goodridge, aged forty when she completed the miniature, depicts breasts which appear imbued with a “balance, paleness, and buoyancy” by the harmony of light, color, and balance. The surrounding cloth draws the viewer to focus on them, leading to the body being “erased”.

Goodridge gifted the portrait to statesman Daniel Webster, who was a frequent subject and possibly a lover, following the death of his wife; she may have intended to provoke him into marrying her. Although Webster married someone else, his family held onto the portrait until the 1980s, when it was auctioned at Christie’s and acquired by Gloria and Richard Manney in 1981. The couple gifted/sold their collection of miniatures, including Beauty Revealed, to the Metropolitan Museum of Art in 2006.

Beauty Revealed is a self-portrait depicting the artists’ bared breasts, pink nipples, and a beauty mark. These are presented in a gradation of color, giving a three-dimensional effect. Although Goodridge was aged forty when she painted this miniature, according to art critic Chris Packard her breasts seem younger, with a “balance, paleness, and buoyancy” which is imbued in part by the harmony of light, color, and balance. The breasts are framed by a swirl of pale cloth, which in parts reflects the light.

The 6.7-by-8-centimetre (2.6 by 3.1 in) painting is set in a case; it had originally been installed on a paper backing which had the date “1828” on the reverse. The work is a watercolor painting on ivory, thin enough for light to shine through and thus allow the depicted breasts to “glow”. This medium was common for American miniatures, but in this case also served as a simile for the flesh presented upon it.

Beauty Revealed was completed during a period of popularity of portrait miniatures, a medium which had been introduced in the United States in the late 18th century. By the time Goodridge completed her self-portrait, miniatures were increasing in complexity and vibrance. The Heilbrunn Timeline of Art History describes Beauty Revealed as a play on the eye miniatures which were then popular as tokens of affection in England and France, but not common in the US.Such miniatures allowed portraits of loved ones to be carried by their suitors without revealing the sitters’ identities.

Goodridge was a prolific Boston-based portrait miniature painter who had studied under Gilbert Stuart and Elkanah Tisdale. She had a long-term association with Daniel Webster, a politician who began services as Senator from Massachusetts in 1827. Webster sent her more than forty letters between 1827 and 1851, and in time, his greetings to her became increasingly familiar; his last letters were addressed to “My dear, good friend”, which was out of character. She, meanwhile, painted him more than a dozen times, and left her hometown of Boston to visit him in Washington, D.C. at least twice, once in 1828 after his first wife’s death and again in 1841–42, when Webster was separated from his second wife.

Goodridge completed Beauty Revealed in 1828, likely from looking at herself in a mirror. Several works have been cited as possible inspirations, including John Vanderlyn‘s Ariadne Asleep on the Island of Naxos and Horatio Greenough‘s sculpture Venus Victrix. Goodridge sent her portrait to Webster when he was a new widower, and, based on its miniature format, it was likely intended for his eyes alone. The American art critic John Updike suggests that the artist intended it to offer herself to Webster; he writes that the bared breasts appear to say “We are yours for the taking, in all our ivory loveliness, with our tenderly stippled nipples”. Ultimately, however, Webster married another, wealthier woman.

After Webster’s death, Beauty Revealed continued to be handed down by his family, together with another self-portrait Goodridge had sent him. The politician’s descendants held that Goodridge and Webster had been engaged. The painting was eventually auctioned through Christie’s, with a list price of $15,000, and passed through Alexander Gallery of New York later that year before being purchased by New York-based collectors Gloria Manney and her husband Richard. The couple included Beauty Revealed in the exhibition “Tokens of Affection: The Portrait Miniature in America” in 1991, which toured to the Metropolitan Museum of Art in New York, the National Museum of American Art in Washington, D.C., and the Art Institute of Chicago.

Beauty Revealed was one of more than three hundred portrait miniatures compiled by the couple, who gave it to the Met in 2006, as part of a gift/purchase arrangement of their collection. Carrie Rebora Barratt and Lori Zabar of the Met describe Goodridge’s self-portrait as the most compelling of the “strange and wonderful” miniatures by minor artists in the collection. Two years later, Beauty Revealed was included in a retrospective, “The Philippe de Montebello Years: Curators Celebrate Three Decades of Acquisitions”, which showcased works acquired under the tenure of retiring Met director Philippe de Montebello. Holland Cotter of The New York Times highlighted Goodridge’s self-portrait, describing it as “remarkable”. In 2009, authors Jane Kamensky and Jill Lepore drew inspiration from Beauty Revealed (as well as other paintings, such as John Singleton Copley‘s Boy with a Squirrel) for their novel Blindspot. As of 2014, the Met’s website lists Beauty Revealed as not on display.

Packard wrote that Beauty Revealed served as a sort of visual synecdoche, representing the entirety of Goodridge through her breasts. As opposed to the “burdened” 1845 self-portrait and the non-eroticized one of 1830, he found Beauty Revealed to forefront Goodridge and her demand for attention. Arguing that the clothing surrounding her breasts served to indicate a performance (similar to the curtains of vaudeville), Packard described the viewer’s eyes being focused on the breasts, while the rest of Goodridge’s body was erased and abstracted. This, he stated, challenged the assumptions and stereotypes regarding the demure, homebound 19th-century woman. 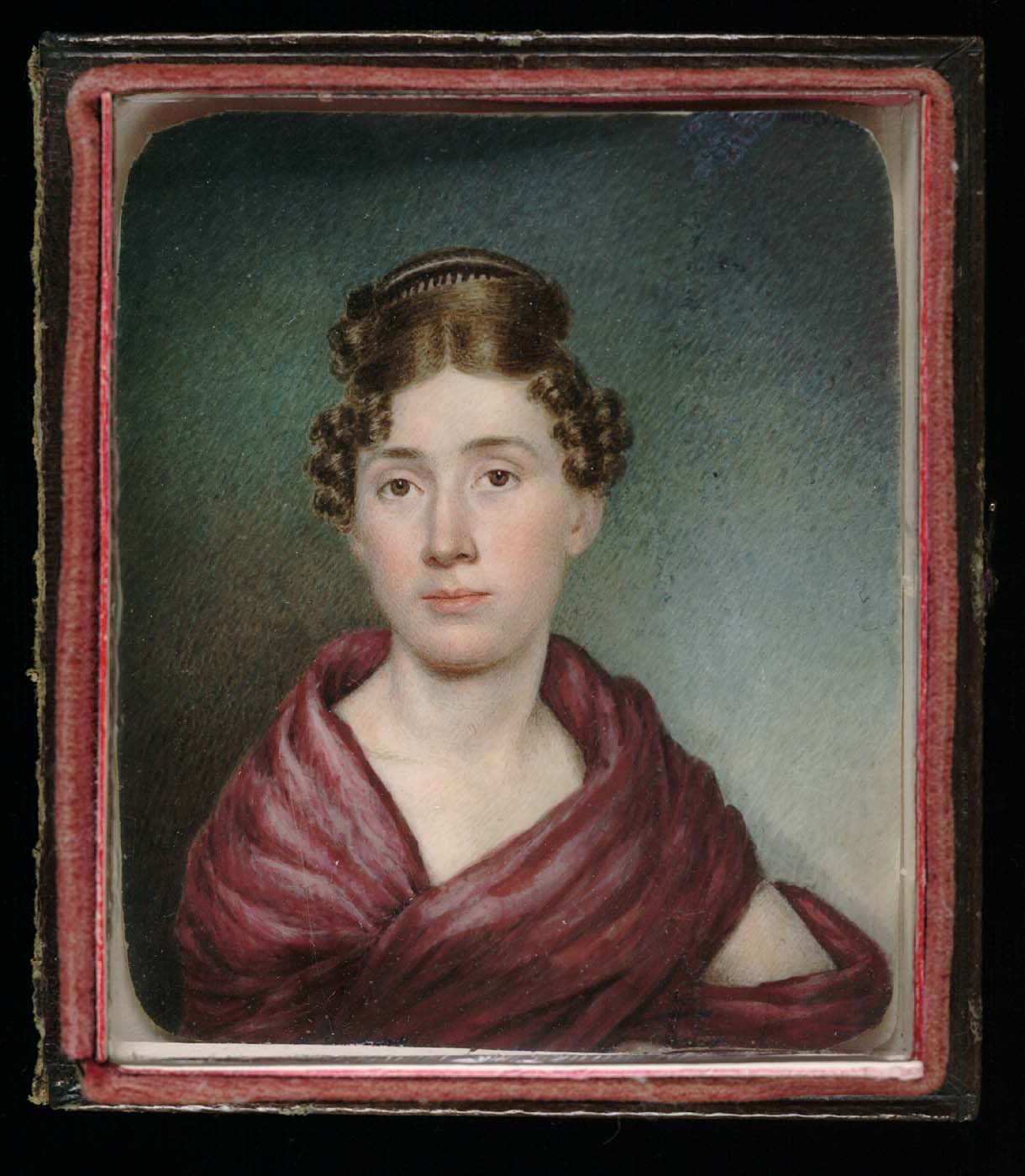 The Boston portraitist Sarah Goodridge painted this intimate self-portrait for the statesman Daniel Webster in 1828, the year of his first term as U.S. Senator. Their association is documented in forty-four letters that Webster wrote to Goodridge between 1827 and 1851. Webster sat for her at least twelve times over two decades, and she visited him in Washington, D.C.—the only time she is known to have left Boston. This provocative twist on the traditional lover’s eye miniatures so popular in London demonstrates the artist’s command of nuances of light and shadow and glowing tones captured through the use of transparent washes of watercolor on ivory.