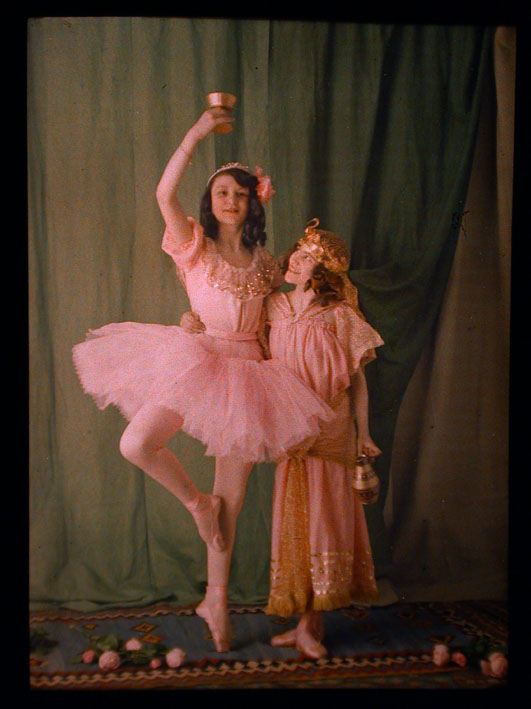 Dancers in Pink with Flowers by Jules Gervais Courtellemont, ca. 1910

Beautiful and stunning image by one of the early masters of the autochrome. Gervais-Courtellemont was born in the province of Seine-et-Marne in 1863, near Paris, but grew up in Algeria. During an adolescence spent in Algeria he developed a passion for the pre-colonial Orient that was to dominate his life, and in 1894 converted to Islam prior to making a pilgrimage to Mecca. Having taken up photography in 1877, he used it to illustrate both the books he published by himself and other authors, and, as lantern-slides, his popular lectures on journeys to the Balkans, China, Japan and the Middle East. In 1907 he adopted and soon completely mastered the Lumières’ new autochrome process. As already noted, Courtellemont had a passion for the Orient and his autochromes cover his journeys to Turkey, Egypt, Tunisia, Spain, India, Morocco and even China. In 1911, Courtellemont opened the “Palais de l’autochromie” in Paris, which comprised an exhibition hall, studio, laboratory, and lecture hall with a seating capacity of 250. It was in this hall that Courtellemont would project his autochromes both of the Orient and, after 1914, of the war, particularly the Marne battlefields. These lectures proved to be so popular that Courtellemont issued a twelve-part series later bound in book form called “The Battle of Marne” and later a four-part series entitled “The Battle of Verdun.” These are the first books ever published in color on war. Courtellemont’s work displays a tight sense of composition, an acute awareness of the interplay of light on color, and a haunting familiarity of symbolism. In 1923-5 he wrote a three-volume work, La Civilisation – Histoire sociale de l’humanité, illustrated with his photographs. He was a lifelong friend of the novelist, Orientalist and photographer Pierre Loti. While over 5,500 Gervais-Courtellemont autochromes survive in various institutional collections, his work in private hands is quite rare and sought after. Courtellemon died in 1931. The most noteworthy book on his work was made by B. De Pastre and E. Devos (eds.), “Les couleurs du voyage: L’oeuvre photographique de Jules Gervais-Courtellemont” (published in 2002).