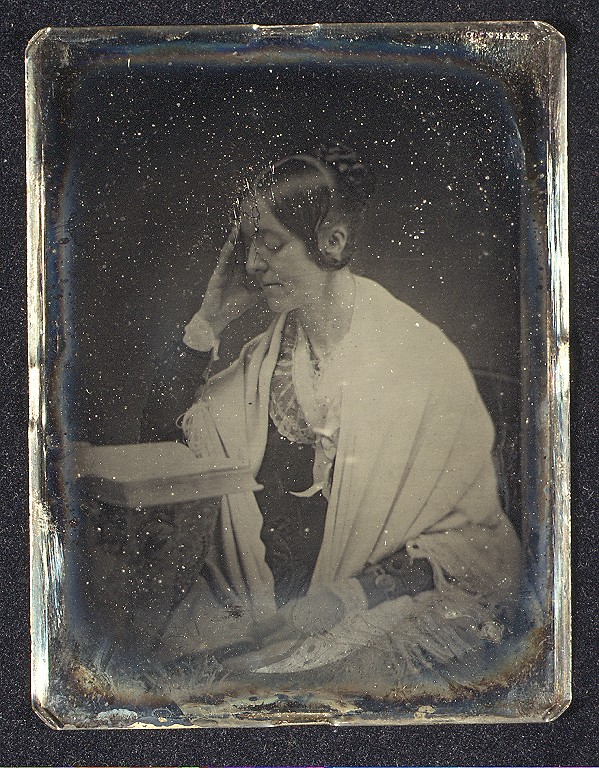 Probably a copy plate (possibly from an original by Plumbe Studio, New York, 1846; this sitting is referred to by Fuller in a letter to her brother, Richard Fuller, dated July 4, 1846 [Houghton Library, Harvard University]).

As an author, editor and journalist, Margaret Fuller (1810-1850) contributed significantly to women’s rights, political reform, and the formulation of transcendentalism. In 1844, Fuller began writing for Horace Greeley‘s New York Tribune; as the first female foreign correspondent, she traveled to England, Scotland, Paris, and Italy. An ardent supporter of Italian revolution would liberate women and the working class. While in Rome she met Giovanni Angelo Ossoli, with whom she had a son in 1848. When the revolution was quelled and the pope restored to power, Fuller, Ossoli, and their young son fled to Florence. She decided to return to America with her family, but on July 19, the three drowned when their ship hit a sandbar off the coast of New York. According to Greeley, Fuller’s Woman in the Nineteenth Century (1845) was “the loftiest and most commanding assertion yet made of the right of Woman to be regarded and treated as an independent, intelligent, rational being, entitled to an equal voice in framing and modifying the laws she is required to obey, and in controlling and disposing of the property she has inherited or aided to acquire…”