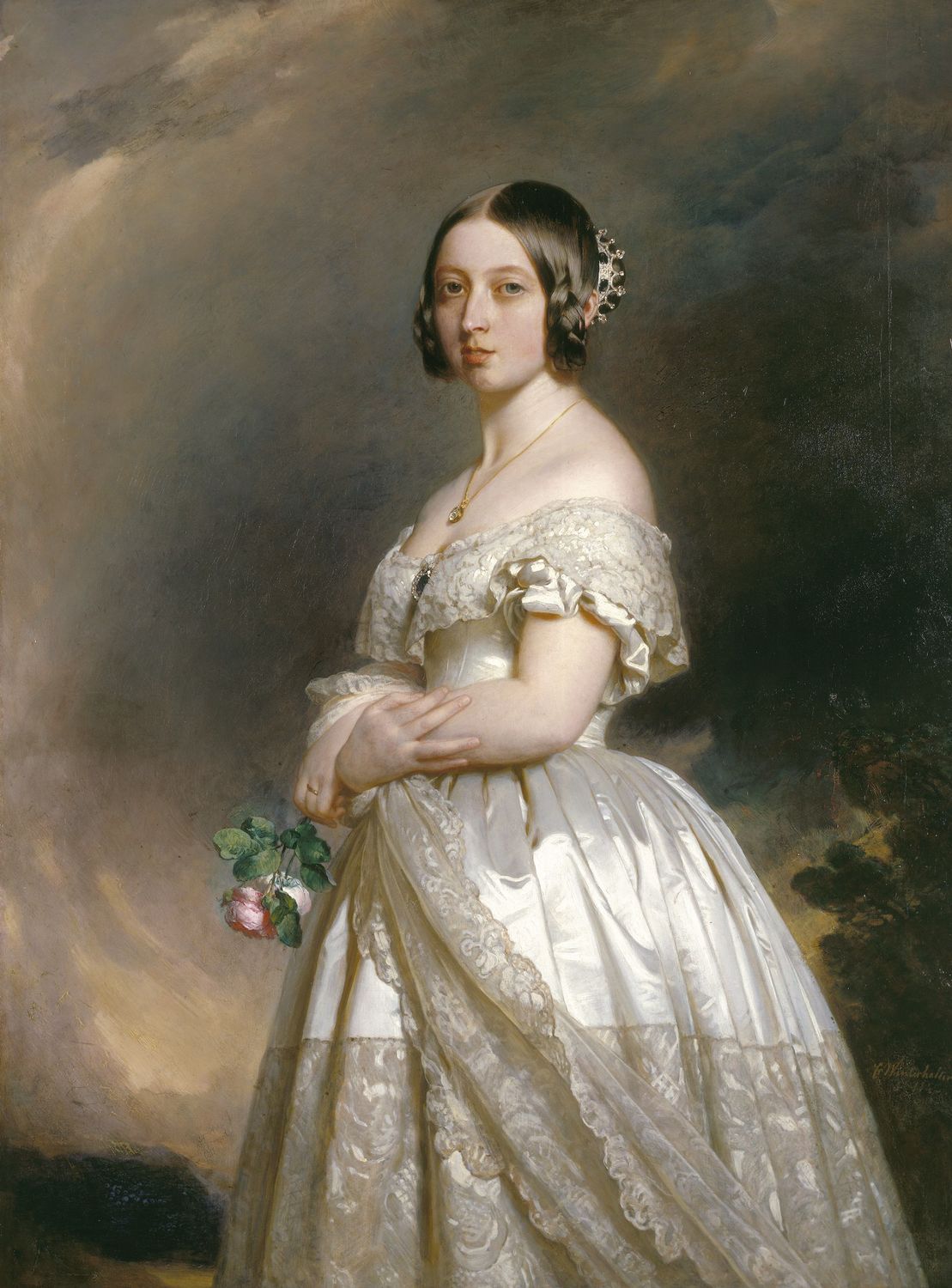 This official portrait and its pendant depicting Prince Albert were the first to be commissioned by Queen Victoria and her husband from the German artist Franx Xaver Winterhalter, who would become their favoured contemporary painter and would produce over one hundred works in oil for his royal patrons between 1842 and 1871. Winterhalter was recommended to the Queen by Queen Louise of the Belgians, wife of her uncle Leopold, who described the artist in a letter to Queen Victoria as ‘an excellent man full of zeal for his art, of goodwill, obligingness and real modesty’. He first arrived in London in May 1842 and returned each summer or autumn for six or seven weeks for many years.

Queen Victoria wears a white silk and lace evening dress with a number of items of jewellery of significant sentimental value. The sapphire and diamond brooch pinned to her bodice was a wedding gift from Prince Albert. The sapphire and diamond tiara is unconventionally worn at the back of the head over the fashionable plaited and looped hairstyle. Probably designed by the Prince in the year the portrait was painted, the tiara is said to have been inspired by a portrait of Henrietta Maria in the manner of Van Dyck (London, National Portrait Gallery, no. 1247). The spray of roses held by the Queen is also strikingly reminiscent of Van Dyck’s English portraits. The extravagant use of lace reflects the Queen’s known desire to encourage British producers such as those in Honiton. The pictures were hung in the White Drawing Room at Windsor Castle. Many replicas were subsequently commissioned for relatives and other sovereigns. In a version commissioned immediately from Winterhalter as an official gift to the French King Louis-Philippe (Musée national du Château de Versailles, inv 10032), the Queen additionally wears the insignia of the Garter. In 1846 Louis-Philippe presented the Queen in return with full-size copies in these portraits on Sèvres porcelain plaques. They were set into the walls of the Council Room at Osborne where they remain. Miniature versions were also produced in enamel to be set into bracelets.