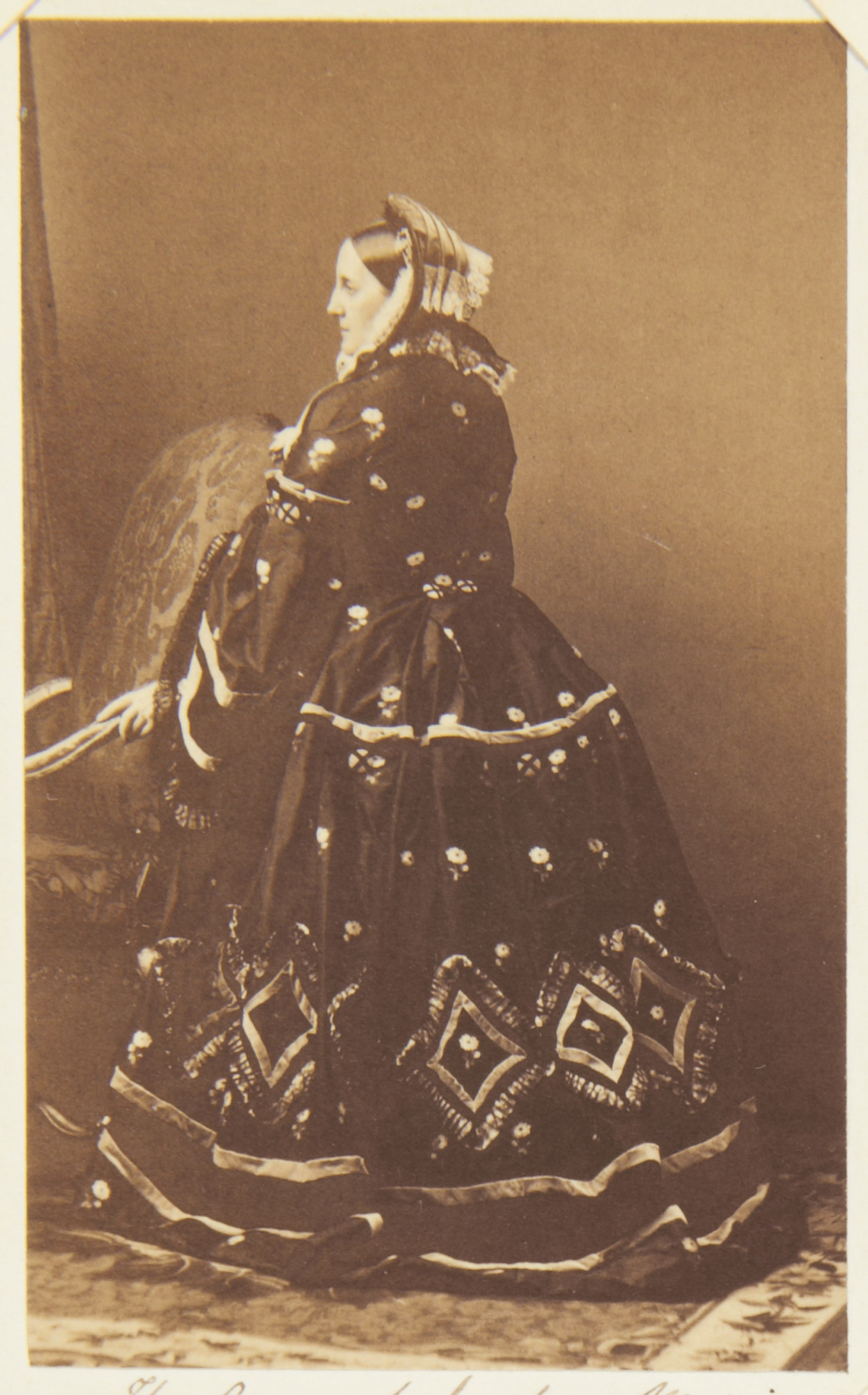 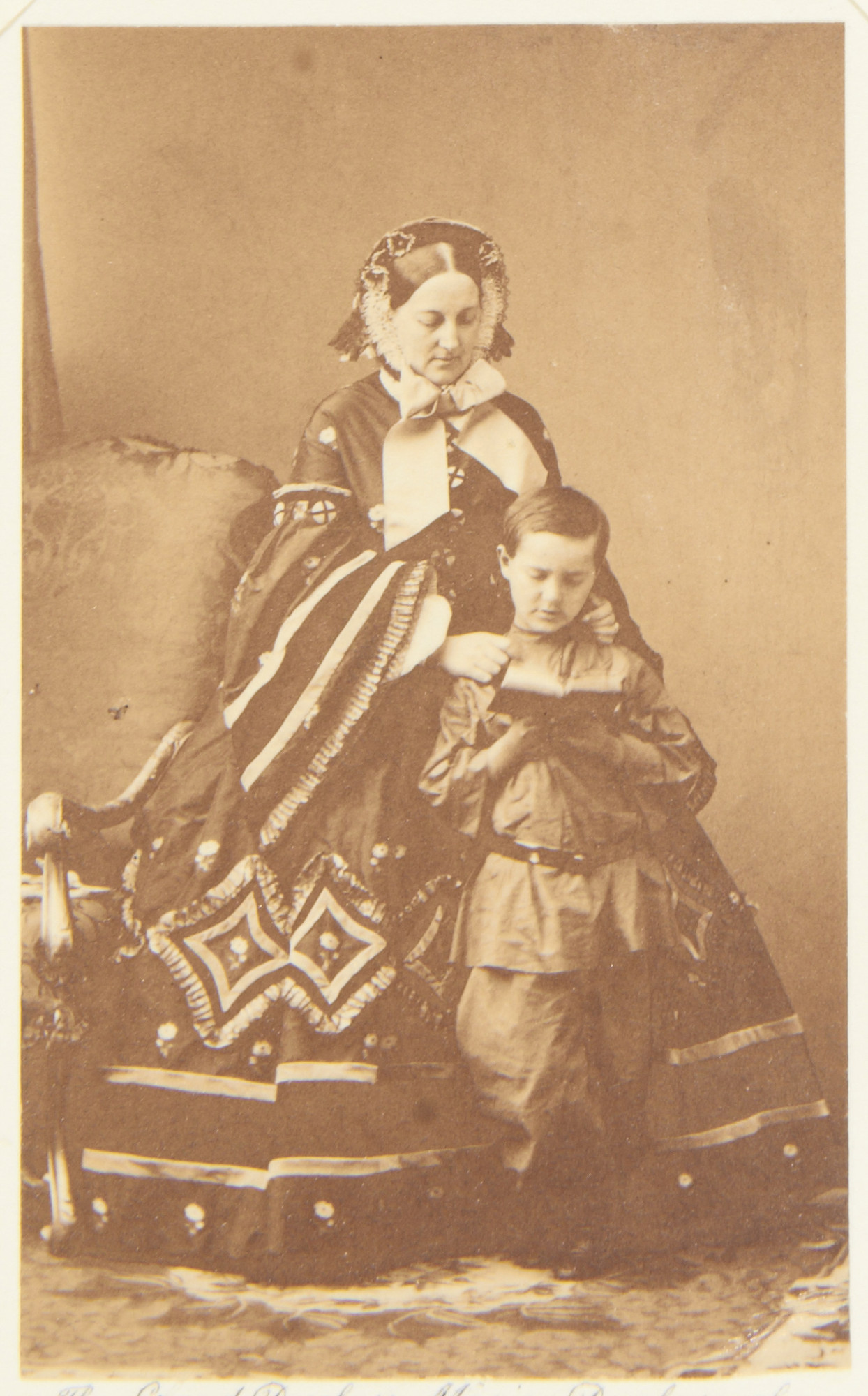 Grand Duchess Maria Nikolaievna of Russia (18 August 1819 – 21 February 1876) was a daughter of Emperor Nicholas I of Russia, sister of Alexander II and aunt of Alexander III. In 1839 she married Maximilian, Duke of Leuchtenberg.

Grand Duchess Maria Nikolaievna was born on 18 August 1819 in Krasnoye Selo, near Saint Petersburg. She was the second of seven surviving children and the eldest daughter. Her parents, Tsar Nicholas I of Russia and Empress Alexandra Feodorovna, born Princess Charlotte of Prussia, were devoted to each other and to their children. They were warm and affectionate parents, but avoided overindulging them. In the evenings, Alexandra Feodorovna played games with her children, including riddles and charades. The Tsar liked to sing chorus music with them. The siblings grew up in a close knit family, remaining in good terms all their lives.

Maria Nikolaievna was raised in the company of her sisters Olga and Alexandra. Their rooms, located on the ground floor of the Winter Palace, were unpretentious and void of luxury. The girls were prescribed fresh air in all seasons, and doctors controlled their diet. Classes began at 8:00 AM. Maria’s education was placed under the supervision of the liberal privy Counselor and poet Vasily Zhukovsky, who had previously been Alexandra Feodrorovna’s Russian teacher. Zhukovski remained in close terms with his royal wards until his death. Maria and her sisters received dancing, music and drawing lessons. Her childhood sketchbook (1826–1830) has survived and it is in the hands of her descendants living in the U.S.A. Grand Duchess Maria, who painted fairly well, later made watercolors. She never lost her love for the arts, becoming a benefactress and art collector. Artistically gifted, she showed an early interest in interior design, decorating her rooms with her personal style. She would later make her Palace in St Petersburg one of the most beautiful in the city. All three sisters had musical abilities and were involved in charitable work. From 1835, Grand Duchess Maria was an active member of the patriot’s society, which had been founded by Empress Elizabeth Alexeievna. The society occasionally met in session in Maria’s room at the Winter Palace.

Grand Duchess Maria Nikolaievna was noted for her formidable personality, her wit and her strong character. Her sister Grand Duchess Olga, wrote in her girlhood diary that Maria was “hot tempered, attentive and generous towards the poor, sympathetic to good deeds, but could not bear pretense of coercion. She is a hundred times more virtuous than me, more dynamic than all seven of us; she lacks only a sense of duty”.

Maria Nikolaievna was brave and inventive, appreciated novelty, and was almost indifferent to the opinion of high society. She was lively, energetic, talented and impulsive. In appearance and character she was like her father. She was Nicholas I’s favorite child and the one who resembled him most closely both in appearance and character. Like him she looked serious and severe. Her stare also brought to mind her father’s formidable gaze. The physical similarities with her father were marked in portraits and photographs that preferred to portray her in profile, the same as her father.

Empress Alexandra Feodorovna worried about finding a suitable husband for her most gifted and emotional daughter. On her part, Maria Nikolaievna did not want to leave Russia upon her marriage or have to change her religion.

In 1837 King Ludwig I of Bavaria sent his nephew, Maximilian, Duke of Leuchtenberg, to take part in cavalry maneuvers in Russia. Maximilian was the only surviving son of Eugène de Beauharnais and grandson of Empress Josephine. He was handsome, well educated and interested in cultural pursuits. A year later, in October 1838, he made a second visit. With his good looks and manners he impressed Maria Nikolaievna, as noted by the Grand Duchess Olga in her diary: “In four days it has become quite clear that Max and Maria were made for each other.”

It was not a desirable match for a daughter of a Russian Emperor. Maximilian was below the rank of royalty, only entitled to the style of Serene Highness as member of a secondary branch of the House of Bavaria. He was also Roman Catholic, not Orthodox, and his own family, his mother Princess Augusta of Bavaria in particular, was against this marriage. Maximilian was the last of the Leuchtenberg – Beauharnais family line and his mother feared that his descendants, brought up in the Orthodox faith, would be completely Russified. She said history would blame her son.

Furthermore the Bonaparte family had been bitter enemies of Russia. Nevertheless the Tsar granted his permission for the marriage on condition that his daughter did not leave Russia to live abroad. Since the Duke of Leuchtenberg was not a member of a reigning family, it was easy for him to take up residence in Saint Petersburg.

The wedding took place on 2 July 1839 at the grand church of the Winter Palace. The ceremony was described in detail by the Marquis de Custine, who visited St Peterburg at that time. He praised the Grand Duchess for her grace, but disliked the Duke of Leuchtenberg. Nicholas I spared no expense for his daughter’s wedding and the festivities lasted for two weeks. The couple remained in Russia, where their seven children grew up in the circle of the imperial family.

On their wedding day Tsar Nicholas I decided to present Maria with her own palace. He chose a site in the centre of St. Petersburg strategically positioned opposite St. Isaac’s cathedral, on the banks of the Moika river. No expense was spared in fitting it out for the young couple, specially commissioned from the architect Andrei Stackensneider and, close enough to the Winter Palace for the Tsar to pay daily visits to his daughter. The palace was finished by the end of 1844 and was named as the Mariinsky Palace, after Maria Nikolaievna. Whilst their palace was under construction Maria gave birth to three children. The couple lived in the Vorontzov Palace waiting for the completion of their own residence.

The grand duchess played a leading role in the decoration of her home, displaying her taste and sense of elegance. Because Maria Nikolaievna was afflicted with circulatory leg problems, the Mariinsky Palace was designed with a staircase without steps installed in the right wing connecting all three floors away from the main rooms. The palace was filled with works of arts and family relics, some of them inherited from Empress Josephine. Maria organized lavish parties, theatrical performances and concerts. Maria Nikolaevna also had a country estate, Sergievka, bought from the Naryshkin family and given to her as a wedding gift. Located west of Peterhof in a little bay opposite Kronstadt, the villa Sergievka became a favorite family retreat. The grand duchess and her husband spent their honeymoon there and between 1839 and 1842 they commissioned Stackensneider to rebuild it. It was transformed from an old manor house into a summer palace in the style of a Roman patrician villa. In the summer they usually lived in Gatchina and Tsarskoye Selo.

Grand Duchess Maria Nikolaievna and her husband had artistic inclinations and were active in charitable and artistic causes. Maria’s husband became well known as a scientist throughout Russia. He took an interest in science and studied mining technology; he was a member of the academy of Science. In 1844 Nicholas I appointed him head of the Mining Engineering department. In 1843 he was appointed President of the Academy of Arts. Maria was proud of her husband’s accomplishments,’ calling him a scholar. However by the late 1840s the couple drifted apart. They had separate lives and both had love affairs of their own. Maximilian became a well known womanizer while Maria started a long term relationship with Count Gregory Alexandrovich Strogonov. Court rumors attributed the paternity of her son George to her lover. The Duke of Leuchtenberg developed tuberculosis during mining expeditions in the Urals. Efforts to improve his health traveling to warmer climates abroad were unsuccessful and he died on 1 November 1852.

The Grand Duchess was an avid art collector, and after the death of her husband, she replaced him as President of the Academy of Arts. From then on, Maria Nikolaievana devoted herself to her collection with even greater ardor. She spent lavishly, and as a consequence, her finances declined, particularly after the death of her father. Alexander II, although close to his sister, kept her on a strict budget.

Maria Nikolaievna made a second marriage in 1854, to Count Grigori Stroganov (16 June 1824 – 13 March 1879). It was a morganatic union and was kept secret while her father lived. Officially the marriage did not take place until 16 November 1856, after Nicholas I’s death. Anna Tyutcheva commented, “The former tsar would have sent Masha to a convent and exiled the count to the Caucasus”, but her more gentle brother Tsar Alexander, as the new head of the family, preferred not to let on that he knew about the secret marriage. Her sister Olga described her as more talented than all her brothers and sisters put together, but lacking a sense of duty. Maria begged her brother to recognize her second marriage and permit them to live in Russia, but he did not dare permit it; instead, he suggested she continue to live abroad while he maintained ignorance of their marriage. Because he could not recognize her marriage, he paid special attention to her children by her first marriage, who lived in St. Petersburg without their mother.

In 1862, Maria Nikolaievna installed herself in Florence in the Villa Quarto, which had belonged to Jérôme Bonaparte, and appointed the painter and collector Karl Liphard as her advisor. They went almost daily to visit museums, private collection and antique dealers. In Italy, the Grand Duchess was zealous in her purchases of painting, sculptures and furniture for the complete refurbishing of her residence.

Grand Duchess Maria probably suffered either from varicose veins or from some sort of bone disease, and by the end of her life she had become an invalid. She died on 21 February 1876 in Saint Petersburg at age 56.

On her death in 1876, Maria Nikolaievna’s art collections were divided among her surviving children: Prince Nicholas of Leuchtenberg, his brothers Eugene and George, their sisters Princess Maria of Baden and Princess Eugenia of Oldenburg and their half-sister, countess Elena Strogonova. In 1884, her son, Nicholas Duke of Leuchtenberg, mounted an exhibition at the St. Petersburg Academy of Fine Arts with the Grand Duchess former collection. In 1913 another exhibitions was organized at the Hermitage Museum entitled the Heritage of Grand Duchess Maria Nikolaievna. After the revolution the collection was dispersed and now can be enjoyed in museums in Moscow, Saint Petersburg, Vienna and the United States. Three of Maria’s sons by the Duke of Leuchtenberg lived in her former residence the Mariinsky Palace until 1884, when it was sold to the treasury to pay for the family’s mounting debts. Today the Palace houses the Saint Petersburg Legislative Assembly.

Grand Duchess Maria Nikolaievna had seven children from her marriage to the Duke of Leuchtenberg. She had two children in her second marriage. 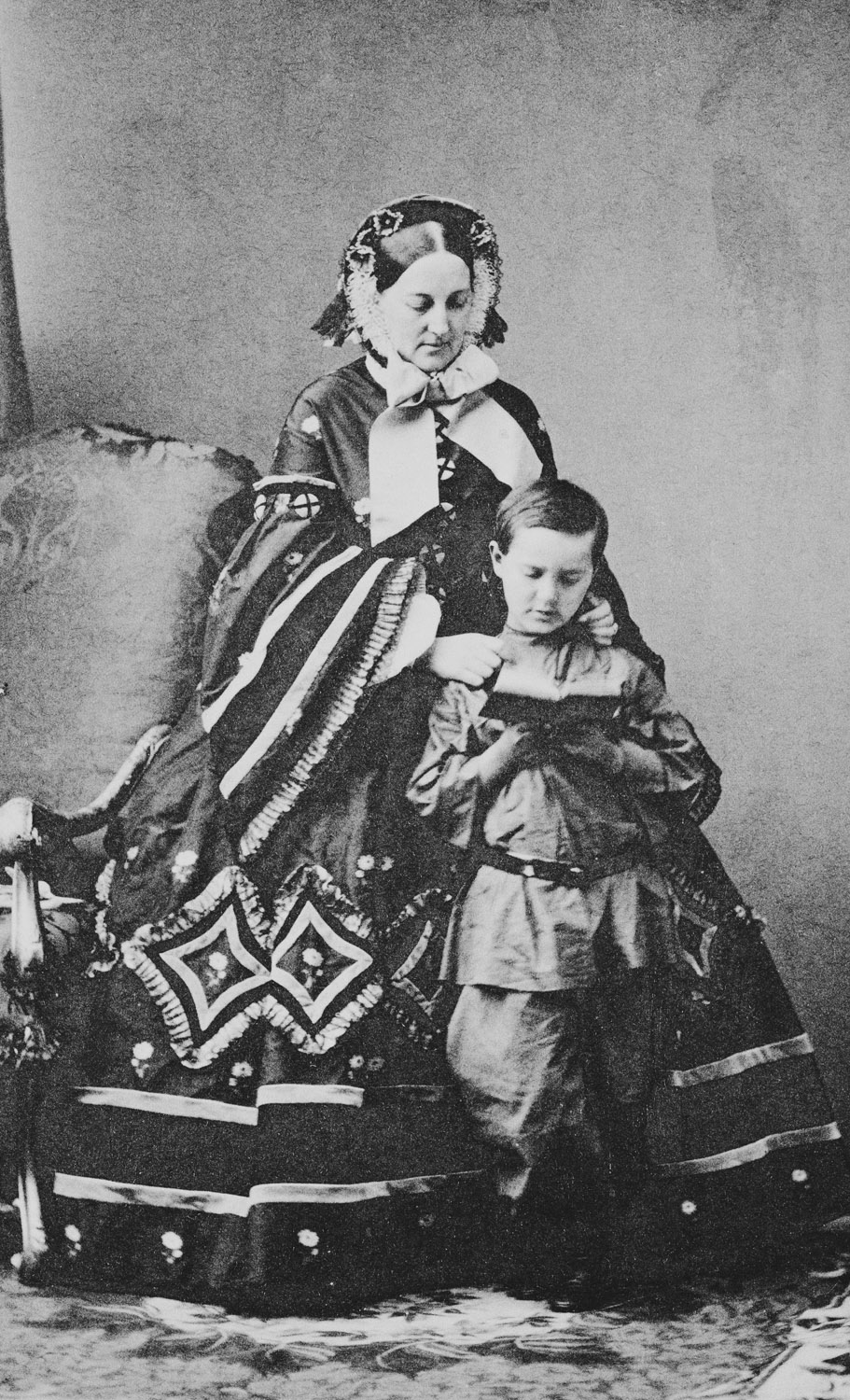 On the above photos the Grand Duchess is forty years old and had already delivered eight children! And she would give birth to her last child two years later, when already fourty-two years old. The child on the photo is her youngest son from her first marriage, Prince George, 6th Duke of Leuchtenberg who is there about seven years old. 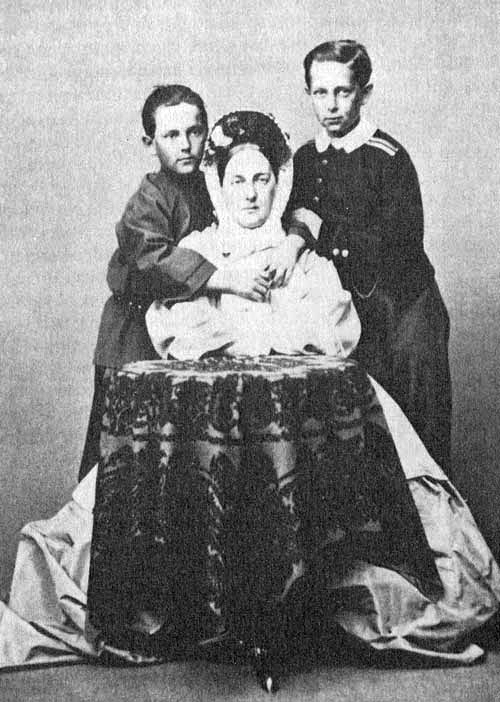 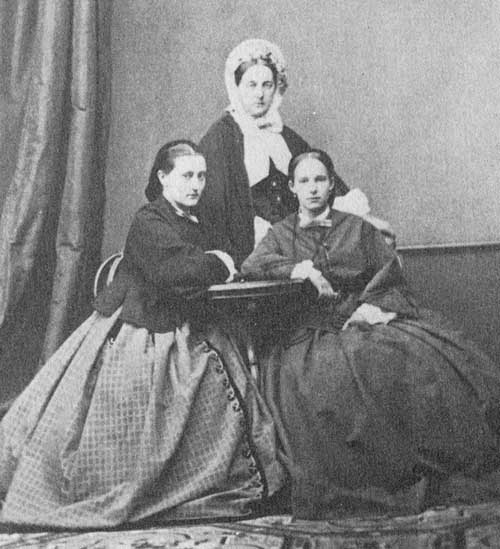