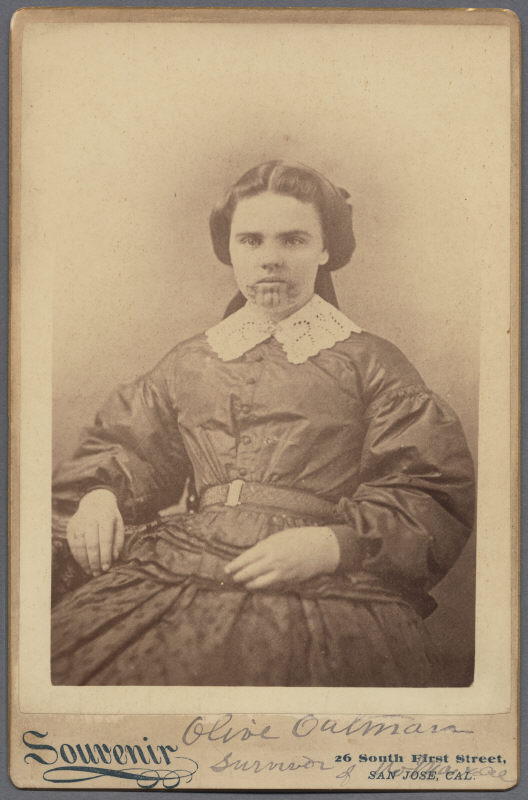 Olive Ann Fairchild, Indian captive and lecturer, daughter of Royse (Royce) and Mary Ann (Sperry) Oatman, was born in Illinois in September 1837 or 1839. She was one of eleven siblings, including one that was unborn.

In 1850 the family joined a wagon train along the Gila Trail led by James C. Brewster, a Mormon leader who convinced his followers that he had a divine call to take them to an imaginary territory named Bashan. The train was bound for the part of the Colorado River now in Southern California. The train split several times until theOatman’s and their seven children were left to travel alone.

On February 18, 1851, Yavapai Indians attacked them on the Gila River in Arizona. Roys Oatman, his pregnant wife, and three of their children, Lucy Roy Jr. and C. A, were killed.  The only survivors were Lorenzo Oatman, Olive Oatman and their seven-year-old sister, Mary Ann .Lorenzo was left for dead with wounds to his head, but recovered and returned to Casa Grande, one of the last rest stops of the Oatmans.  Olive and her sister Mary were captured.

The girls were roped together and stripped of their shoes, then forced to run the entire night without sleep. The next day, the sisters almost choked to death, overcome by the sand and dust of the Arizona desert. But they suffered even more hardship; if they began to lag behind the Yavapais, they would be beaten. When Olive and Mary Ann asked for rest and water, the Yavapais responded by pricking them with lances.

Once they arrived at their destiny, they were forced into hard labor, and into walking on hot coals without shoes. Yavapai children beat them with rods and burned them with flaming sticks. The girls were held as slaves for a year at a village near the site of modern Congress, Arizona.

Ultimately, the sisters were to the Mohaves for two horses, some vegetables, several pounds of beans and three blankets.  They once again had to survive inhuman conditions, as the Mojave forced them to walk for about ten days, only giving each one small piece of meat along the way.  Chief Espanesay and his wife saw the Oatman sisters as their own daughters and gave them a home, providing them with food and love. Olive and Mary’s chins were marked with indelible blue cactus tattoos to proclaim their status as slaves. In 1854 during her stay at Chief Espanesay’s home, Mary Ann, weakened by disease and all the hardships she had undergone, died.

In the winter of 1855-56, the army located her and began negotiations to free her. On February 28, 1856, wearing a bark skirt and able to speak only a little English, Olive was ransomed at Fort Yuma, Arizona, for a horse, blankets, and beads. There she was reunited with Lorenzo.

The girls, from the Mojave point of view, were lucky to have fallen into their hands, away from the Tonto Apaches. The chief attached them to his household, and they were afforded the best Mojave facilities, seeds for planting, love, divergence from Mojave customs.

In 1856, a Mojave named Francisco traveled to Fort Yuma, where he reported that Olive was being kept by the Mojaves. The military outpost stationed there traded some goods to the Mojave in exchange for Olive. Her brother Lorenzo had spent five years looking for her and Mary Ann. Upon receiving the news that Olive was in Fort Yuma, he ran to her side and the two were overjoyed about seeing each other again. This meeting made headline news across the West.

In 1857, a pastor named Royal B. Stratton wrote a book about Olive and Mary Ann. The book sold 30,000 copies, a best-seller for that era. In November, 1865, Olive married John B. Fairchild. Though it was rumored that she died in an asylum in New York in 1877, she actually went to live with Fairchild in Sherman, Texas, where they adopted a baby girl, Mamie.

Rumors of Olive Oatman being raped by the Yavapai were denied vehemently, leading her to declare in Stratton’s book that “to the honor of these savages let it be said, they never offered the least unchaste abuse to me”. In 1981, a writer named Richard Dillon reported in a famous western magazine that there was evidence that Olive had told a friend that she was married to the son of the Mojave chief and that she gave birth to two boys when married to him. Whether she was raped or not, or whether she was married and had two Mojave babies, was never determined for certain.

Olive Oatman Fairchild died of a heart attack in 1903, at the age of 65. The town of Oatman, Arizona is named in her honor.