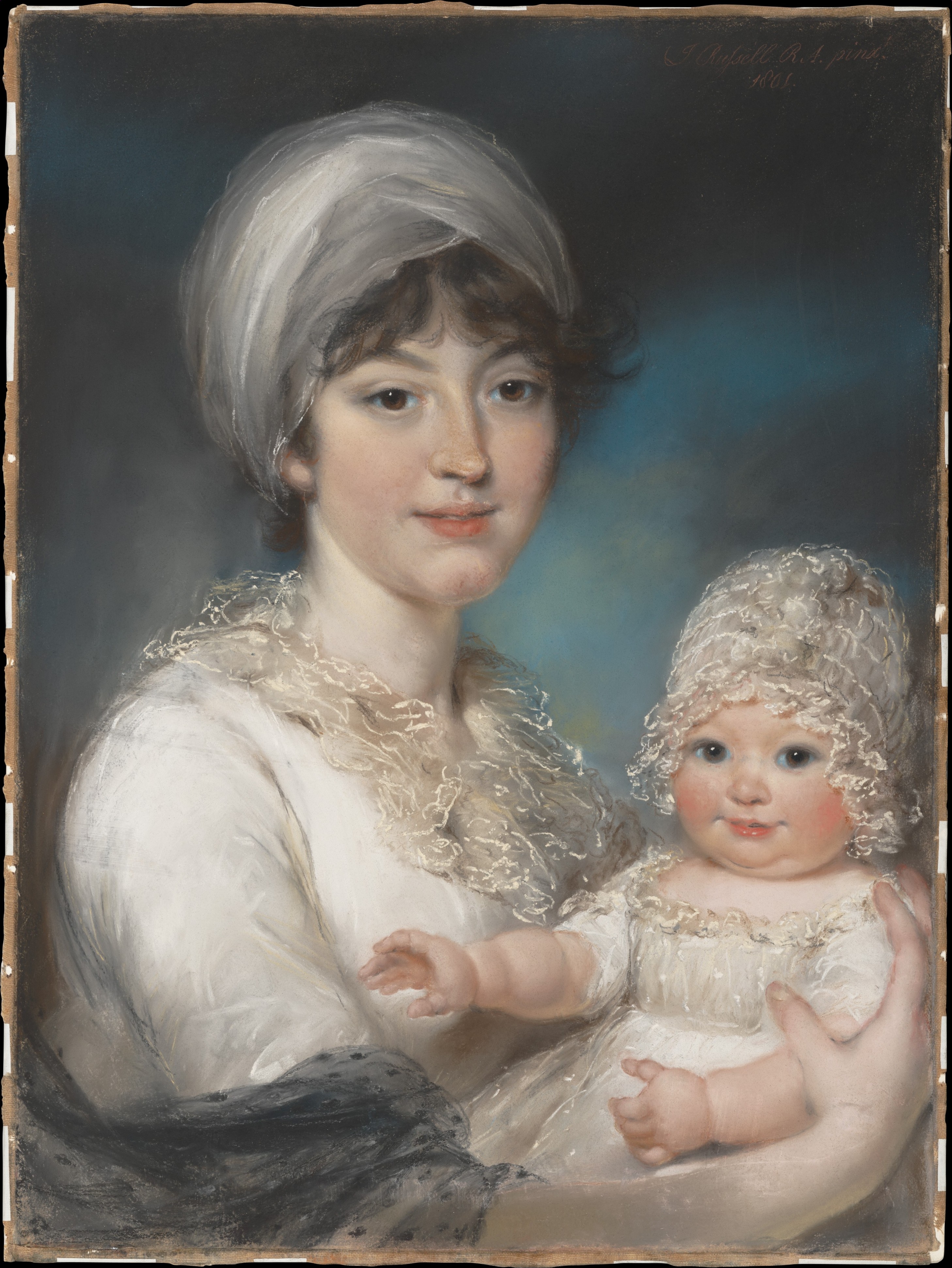 Henrietta Ann Jane Russell (1775–1849) was the sixth of twelve children born between 1770 and 1785 to John Russell and his wife Hannah Faden (1745–1816); she was the eldest child to survive to maturity. She is shown here at the age of twenty-five, around the time of her marriage to Robert Shurlock (1779–1847) of Chertsey, near Guildford, Surrey in 1800. Henrietta and Robert had fourteen children, the first of whom, Ann, is portrayed here. This portrait was likely begun around the time of the marriage. Here the young mother, wearing an elegant white gown and a cap and shawl made of gauzy fabrics, cradles her infant. An inscription on a label on the reverse states that Russell added the child to the composition at a later date, which explains the unusual length of the mother’s right forearm.

Ann was Russell’s first grandchild and it is easy to locate in this painting a new grandfather’s pride, from her pink cheeks and wet lips, to her pudgy arms and double chin. The pastel medium lends itself to the textures of the gauzy fabrics worn by both mother and baby, as well as to the more precise detailing of the lace. Russell often painted his sitters without showing their hands, and the hands here attest to some compositional difficulty: the fingers of the baby’s right hand are unusually splayed, while her mother’s hand and forearm are awkwardly elongated. This portrait was given to the MET Museum in 1967 by the sitter’s great-grandson. 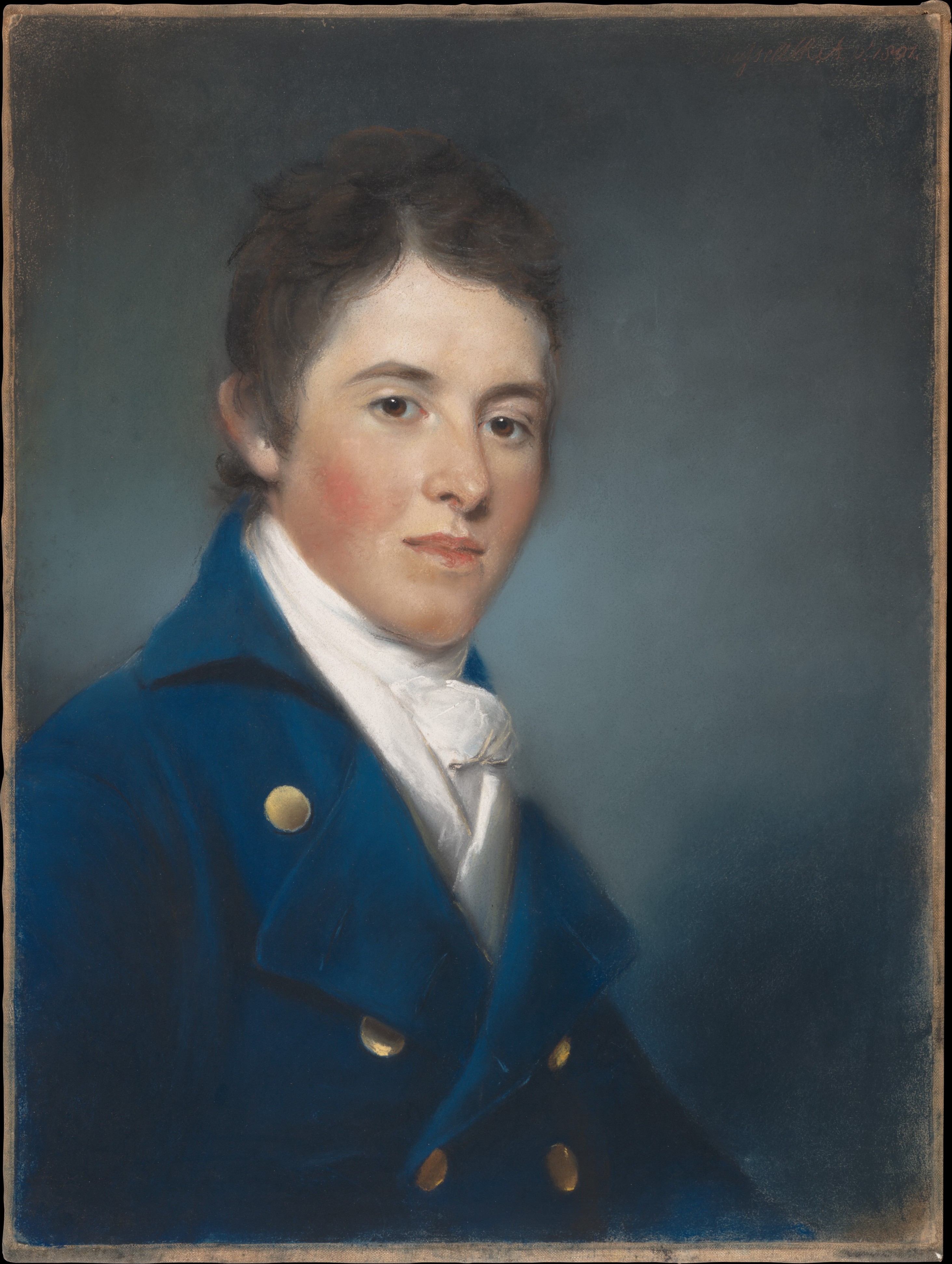 And this older lady is the husband’s mother, Mrs. Robert Shurlock Sr. (Ann Manwaring). Painted in the same year by the same hand: 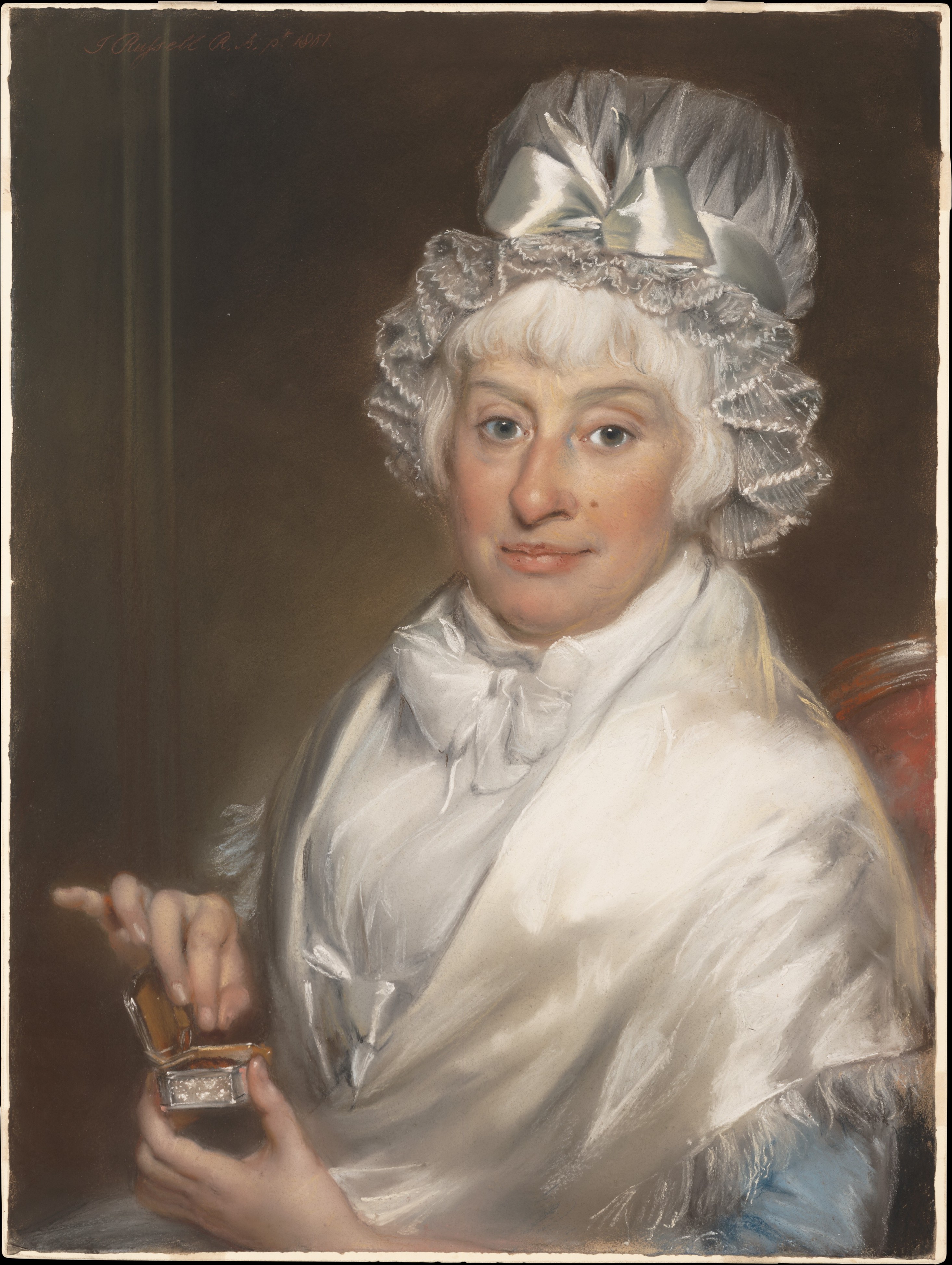 Mrs. Shurlock is the mother of Robert Shurlock, the artist’s son-in-law. She was painted by Russell in 1801, around the time he made portraits of his daughter Henrietta and her husband. The elder Mrs. Shurlock is pictured here taking snuff from a small, decorated snuff-box. The ribbon on her bonnet and the sheen of her shawl give Russell the occasion to display his skill with the pastel medium. Her skin tones are much more smoothly applied, although up close it is still possible to pick out the different pastel colors (yellow, blue, peach) that Russell used. Unusually, Russell gives some suggestion of a domestic interior in this portrait: Mrs. Shurlock sits in a chair with red upholstery and some architectural detail is visible at upper left.