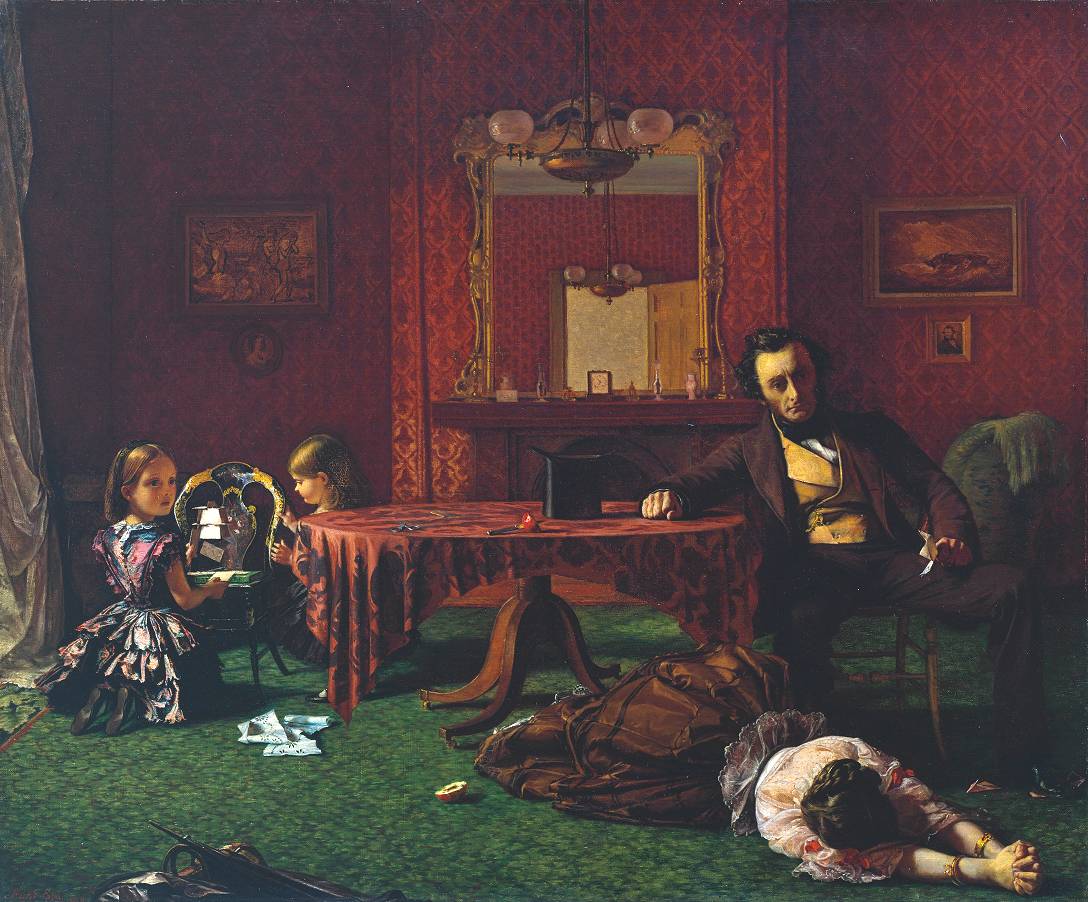 This is the first of a set of three modern-life pictures on the theme of the fallen woman. The other two are also in the Tate collection. They are typical of the social moralist pictures that were popular in Victorian art.
.
The theme of the triptych is the discovery of the woman’s infidelity and its consequences. In this first scene the wife lies prostrate at her husband’s feet, while he sits grimly at the table and their children (the older girl modelled by William Frith’s daughter) play cards in the background. The husband is holding a letter, evidence of his wife’s adultery, and simultaneously crushes a miniature of her lover under his foot. The setting is an ordinary middle-class drawing room, but closer observation reveals that the room is full of symbols.
.
Egg was clearly influenced in his approach by Holman Hunt’s The Awakening Conscience of 1853 (Manchester City Art Galleries). The house of cards is collapsing, signifying the breakdown of the couple’s marriage. The cards are supported by a novel by Balzac – a specialist in the theme of adultery. An apple has been cut in two, the one half (representing the wife) has fallen to the floor, the other (representing the husband) has been stabbed to the core. As a parallel, the two pictures on the wall depict the expulsion of Adam and Eve from the Garden of Eden (labelled The Fall); and a shipwreck by Clarkson Stanfield (labelled Abandoned). The couple’s individual portraits hang beneath the appropriate image.
.
In the background of the picture the mirror reflects an open door, denoting the woman’s impending departure from the home. The position of her arms and the bracelets round her wrists give the impression that she is shackled. In Victorian England a man could safely take a mistress without fear of recrimination, but for a woman to be unfaithful was an unforgivable crime. As Caroline Norton, an early feminist, wrote, ‘the faults of women are visited as sins, the sins of men are not even visited as faults’ (quote in Lambourne, p.374).
.
The set of pictures was exhibited at the Royal Academy in 1858 with no title, but with the subtitle, ‘August the 4th – Have just heard that B – has been dead more than a fortnight, so his poor children have now lost both parents. I hear she was seen on Friday last near the Strand, evidently without a place to lay her head. What a fall hers has been!’
.
Frances Fowle, December 2000