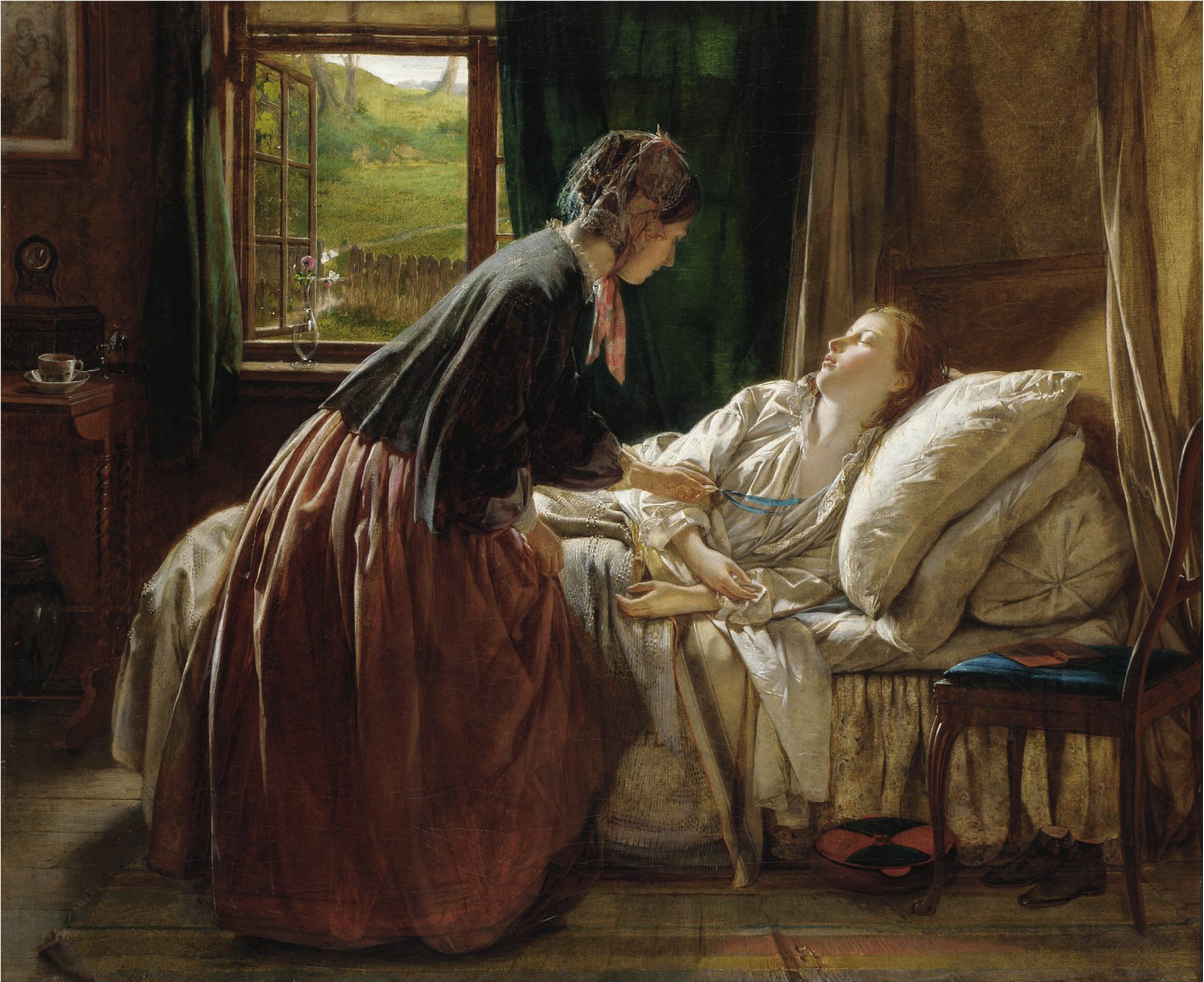 ‘This picture, beautifully painted, poses some nice problems. The ‘discoverer’ is obvious enough – the lady with the wedding ring (always look out for the wedding rings in Victorian narrative pictures) bending over the bed, but what is in the locket she is examining and who is the sleeping girl?’ — Sir David Scott

Thomas Edward Roberts’s painting The Discovery is a fascinating conundrum. Victorian painters of genre subjects are usually careful to place their trail of clues in such a way that the work’s intended message can be worked out and understood without confusion. Here, however, we appear to be faced with a problem painting, which remains agonisingly unresolved and intriguing.

Two young women are seen in a bedroom together, one a visitor to the room who is dressed and prepared to go out, the other still in her night dress and remaining asleep although the day outside is bright. Through the window is a garden, with a fence and path leading out into a wider landscape with mountains beyond. The ‘discovery’ is made by the visitor, who notices and then opens a locket worn by the sleeper on a blue ribbon and which has fallen from its customary safe-hiding in her bosom. Although we witness the moment of revelation, still no clue is given as to what secret is revealed by the contents of the locket or its inscription. However, as Lindsay Errington suggested in her essay in the catalogue Sunshine and Shadow: The David Scott Collection of Victorian Paintings, the meaning of the painting may perhaps be read from the simple motif of a flower in a vase on the window-sill around which two butterflies flutter. It seems that the two girls love the same man (Dr Errington suggests he may even be the husband of the visitor), although neither had previously known of the other’s affection. If the locket contains his portrait, or a letter from him, or is engraved with some loving inscription, then it is presumably the sleeping girl who receives his love, and the visitor who is mislead. The shock of this realisation resonates through the composition; the red scarf that hangs at her neck assumes a threatening association suggesting the flow of blood streaming from a self-inflicted wound.

From the 1860s onwards there was great interest in the significance of dreams, and even prior to the theorisation of Freud at the end of the century, awareness that the pattern of an individual’s dreams might provide a glimpse into the sub-conscious and clues to unspoken fears and desires. In Victorian art, the representation of sleeping figures is usually intended as an allusion to sexual thoughts of a kind which could not be described verbally or pictorially. Roberts’ painting transcends moral boundaries – even to see a respectable young woman asleep in a bed with her hair undressed was a rare thing outside the confines of married life. It is possible that the painting may depend upon a literary text, but if so this has not been recognised. If the theme is the product of the artist’s own imagination, it must be seen as one that is deeply disturbing, and at the same time immensely exciting pretext for a painting – and of an originality that is amazing in the context of lesser known Victorian artists.