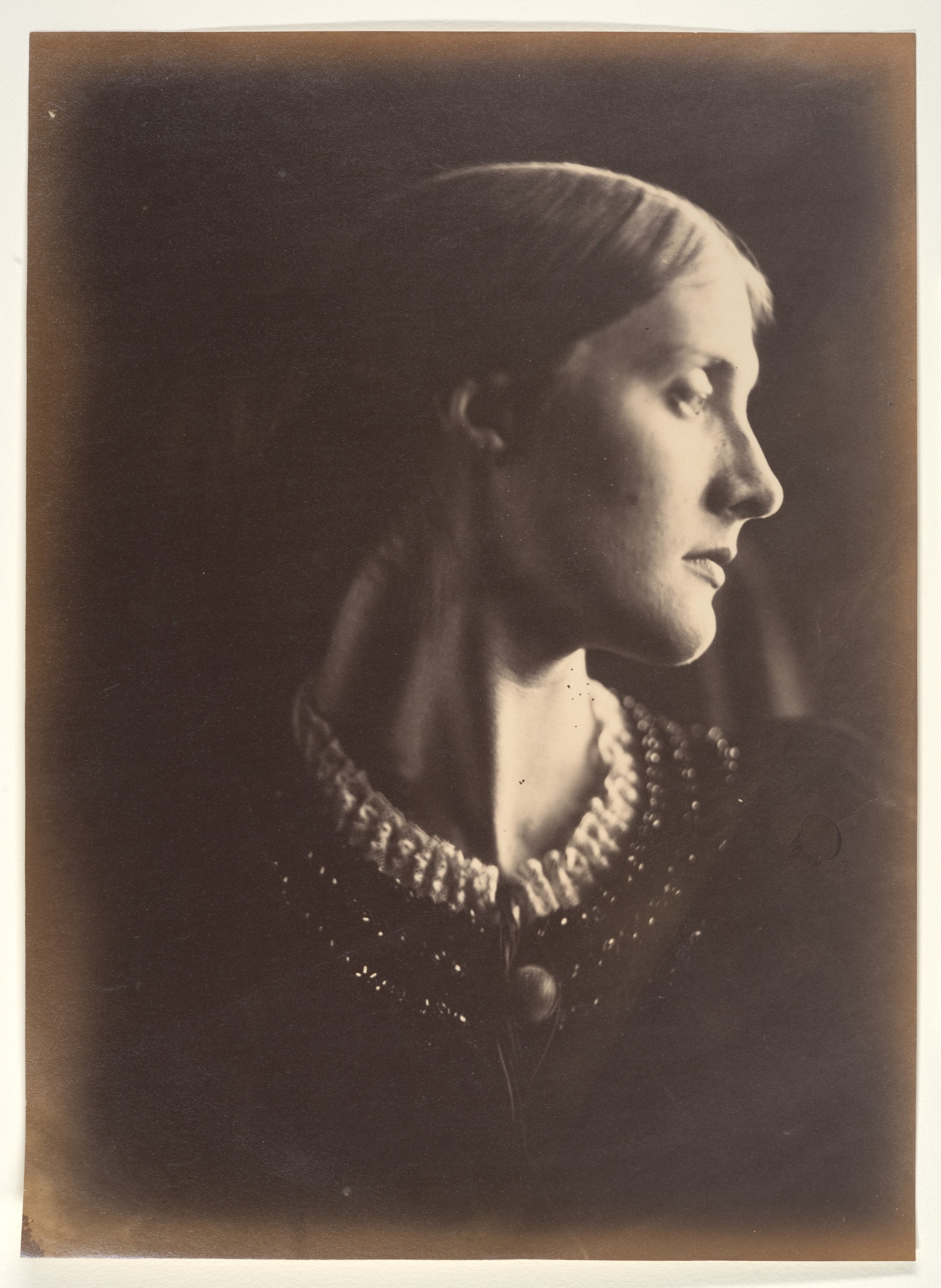 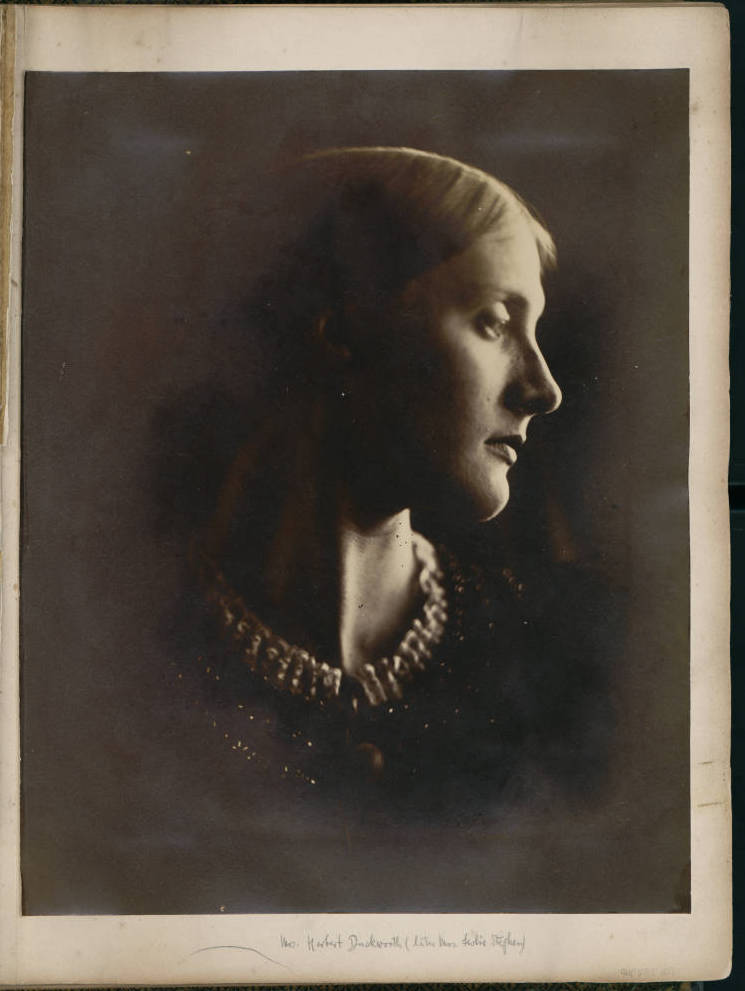 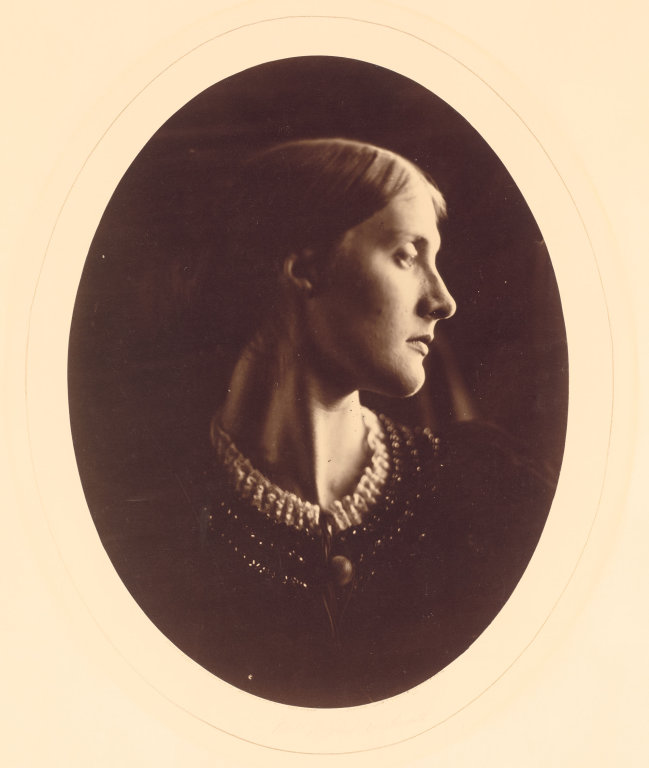 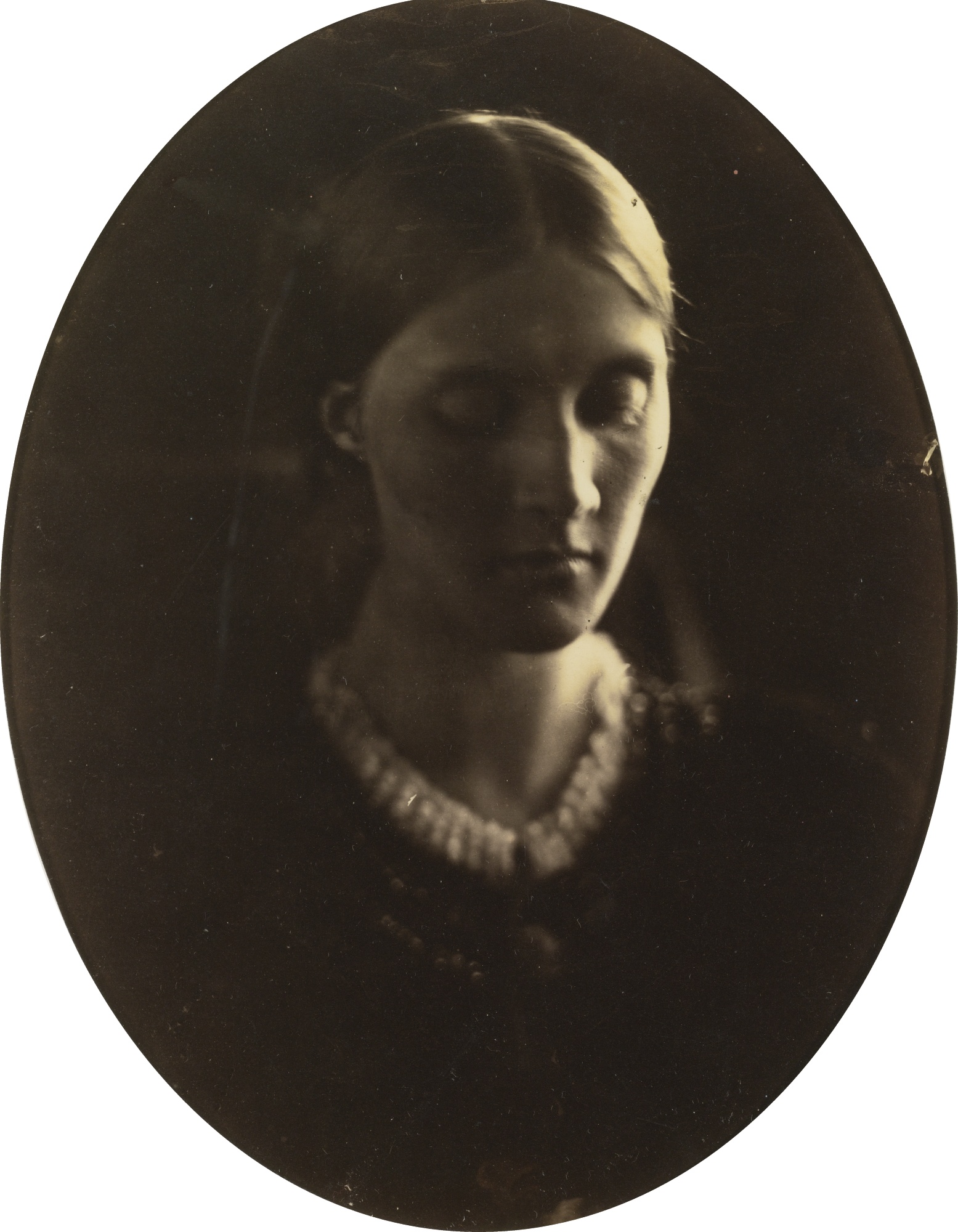 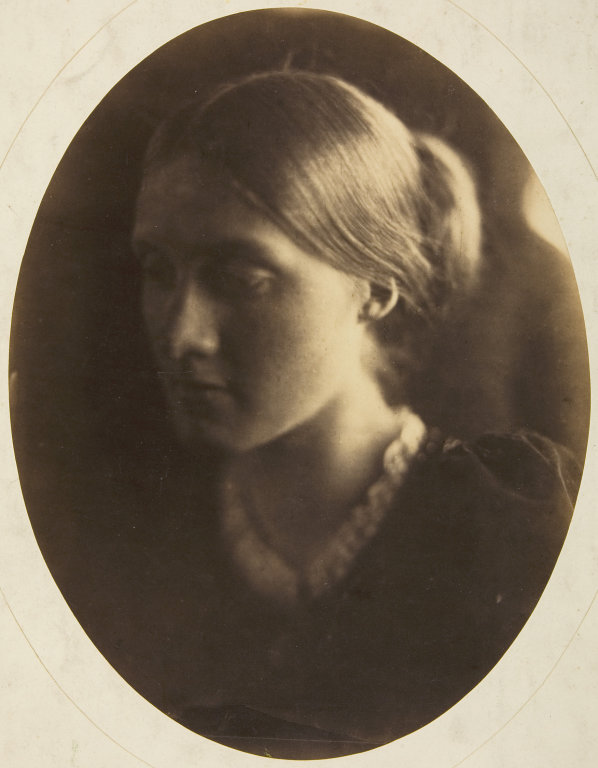 “This portrait of Julia Jackson, which is usually trimmed to an oval, suggests an antique cameo carved in deep relief. Its success lies partly in its subject’s actual beauty and partly in the way the photographer modeled it to suggest Christian and classical ideals of purity, strength, and grace. The photograph was made the year Julia married Herbert Duckworth. Three years later she was a widow and the mother of three children. Her second marriage, in 1878, to the great Victorian intellectual Sir Leslie Stephen, produced the painter Vanessa Bell and the writer Virginia Woolf. In her novel To the Lighthouse (1927), Virginia portrayed her mother as the searching, sensitive Mrs. Ramsay, ever suspended in thought. “She bore about with her, she could not help knowing it, the torch of her beauty; she carried it erect into any room that she entered.”
.
“In Julia Margaret Cameron: The Complete Photographs, Julian Cox locates only one print of this image, the example offered here.  A second print of this portrait, however, was offered as Lot 77 in the same 1994 Sotheby’s London sale from which the present photograph was purchased. Julia Margaret Cameron’s sensitive portrait of her niece and goddaughter, Julia Prinsep Jackson, came originally from the personal collection of the sitter and was one of seven Cameron photographs, all with the same provenance, offered at Sotheby’s London in 1994.  In Julia Margaret Cameron’s Women, Stephanie Lipscomb observes that Cameron photographed Jackson repeatedly throughout her career; ‘yet, unlike most of her other female subjects, whom Cameron portrayed as characters from biblical, classical, or literary sources, Julia was almost always represented as herself, simply and eloquently, without pretense’ (p. 222).
.
A great beauty, Jackson sat for many artists of the day and served most notably as the model for Mary in Edward Burne-Jones‘s Annunciation.  She was widowed in 1867 with the death of her first husband, the barrister Herbert Duckworth.  Later she married Sir Leslie Stephen, and among the couple’s children were painter Vanessa Bell and author Virginia Woolf. “
.
“I longed to arrest all beauty that came before me, and at length the longing has been satisfied,” wrote Julia Margaret Cameron, 10 years after first taking up a camera in 1864. Cameron became known for achieving dramatic emotional effect in her oversize photographs, often through the cultivation of apparent technical imperfections.
.
In a memorable series, she turned her camera on her niece, Julia Jackson, known at the time as a great beauty and who, from the age of 10 and into her adult years, posed for celebrated sculptors and painters. Over the course of a decade, Cameron made dozens of portraits of Jackson—as a young woman, then a wife, and then a widow—in intimate images that range from demure to confrontational. In this profile view, made just after Jackson’s wedding to her first husband, Herbert Duckworth, Cameron captured both her mature beauty and her extraordinary strength.”
..
There is a picture of newly-wed Julia and Herbert Duckworth (see my other post here) in which Julia wears the same blouse as in the sitting of the above photos.
..
source: MET Museum, Sotheby’s, Chicago Art Institute, University Texas at Austin
.