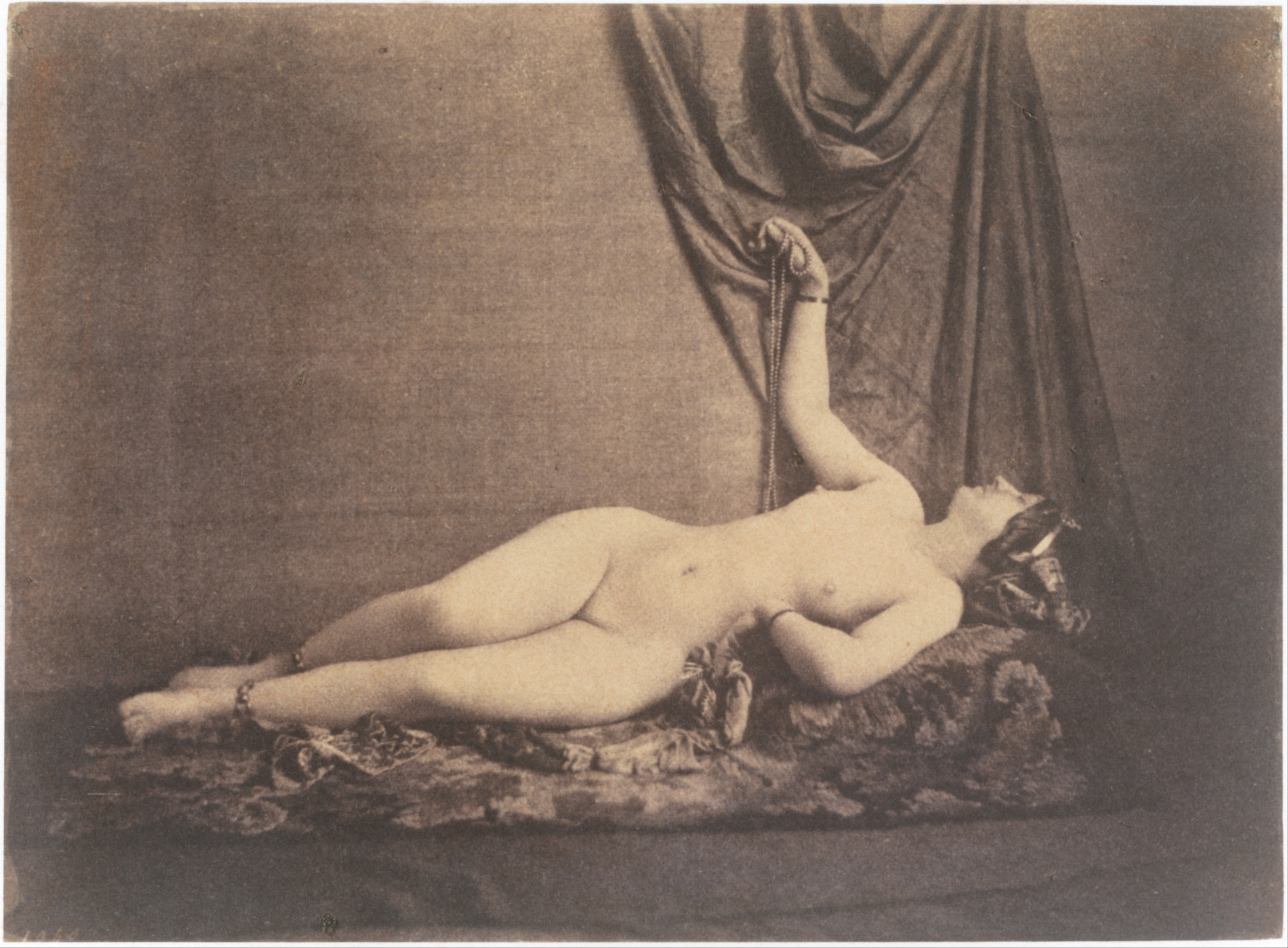 ” A student of the painter Jean François Millet and a lithographer of scenes of daily life, costume, and erotica in the 1820s and 1830s, Vallou reportedly took up photography in the early 1840s, but his early photographs have not been identified. Perhaps they depicted naked women, a subject for which it was improper to acknowledge authorship. Between 1851 and 1855, however, Vallou made a series of photographs of female nudes that he marketed (and legally registered) as models for artists. Vallou’s nudes have long been associated with those of Gustave Courbet, who is known to have used photographs in his painting process. Although no absolute one-to-one correspondence can be pointed to, the heavy soporific quality of Vallou’s models is very close to Courbet’s concept of the nude, and the reclining figure displayed here is strikingly similar in pose to the painter’s Woman with a Parrot (1866), on view in the galleries for nineteenth-century painting. “ 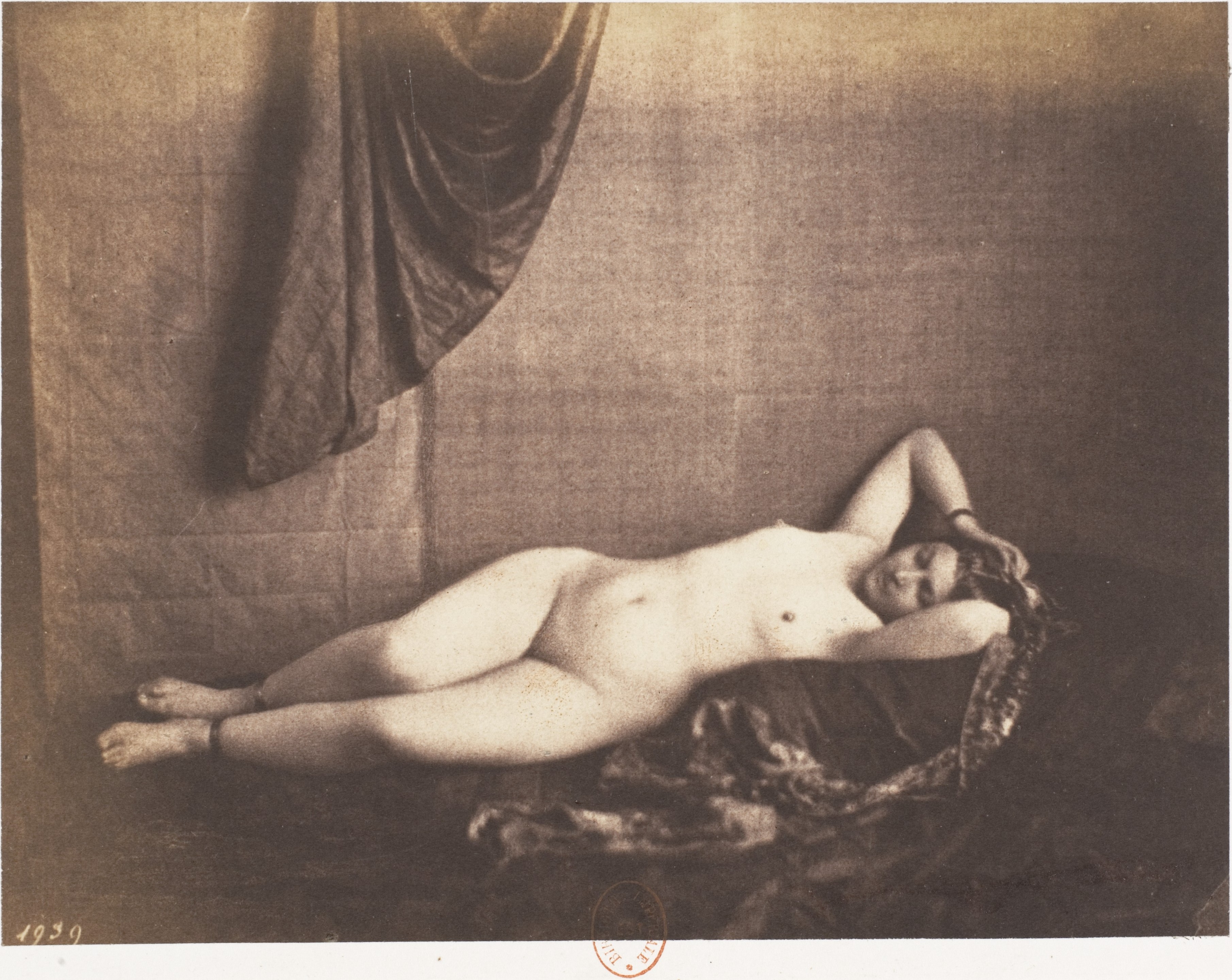 “Julien Vallou de Villeneuve reportedly took up photography about 1842. Because his early photographs have not been identified, it has been assumed that they depicted naked women, a subject for which it was too improper to acknowledge authorship. Although prurient lithographs of courtesans playing with animals and large salon paintings of Oriental odalisques and half-draped Romans could pass the censors, photographs of naked flesh were suspect. Unless they were veiled or adorned and posed to look like painted nudes, the women in the photographs were considered too titillating. Between 1851 and 1855, Vallou made a series of small-scale paper photographs of naked women which he marketed (and legally registered) as models for artists. Whether they were intended solely for artists is arguable, but in order to sell the images openly the photographer had to work into his pictures the paraphernalia of the painter’s studio–rugs, shawls, spears, beads, anklets, turbans, and the like. Despite these moderations Vallou’s nudes were remarkable. Their flesh was tantalizingly real in both weight and texture; indeed, the photographs served Courbet as appropriately lifelike models. This image is one of the most minimally camouflaged. Swiveled to reveal an amphora of thighs, groin, and torso, her extremities and face hazed with shadow, this mid-nineteenth-century Parisian model reclining in a photographer’s studio recalls both Titian and Goya. Vallou gave amplitude and breadth to the perfect pose by visually suspending the model in empty space, like a dream between couch and curtain.” 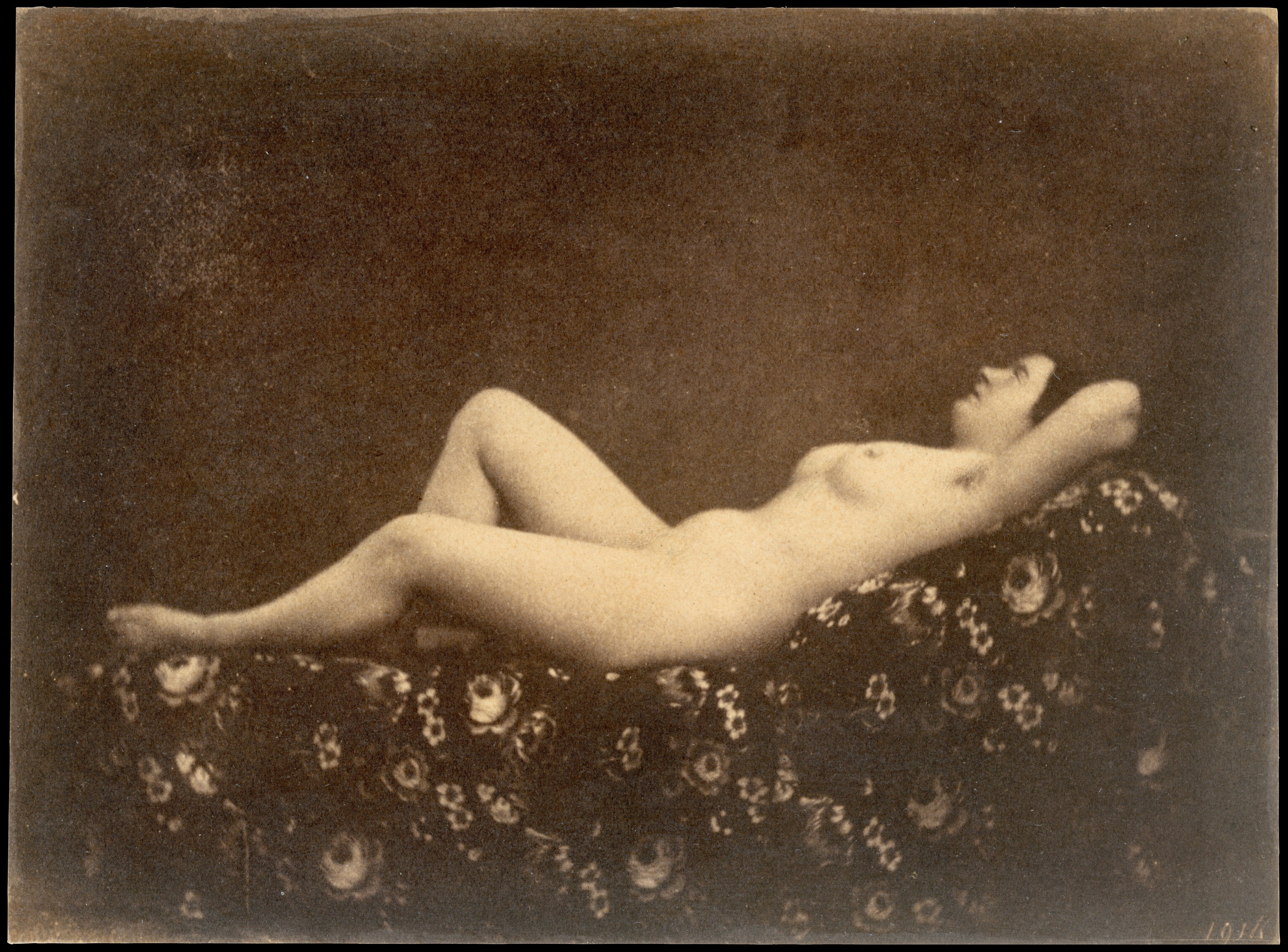 “Despite a long artistic tradition and an obvious delight in the female nude, decorum in mid-century France required that the subject be removed from the reality of the present—shown in mythological guise (Cabanel’s “Birth of Venus,” for example) or as an exotic creature, distant and nonthreatening. The need to provide a legitimizing context for the depiction of the nude was particularly compelling in photography, and Vallou often appointed his models with the paraphernalia of the painter’s studio—rugs, shawls, spears, beads, anklets, and turbans. His most successful pictures, however, are those least encumbered by artificial trappings; revealing more and borrowing less from painterly tradition, these are the most poetic. While tantalizingly real in both weight and texture, Vallou’s reclining nude seems nonetheless to float in an indeterminate and dreamlike space, a crescent moon in a starry sky.”