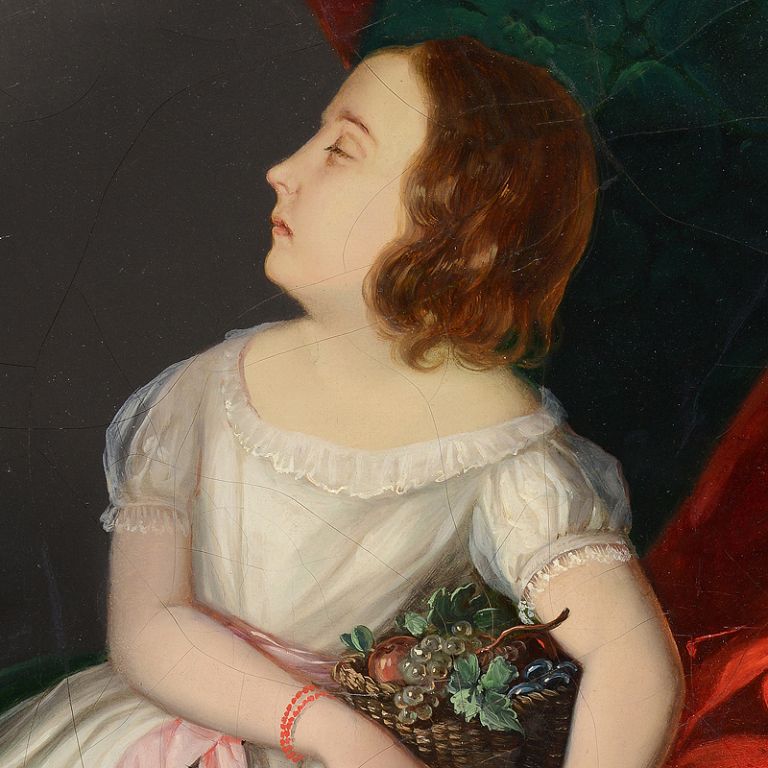 The two featured portraits by Künl, most likely painted circa 1857, have been titled Sleeping Girl and Baby (with Rattle).  They open a special and unexplored chapter of 19th century Biedermaier portraits of children. Namely, both paintings depict deceased little ones. High child mortality rate, especially among infants younger than one year, and the influence of Romanticism’s exaltation of childhood help to explain the reasons for the production of such portraits.

Artistic models for the depiction of deceased babies can be found in Dutch painting of the 17th century, where several different types of post-mortem portraits of children appear. Among the most moving are the depictions of children on their deathbed. Künl’s image of a dead girl relates to the post-mortem photography of the 19th century, where the deceased, alone or together with their relatives, are presented to appear lifelike in their home or in a photo studio.

Künl treated both portraits of the deceased children with utmost sensitivity: colour and lighting are well-considered, the posture, clothes and telling belongings are carefully chosen. The expression on the children’s faces is calm, serene and not suffering. Both images retain a childlike character (toys, the posture of the older girl), and despite the fact that the children are dead, they do not appear morbid. The paintings were meant for the immediate family, especially parents, for comfort and as a lasting memory.

The painter was able to handle the difficult task with subtle realism and dignity. Unfortunately, he himself experienced the pain of losing a child. On 12 August 1867, his firstborn, the 16-year-old Guido Viljem, drowned during summer swimming in the Sava River near Medno.