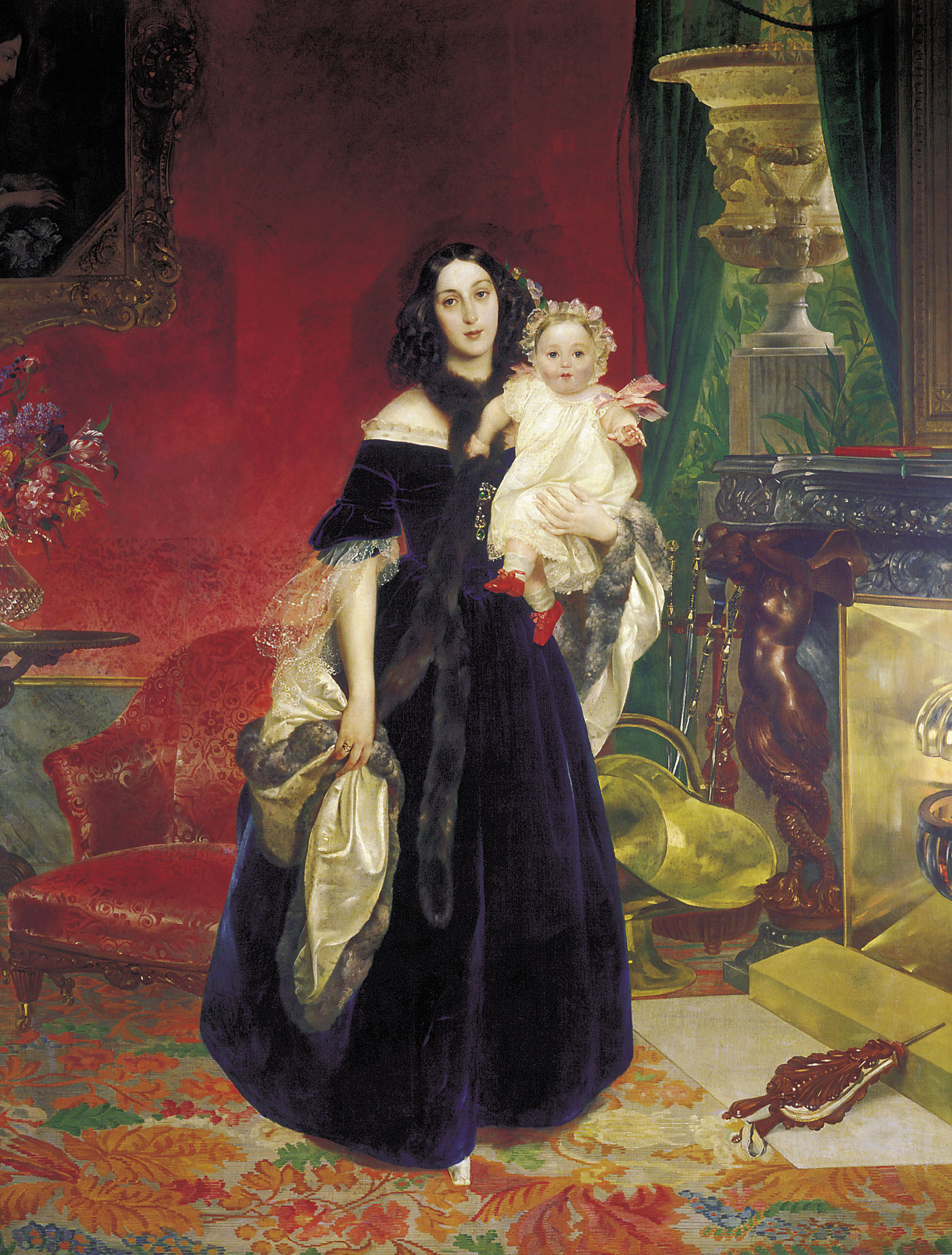 There is an almost identical painting, by the same painter, but without the baby, and she is wearing white gloves. The painting hangs in the National Gallery of Armenia, see this link here, whereas the above one hangs in Moscow in the Tretyakov Gallery, see link here.
. 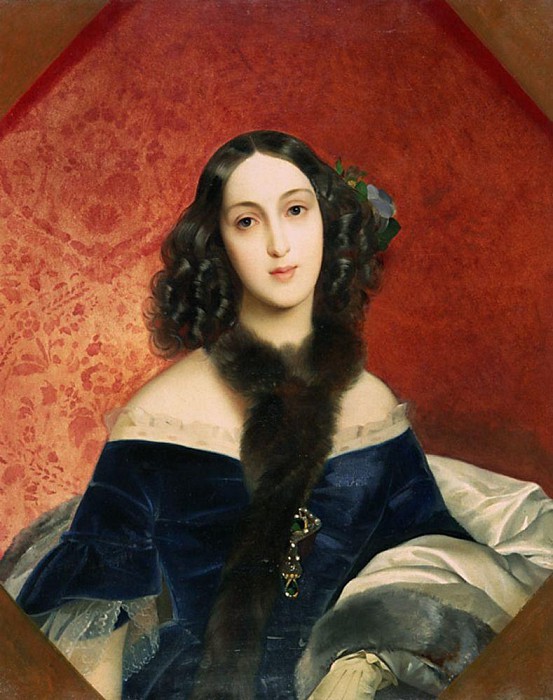 .
Princess Maria Arkadevna Vyazemskaya, née Stolypina (1819-1889), (and from her first marriage her last name was Beck/Bek). She was the granddaughter of Count Admiral NS Mordvinova; the great-aunt of the poet Mikhail Lermontov , and the wife of a prominent figure in Russian culture, Prince Paul Vyazemsky/aka Pavel Petrovich Vyazemsky.
.
Maria Arkadevna was the daughter of Arkady Alekseevich Stolypin and Vera Nikolayevna Mordvinovoj (1790-1834), daughter of the famous Admiral NS Mordvinova. Maria had six brothers and sisters:

And this dashing gentleman was her first husband: 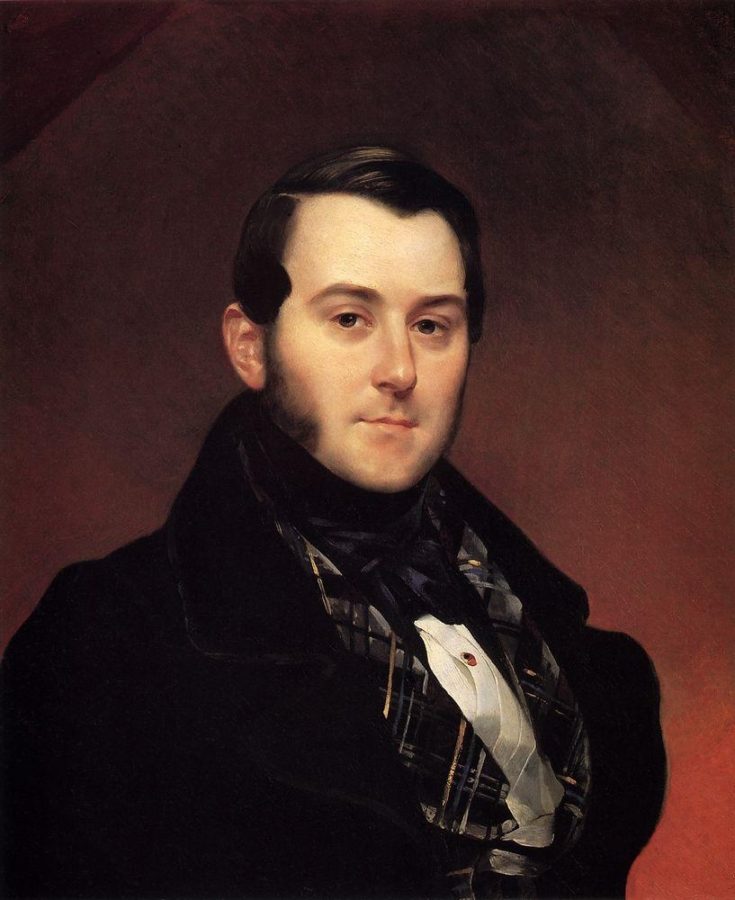 Ivan Beck (1807-1842 ): Russian poet and diplomat, the first husband of Mary Arkadyevna Stolypin. A rich landowner. Beck was at a mission in the Netherlands, together with Prince Pavel Vyazemsky, who soon after Ivan’s death, the prince married his widow, Mary Arkadyevna.

Maria was six years old when she lost her father and 14 years old when her mother passed away. In 1837 Maria Stolypin became the wife of a wealthy landowner Ivan Alexandrovich Beck (1807-1842). The marriage was short-lived and did not bring her much happiness. Her husband fell ill, suddenly went mad and died within the year, in 1842. Maria stayed behind with two young daughters: Maria Ivanovna (1839-1929), the baby on the painting above, and Vera Ivanovna (1841-1912). Maria Arkadyevna was 23 years old when she was both orphaned and widowed and mother of two children.
.
After her husband’s death Maria Arkadevna inherited a large fortune, together with the rich dowry received from her parents. In 1847, in Constantinople, where she visited her sister Vera, she met Prince Paul Petrovich Vyazemsky aka Pavel Petrovich Vyazemsky (1820-1888), son of poet and critic PA Vyazemsky.
.

Vyazemskij Paul and Maria Beck married in Constantinople 17th October 1848. After the wedding, the couple settled in the Russian Embassy in Buyuk-Dere, near Constantinople.

According to Wikipedia the above photo is apparently from after 17th October 1848, and depicts Maria with her second husband, and her two daughters from her first marriage, Maria & Vera. It is peculiar that the girls should have such short hair. They look more like boys. In fact, they might be boys. And the woman might be Vyazemsky’s sister with her two sons. That is according to the website of the Hermitage, see this post here, and my post here. There the caption says: Portrait of Prince P.P. Vyazemsky with his Sister Mary and his Nephews Peter and Alexander Valuev. Which makes more sense, the children really look like boys! I’m amazed how often the information on various websites is contradictory. The sister Mary from the above photo would be this woman here. She was known as Countess Maria Petrovna Valueva (née Vyazemskaya, 1813-1849), daughter of poet and prince Pyotr A. Vyazemsky (1792-1878) and Princess Vera Feodorovna Vyazemskaya.

This is Maria Arkadevna in the 1860s: 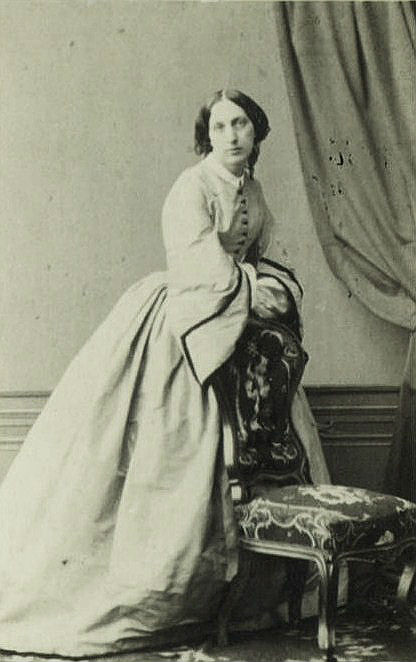 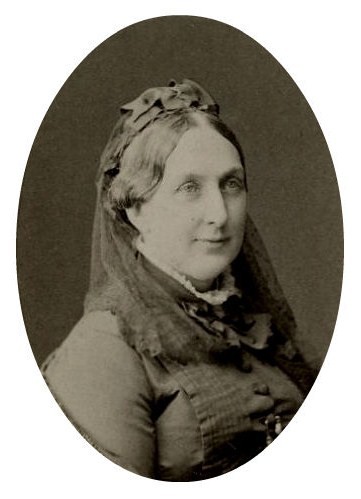