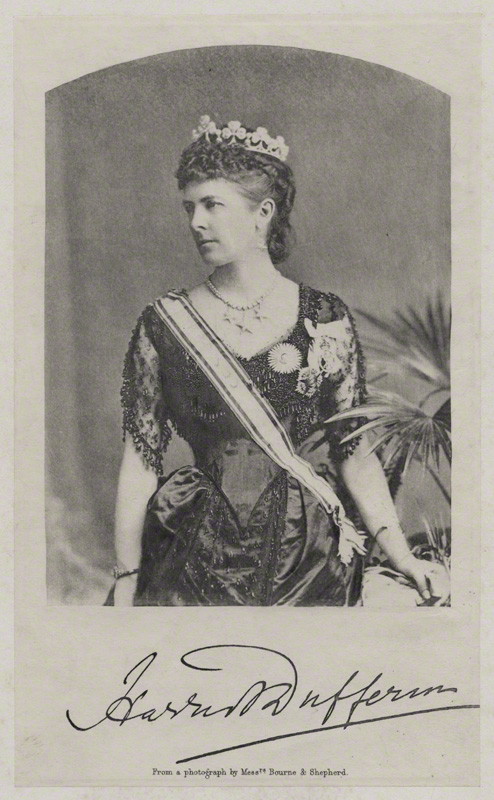 She is wearing the Dufferin and Ava shamrock tiara and star parrure. The same ones as in the image below: 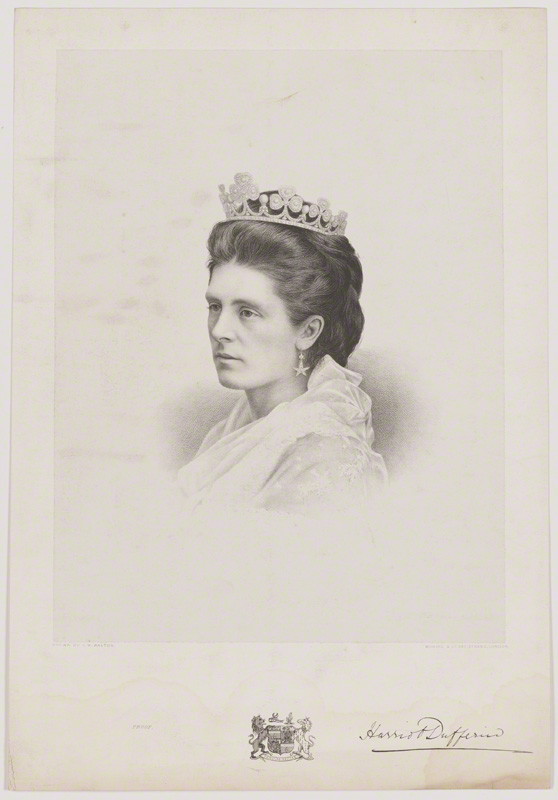 Harriot Georgina Hamilton-Temple-Blackwood, Marchioness of Dufferin and Ava VA CI DBE (5 February 1843 – 25 October 1936) was a British peeress, known for her success in the role of “diplomatic wife,” and for leading an initiative to improve medical care for women in British India.

Born Hariot Georgina Rowan-Hamilton, she was the eldest of the seven children of Archibald Hamilton-Rowan of Killyleagh Castle (now Northern Ireland). On 23 October 1862, she married her distant cousin, the 5th Baron Dufferin and Claneboye at Killyleagh Castle; they later had three daughters and six sons.

Her husband was created Earl of Dufferin in 1871. A year later, she and their children travelled with him to Canada upon his appointment as Governor General, where her assistance in turning Rideau Hall into a centre of social activity included literary readings and presentation of plays in which she herself sometimes performed. Lady Dufferin was one of the most popular of the governor-generals’ wives, and was starting to build up her reputation as “the most effective diplomatic wife of her generation”. Next she joined him as he served as ambassador to Russia from 1879–81, and to the Ottoman Empire from 1881–84, where she received the Grand Crescent of the Turkish Order of the Chefakat in 1883, followed by the Persian Order of the Sun in 1887. In both St. Petersburg and Constantinople, as at all their embassies, the couple were known for their hospitality.

Lady Dufferin then went with her husband to India in 1884 when he was appointed as the country’s viceroy, and set up the National Association for supplying Female Medical Aid to the Women of India (known as the Countess of Dufferin Fund) a year later. This association recruited and trained women doctors, midwives and nurses to improve the situation for Indian women in illness and in child-bearing. As well as the numerous ‘Lady Dufferin’ hospitals and clinics which were established, some of which still exist under that name, there are medical colleges and midwifery schools named after her. This involved her in a great deal of fund-raising and is sometimes referred to as her zenana work; it was celebrated by Rudyard Kipling in his Song of the Women. She received the Crown of India in 1884 and the Royal Order of Victoria and Albert in 1889.

When the Earl’s term in India ended in 1888, they travelled back to their home at Clandeboye in Ireland and her husband was elevated in the peerage as the Marquess of Dufferin and Ava that same year. He continued his ambassadorial career in Europe, and the Marchioness accompanied him to Italy and France. She published her memoirs, based on the letters she had written to her mother: Our Viceregal Life in India (1889) and My Canadian Journal (1891). They retired to Clandeboye in 1896.

After her husband died in 1902, she spent much of her time in a relatively modest house in Chelsea, London, economising when possible to help her sons as the family fortune had been depleted by sales of land and unwise investments. She wrote My Russian and Turkish Journals (1916) and was made a Dame of the Order of the British Empire in 1917.

The first Marchioness of Dufferin and Ava had seven children. None of her sons outlived her: Archibald was killed in the Second Boer War, Basil was killed in the First World War, Terence died of pneumonia, and her youngest, Frederick, was killed in an plane crash in 1930. She died in London in 1936 and was buried at Clandeboye.