Georgina and Marguerite were sisters-in-law. Georgina Cowper-Temple (née Georgina Elizabeth Tollemache) was born in 1822 in Englefied Green in Surrey. She was the daughter of Admiral John Richard Delap Tollemache and Lady Elizabeth (daughter of John Stratford, the Third Earl of Aldborough and Elizabeth Stratford, Countess of Aldborough). Georgina was one of nine daughters and three brothers (Elizabeth, Charlotte, Emily, Selina, Jane, Marianne, Marcia). She married William Cowper-Temple on 21 November 1848. One of her brothers was John, the 1st Baron Tollemache, and another brother was William Augustus. The latter was married to Marguerite Tollemache, also known as ‘Magsie’. Hence the two ladies on the above photograph were sisters-in-law. Marguerite was a niece of the Countess of Blessington and stepdaughter to Charles Manners-Sutton.

William and Georgina Cowper-Temple were significant figures in nineteenth-century Britain. William Cowper-Temple, later Lord Mount Temple, was private secretary to one Prime Minister, Lord Melbourne, and minister in the government of Lord Palmerston. He sought to improve the nation’s health and rebuild London, and amended the Education Act in 1870. His charismatic wife, Georgina, was also champion of diverse social and moral reforms, and friend to John Ruskin, Dante Gabriel Rossetti, Frances Power Cobbe, and Mrs Oscar Wilde. The Mount Temples owned properties in Ireland. At Georgina’s death she left almost all her possessions to Mme Juliet Deschamps, whom she had adopted as a child in 1869. Other bequests went to the Church Army and the Victoria Street Society of Protection of Animals from Vivisection. 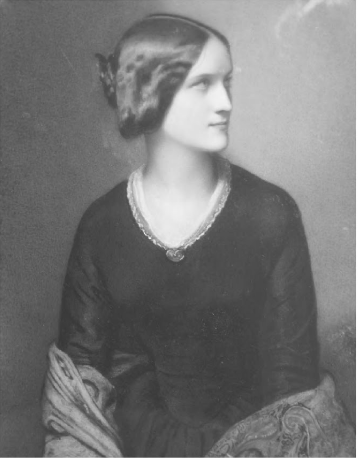 William Cowper-Temple, and his second wife, Georgiana, were prominent figures in nineteenth-century Britain. As a member of the Liberal Party, William was MP for Hertford from 1835 to 1868 and Hampshire South from 1868 to 1880. During the course of his career he was a private secretary to his uncle Lord Melbourne, a junior minister in Lord Palmerston’s government, groom in waiting to Queen Victoria, and held positions on the Board of Health and the Board of Works. William was stepson and heir to Lord Palmerston (who was rumoured to be his natural father) and inherited a number of estates, including the Broadlands estate in Romsey, in 1868. 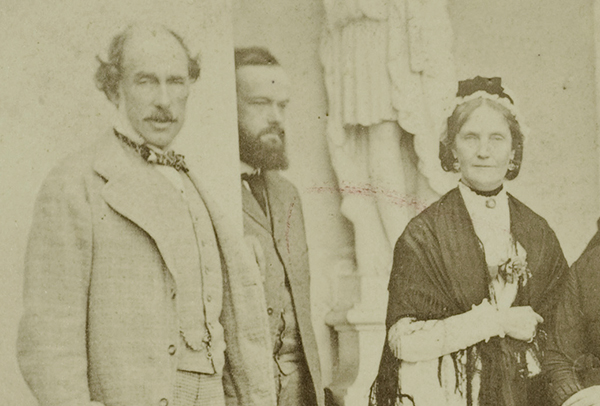 William Cowper-Temple (on the left), and his second wife, Georgiana, nee Tollemache (on the right)

After the early death of his first wife, Harriet Alicia (nee Gurney), in 1843, William married Georgiana Tollemache, sister of the first Baron Tollemache, in 1848. William and Georgiana shared a strong and enduring interest in religious matters. Though never orthodox, William had been closely associated with Evangelicalism since the late 1830s. After their marriage, Georgiana notes that they embarked on a search for religious truth. This led to their acquaintance with Evangelical figures such as Henry Drummond and Christian Socialists such as F.D.Maurice, Thomas Hughes and Charles Kingsley. It also led to their association with a number of unorthodox figures, including the American “theo-socialist” Thomas Lake Harris.

Georgiana had a particular interest in mysticism and an eagerness to engage with spiritualism and other esoteric religions as a means of truth seeking. The death of her mother had a strong influence on her belief in a connection between earthly life and the spiritual. Despite not all their acquaintances sharing an appreciation for the practice, the Cowper-Temples mixed with leading spiritualist figures from Britain, American and Europe, and attended a number of séances (spiritualist meetings to communicate with the dead).

However, the most notable manifestation of their religious activities was to be the annual ecumenical conference held at Broadlands between 1874 and 1888. Precipitated by the Holiness movement in America, the 1870s saw the emergence of the Higher Life movement in England. Named after William Boardman’s book The Higher Christian Life (published in 1858) the main aim of the movement was to help in advancing the Christian’s progressive sanctification, and enable one to live a more holy, less sinful, life. Though principally Evangelical, the movement was seen as non-denominational. Together with William Boardman, two other key figures helping to spread the holiness message in England were Robert Pearsall Smith and his wife, Hannah, both of whom were acquainted with the Mount-Temples and were involved in the conferences at Broadlands.

The first conference took place over six days in July 1874 and was designed to deepen the work of sanctification through prayer, the reading of scripture, short addresses, and the discussion of personal experience of grace. The beautiful surroundings at Broadlands aimed to create a “foretaste of heaven” with many of the services taking place under the beeches or in the orangery. Among the hundred guests attending were George MacDonald, Andrew Jukes, Edward Clifford, Catherine Marsh, Lady Gainsborough, George Wilkinson, Stevenson Blackwood, Theodore Monod and Professor St Hilaire.

While the conferences have been criticised for being private gatherings of titled persons hosted by wealthy aristocrats, over the years they were to attract a diverse range of people from across both denominational and social divisions. James Gregory notes that “the conferences expressed hope that believers of all denominations could meet and demonstrate the validity of their belief through Christian love and ‘faith in that great and blessed truth that God loves the creatures He has made’, rather than in doctrine.” 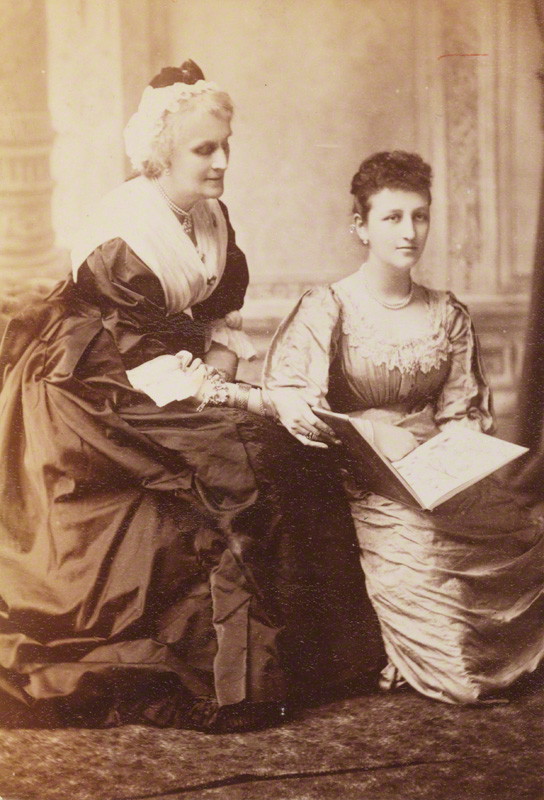 William Francis Cowper-Temple was the Baron of Mount Temple at Broadlands in Southern England. He held many and various political positions throughout his life and indeed came from a very political family, his stepfather, Lord Palmerston, having been Prime Minster twice and his uncle Lord Melbourne once. One of the oddities of George MacDonald’s life was how he managed to maintain close friendships with people who had a dislike, or even a grudge, toward one another. He was friends with both John Ruskin and F.D. Maurice, although Ruskin disliked everything about Maurice, even referring to one of his books of written sermons as among the worst he had encountered, but praising MacDonald’s 1st volume of Unspoken Sermons as the best he had ever read. MacDonald also had the friendship of both Lady Byron (widow of poet, Lord Byron) and Cowper-Temple even though Lord Byron had a well publicized affair with the wife of Cowper-Temple’s uncle, Lord Melbourne many years earlier. Lady Byron had been separated from her late husband after only one year of marriage however, largely due to his many (and sometimes strangely perverted) infidelities, so Cowper may have actually felt some sympathy for her. Still, there was most likely a certain amount of awkwardness between the two of them.

William Cowper-Temple and his wife, Georgina, are probably best known today for the spiritual conferences hosted on their estate at Broadlands during the late 1800s. It must be remembered that during this period in time, especially in Great Britain, interest in Spiritualism was gaining great popularity even among Christians. One might surmise that since the Church of England held little interest in what are typically referred to as “the gifts of the Spirit” by Christians, that Christians who were involved in, or at least had an interest in, spiritual gifts might have attended Spiritualist meetings in order to fill a need in their lives that the Church was neglecting. At any rate, the summits at Broadlands were among the first truly Ecumenical Spiritual conferences ever attended. It was quite common to find Christians together with Hindus, magical folklorists, mediums, and other adherents of wide-ranging diversity brought together with a common interest in the spirit world. It must be said however, that these meetings often went well beyond the comforts of mainstream Christianity, and on many occasions séances were held. Broadlands was also the center concerning meetings of civic and political natures. MacDonald would lecture there often on Christian and literary topics. He also would spend many a night at this mansion whenever he passed through the area. There is no evidence however, that George MacDonald approved of the more magical or occult-like activities which occurred at Broadlands. The only mention he ever made of these séances was one that Ruskin had attended that had a profound effect on the famous art critic. Actually, he never mentions the séance itself, but he states in a letter to his wife, Louisa, that he had one day met the clairvoyant in question that held the séance Ruskin attended (we know it was a séance from a letter written by Ruskin) and that he took somewhat of a dislike to her.

There is a book about Georgina’s life: Reformers, Patrons and Philanthropists: The Cowper-Temples and High Politics in Victorian England (Library of Victorian Studies) by James Gregory. 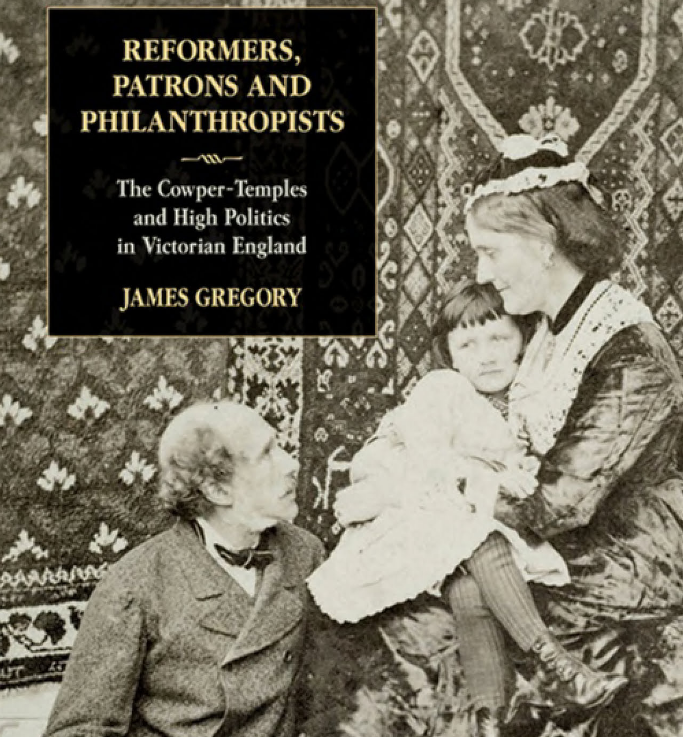 Georgina in the last years of her life: 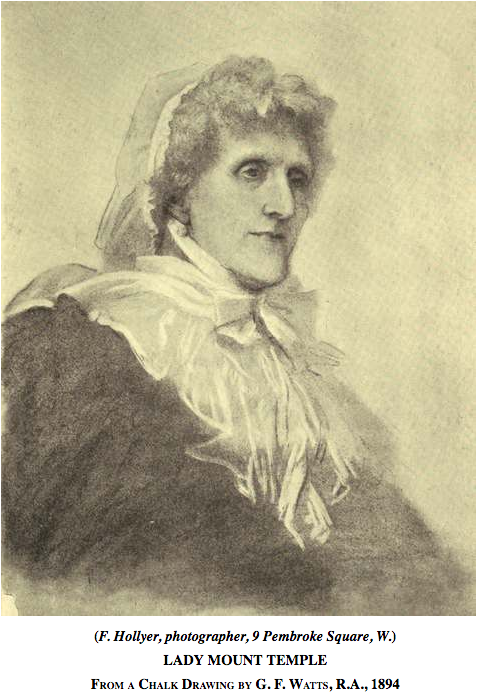 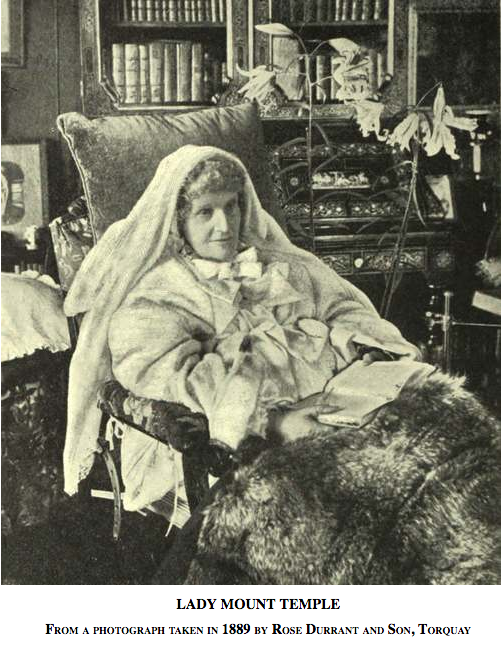 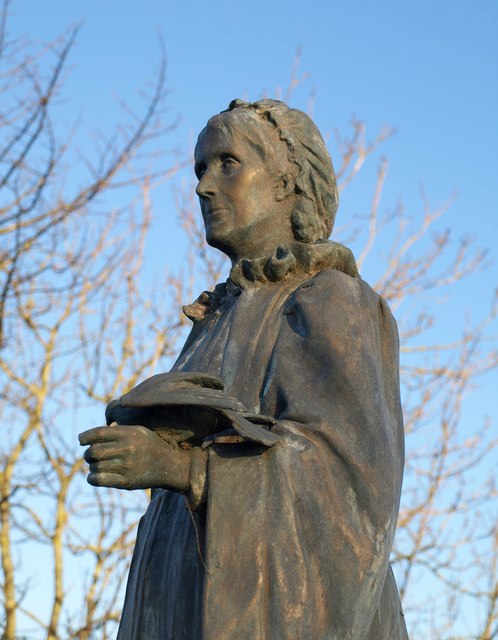