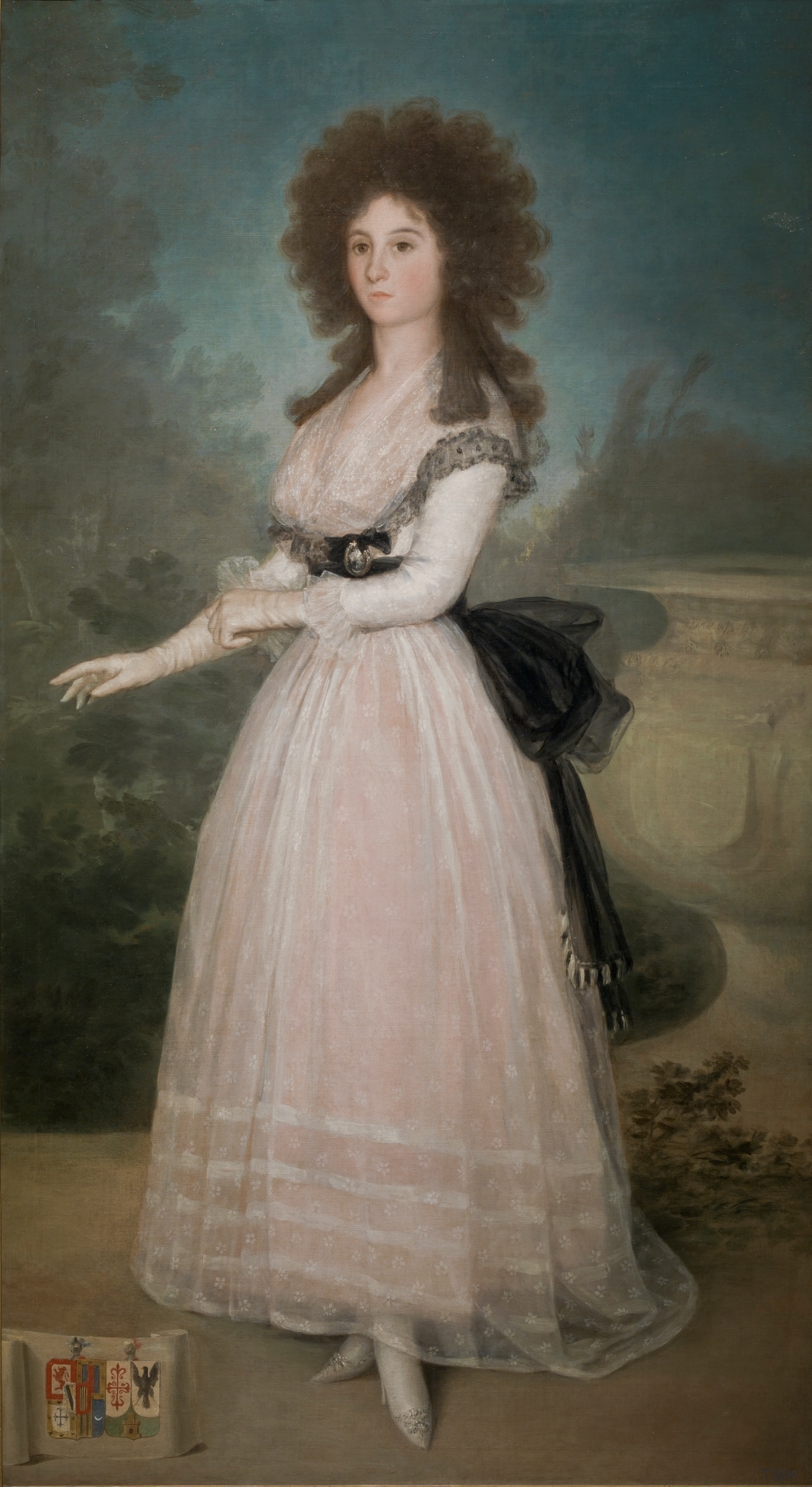 This portrait presents the lady at full length, dressed in the fashion of the time in a tulle gown with lace details. Goya perfectly captures the translucence of the fabric, through which we see the shimmer of the pink skirt the sitter wears underneath. At her waist the lady wears a wide black tulle band, which is also semi-transparent, and on the waistband she has pinned a lovely cameo brooch. Her hair, its abundant dark curls falling over her shoulders, reflects the French fashion of the moment, and her attire is completed by pointed-toe slippers with silver decorations and lambskin gloves, whose supple texture Goya has masterfully captured. Goya presents his model as though the viewer had come upon her in the act of pulling on her right glove, a detail that gives the portrait a relaxed and informal air and has the effect of bringing us into her world. These were qualities for which Goya was very much appreciated as a portraitist, and which he had learned from his English contemporaries, whose work he would have been familiar with through prints.

Another English touch is the idea of portraying her in a garden, which forms the backdrop of the painting. Behind the lady we see a large marble urn with a coat of arms, and farther back we have a glimpse of cool foliage, with the grayish-green of the trees and plants. The natural setting in which the lady is framed, combined with her attitude and pose, persuades us to see her beauty as fresh and spontaneous, rather than artificial and contrived-although paradoxically, it is clear that both her attire and the presentation obey social and pictorial conventions. All this, combined with the somewhat cool gray-green tones of the picture and the inexpressiveness of the lady’s face, in contrast with the great care taken with details such as the lace and embroidery on the dress and the coat of arms, have suggested to some the hand of another of the favorite portraitists of the House of Osuna, Goya’s friend Agustín Esteve (1753-ca. 1820), with whose pictorial technique there are unquestionable similarities here. Still, in 1786, Goya had painted his splendid portrait of the Marquesa de Pontejos (National Gallery, Washington, dc), which has similar characteristics, although the latter is a canvas of evident originality and brilliant technique, revealing a profound character study of the young subject.

Identification of the lady in this portrait was made possible by the very detailed coat of arms in the lower left corner of the painting. She is Tadea Arias, who was born in Castromocho, Palencia, in 1770. She married Tomás de León, a captain who had retired from the American Regiment, and when she was widowed she took a new husband in 1793: Pedro Antonio Enríquez y Bravo, a captain in the infantry and a counselor-for-life in Vélez-Málaga, where the couple made their residence. Tadea was widowed yet again, and again remarried, this third time to Fernando Villanueva y Pardos.

The coat of arms, of the house of Arías joined to the house of León, indicates almost certainly that the portrait was done during Tadea’s first marriage-perhaps, indeed, specifically for that occasion, which took place in 1789. Her first husband had belonged to one of the Duke of Osuna’s regiments, and his brother was the administrator of the Duchess of Jabalquinto’s family’s assets. Pedro de Alcántara Tellez Girón y Beaufort Spontin (1810-1844), tenth Duke of Osuna and possessor of more noble titles and rents than any other person of his time, was one of Goya’s most important clients, and that may explain the connection between Tadea Arias, a member of the lesser nobility, and Goya (Mena Marqués, M.: El Greco to Goya. Masterpieces from the Prado Museum, Museo de Arte de Ponce, 2012, p. 128).